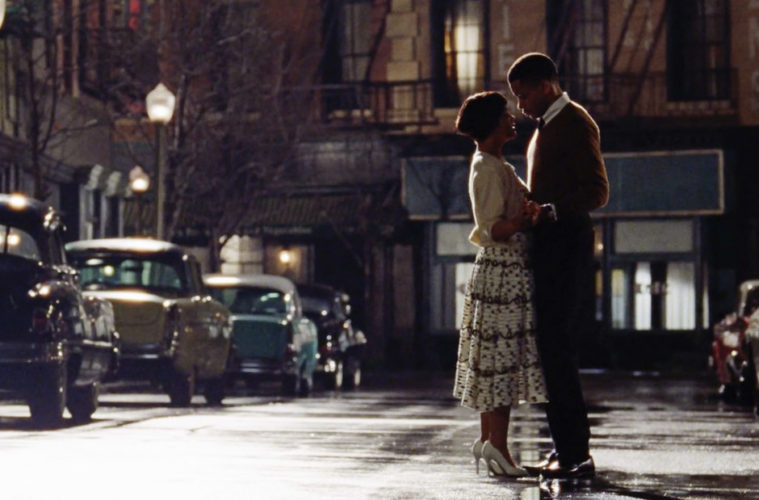 Lush and elegant with beautiful performances, the jazzy period melodrama Sylvie’s Love plays many notes exceptionally well. It’s a shame its plotting and pacing doesn’t keep up with its star power. The always-excellent Tessa Thompson stars as Sylvie, a young woman that works in her family’s Harlem record shop in the late 1950s. She’s there to watch TV mostly, keeping up appearances as her mother is the head of a local charm school and they cannot afford an employee. Enter Robert (Nnamdi Asomugha), an aspiring musician who comes to ask for a job. Much to Sylvie’s surprise he’s hired on the spot–perhaps Sylvie’s dad can just tell.

Sylvie’s hand in marriage has been long promised to Lacy (Alano Miller), a professional who comes from a wealthy and powerful family that has seemingly transcended racial barriers and found themselves in some of New York’s elite circles. After resisting Robert’s charms they give in one summer night under the stars and Sylvie finds herself pregnant with Robert’s child.

Written and directed by Eugene Ashe, Sylvie’s Love plays the notes of a Sirkian melodrama with elegant period production design as Sylvie grows from a young adult into a career woman working her way from the switchboard to the producer of a cooking show on a local channel. Chronicling her ups and downs, the film shies away from other richer emotional complexities. Her daughter is rarely seen and the film’s focus starts to include Robert’s career where he faces many of the same challenges of Motown acts of the era, not owning their own publishing. Everyone around the band is getting rich, including his manager (Jemima Kirke), while he remains working class. This strains his relationship with Sylvie as he sets out for the long drive to Detroit to make a name for himself in a changing industry.

The picture grows clunkier in its third act with abrupt scenes that feel as if Ashe is cramming to complete a story that might be best left a bit ambiguous. The first act is skillfully crafted as Robert courts the reluctant Sylvie over work breaks, in jazz bars, and on rooftops. They eventually reconnect after a performance in which Sylvie finds herself alone. Ashe never quite lingers on that loneliness as Sylvie pushes through events, including her own father’s wake. She buries her head in the sand to make a career and a life for herself despite Lacy’s desire to have a wife that he can take to business gatherings.

Plotting and pacing asides, Sylvie’s Love is a rich and graceful picture in passages. It may feel too long as the narrative hits familiar beats, but it’s still somewhat revolutionary as a document of upper-middle-class African American life. Perhaps another pass by editor Dana Congdon before its next engagement will yield a richer picture. Sylvie’s Love is the kind of film that certainly would have not gotten made (at least by a major studio) in the 1960s. The drama is infused with personal politics as both Sylvie, Lacy, and Robert do what they need to for their careers, yet certain details of their careers are the least interesting thing about the film.