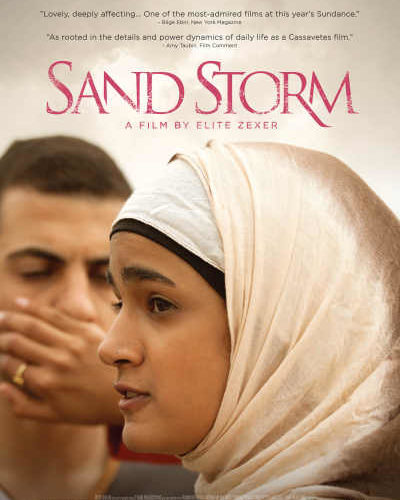 Scattered across the Negev desert of southern Israel are dozens of small Bedouin settlements. Unrecognized by the state, these towns lack electrical, water, or sanitation services. It’s against this milieu that young Layla (Lamis Ammar) frequently stands, her sense of adolescent uncertainty acutely literalized by the endless rocky expanses and rickety contraptions made of discards. She sees a more invigorating life, one not shackled to tradition, in her secret boyfriend, Anwar (Jalal Masrwa). However, Layla’s mother, Jalila (Ruba Blal), uncovers this relationship and moves to tamp down on every smidgen of rebelliousness.

Despite that descriptor, Sand Storm does not follow the standard tropes of the “restless youth in a repressive culture” story. This movie explores both mother and daughter’s perspective fully, and it doesn’t box either into the role of unbending matriarch or plucky protagonist. Jalila tries to head off Layla’s romance not just out of a sense of tradition and propriety, but also out of understandable frustration. The story opens with Jalila having to host her husband Suliman’s (Hitham Omari) wedding to a second, younger wife. She’s feeling the pressure of their environment just as acutely as Layla, if in a different way. The movie’s sympathies extend even to Suliman, who is not a one-dimensional embodiment of the patriarchy so much as an only semi-willing extension of it. He struggles to reconcile his love for his family with what he thinks are everyone’s natural positions in life. Members of an ethnic group left to fend for themselves, each of these characters can only make do with the best they can.

First-time writer-director Elite Zexer, who based her script on 10 years’ worth of interaction with Bedouin women, favors an understated visual sense and measured editing. The movie silently observes its characters without judgment, inviting identification through long takes of everyday moments. Jalila and Layla struggle to rejuvenate a non-functioning generator, bickering in a microcosm of their whole relationship. The tension builds until there’s a physical snap. It’s perhaps predictable — and one example among others of conventional scenarios; of course a bag of produce isn’t going to be anywhere but splattered on the ground by the end of an emotionally-charged scene — but the marvelously nuanced acting helps carry everything along.

Sand Storm culminates in a decision that sounds downbeat but is instead weirdly uplifting, even if it is also bittersweet. It’s a concession to tradition that’s born not out of defeat, but of solidarity between women. While Zexer might not yet have a directorial voice, her story sense is sharp, and the fulcrum of her ending is one of the most heartbreaking, beautiful sacrifices in recent cinema.

Sand Storm premiered at the 2016 Sundance Film Festival and opens on September 28.