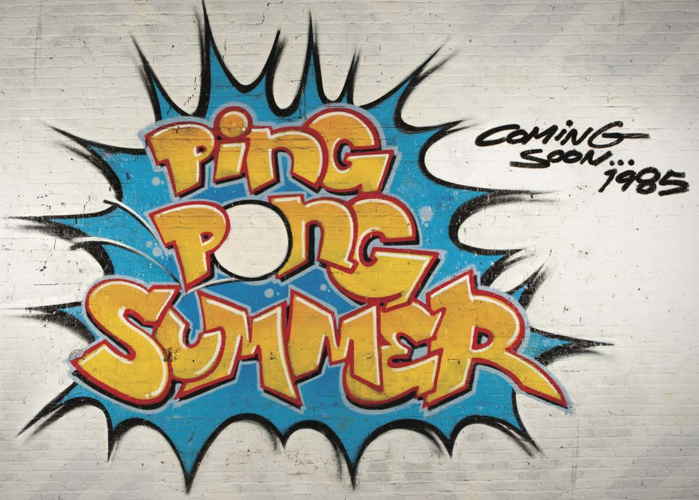 Nostalgia can be an unwieldy tool in the world of filmmaking. Few features manage to effectively capture the charms of a certain time period, either going overboard to the point of exhaustion or poking fun of them so much it starts to feel disingenuous. Thankfully, Ping Pong Summer, which premiered in the NEXT section at this year’s Sundance Film Festival, takes us back to the 1980’s with charm, reverence and light, fun humor.

Specifically taking place in the summer of 1985, we’re introduced to Rad(ford) Miracle (Marcello Conte) as a 13-year-old who follows the reserved beat of his own drum. Although outwardly timid, he’s inwardly alive, practicing his moonwalk (with parachute pants to match), beatboxing, and love for hip-hop (courtesy of his modestly sized jukebox). Not dissimilar to last year’s Sundance hit The Way, Way Back in tone and structure, Miracle and his family venture to Ocean City, Maryland for the summer and his passions finally come to life. Upon meeting a friend (Myles Massey) with the same interests, the two venture to the local arcade house, which also contains a single ping pong table. In what will become his shrine for the summer, they begin to practice, only to be interrupted two local rich, teenage brats (Joseph McCaughtry and Andy Riddle). As they dueling pairs go back-and-forth the rest of the summer, the film turns into a rousing sports film of the ’80’s, leading to a championship ping-pong match. This thread is paired with Miracle’s desire to fall in love for the first time, with an alluring local girl named Stacy Summers (Emmi Shockley), who is addicted to a concoction that’s hinted to include it’s share of drugs.

Above all, writer-director Michael Tully nails the vibe of the era he is capturing. On the technical side, from the impressive intro credit animation, featuring a litany of colors and ping-pong paddles to swipe transitions to freeze frames on action during a match, it’s all done in a loving manner. There’s also a handful of authentic gestures found in the script, with our lead playing a certain water-ring game that triggered memories of my own, as well as smelling the inside of his cassette tapes when he cracks it open for the first time, and an entire sequence dedicated to Slurpees.

Perhaps the biggest initial draw for some will be Susan Sarandon, who is set up as a creepy neighbor than given a fairly obvious arc down the road. While she has a number of entertaining lines, much of the film’s humor is derived from our two confronting pairs, with the cohort of the “evil” group delivering inexplicable one-liners that connect. While the film feels overly familiar in plot, it’s lightweight, pleasurable tone causes it to glide by. Not all the jokes land, but if one is looking to return to the ’80’s for 90 minutes, it’s hard to find a recent film more honestly depicting the era than Ping Pong Summer.

Ping Pong Summer premiered at Sundance Film Festival 2014. One can see our full coverage of the festival below.