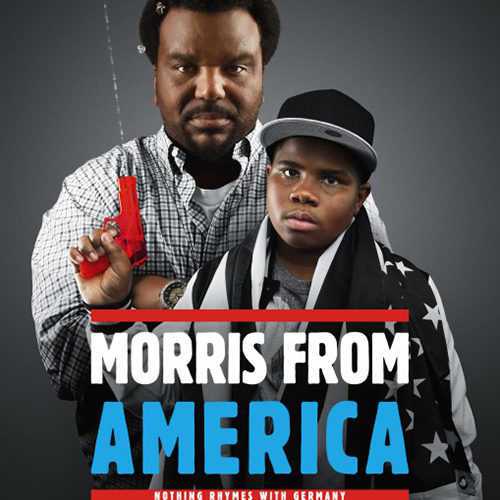 Coming to Sundance with his tender character study This is Martin Bonner a few years back, director Chad Hartigan triumphantly returns with the coming-of-age comedy Morris From America, a stylistic leap forward that still retains a keen sense of humanity. Telling the story of our title character attempting to keep his identity while making friends in the foreign land of Germany, it’s also an acutely funny testament to single parenting and the specific bond it fosters when both sides put in their all.

Originally from Virginia, Morris (Markees Christmas) and his father Curtis (Craig Robinson) now live in Heidelberg, Germany, with the latter working as a coach for a local soccer team and the former trying to acquaint himself as a stranger in a strange land. With a deep love for hip-hop, passed on from his father, he crafts his own rhymes to practice alone in his bedroom.

Outside of hanging out with his father, his only real social life is learning German from his teacher (Carla Juri). In order to spur some growth in this department, he joins the local youth center. It’s there he finds an immediate attraction to the charming Katrin (Lina Keller) and he starts to grow infatuated as she’s the only classmate who befriends him.

While this sounds like a coming-of-age story we’ve heard countless times, Hartigan brings a rare warmth and vibrancy to both the script and style. “Parents kill more dreams than anybody,” a quote from Spike Lee, hangs in the room of Katrin, who has a strained relationship with her overbearing mother and never-seen father. Juxtaposed with Morris’ dad, he exclaims his duty is to guide his son in experiencing everything possible. Whether that’s exposing him to the music he loved growing up, banding around dick jokes or wanting to genuinely be a part of his son’s life, their relationship is one of the most authentically realized in recent memory.

In molding the certain heartbreak the comes with your first love, Hartigan impeccably places us into Morris’ headspace. Accentuated slow-motion shots of the intimate experience of sharing your favorite music and having a first dance are captured with a heightened sensory overload brimming with euphoria. As he excelled with in Martin Bonner, Hartigan also incorporates slow zooms to convey more information in a single shot, building a rhythm as captivating as the pitch-perfect score from Keegan DeWitt and Morris’ own, personal raps. Shot on location in Germany, the vibrant, colorful cinematography and production design ideally gels with Hartigan’s humanistic touch. Even if Morris’ romantic ideals don’t come to fruition, there’s a biting sense of harsh, authentic reality as it pertains to the decisions made by other characters. A culturally specific story is being told, but the film’s familiar structure helps to add a commonality for any viewer.

In one of the many touching and insightful monologues from Curtis, after he learns of some profane lyrics from his son, he tells him to write from what he lives and breathes in everyday life. It could’ve easily been a didactic speech we’ve heard from countless on-screen parents — and even a version in our own lives at some point — but the film’s affirmative spirit forms an unshakable energy. Morris From America is as much about holding on to your way of life as it is figuring it out in the first place.

Morris From America premiered at the 2016 Sundance Film Festival and opens on August 19.