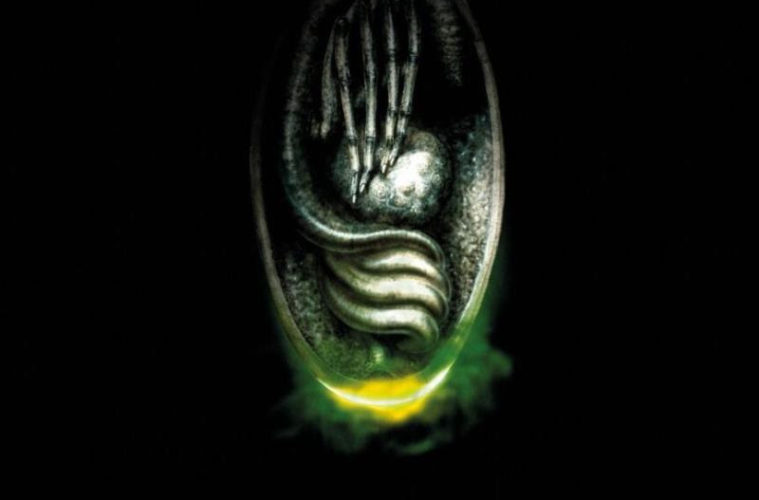 Four decades after its release, it’s become etched in cinema history that Ridley Scott’s Alien was a landmark achievement in not only the science-fiction genre, but horror as well, and specifically the feat of nightmarish imagery that now exists in the deepest corridors of our collective conscious. As the compelling new documentary MEMORY—The Origins of Alien explores, the space odyssey “didn’t come out a vacuum.” Rather, it was an immensely collaborative effort that drew on paintings, novels, films, mythology, current events, and centuries-old sociological and ideological issues to conjure such a masterpiece.

Following up 78/52–Alexandre O. Philippe’s feature-length dissection of the infamous shower scene in Alfred Hitchcock’s Psycho–the majority of his new film once again zeroes in on an iconic scene: the chestburster sequence in Alien. (To give you an idea of how much time is spent on it, they originally toyed with calling the film Chestburster.) In a creatively beneficial decision to not just focus on a single sequence however, Philippe takes a more expansive eye that his repetitive previous film, exploring the mind-shaping upbringing of Alien screenwriter Dan O’Bannon, the history-making participation of H.R. Giger, and the tremendous vision of Ridley Scott in what be only the director’s second feature.

Diehard fans of the franchise have likely already pored over the plethora of special features, interviews, and articles related to the making of the film and so while Philippe may not bring a vast amount of new information to the table, he does construct all the various elements that led to Alien in absorbing ways. New interviews with co-writer Ronald Shusett, actors Veronica Cartwright and Tom Skerritt, widows Diane O’Bannon and Carmen Giger, and more are shown alongside archive interviews with Dan O’Bannon, H.R. Giger, and Ridley Scott, inventively formatted with the widescreen aesthetic in mind as if we’re watching them from a monitor on the Nostromo ship.

One of the more compelling ideas in the documentary is refuting the auteur theory in how the film would have been entirely different if any one of the minds involved had total creative control. Screenwriter O’Bannon, who grew up faking UFO landings with his dad in rural Missouri, was refuting the clean-cut domesticity of the 50s and 60s, creating precisely what they weren’t getting as a culture. The first 30 pages of his original script Memory (where the film’s double meaning of a title comes from) would become Alien, but without involvement from Shusett and others, it could’ve easily become more comedic like his first project, John Carpenter’s Dark Star. As O’Bannon suffered from Crohn’s disease–the feeling of someone eating him from the inside, and which would end up killing him–it also was part of the inspiration for the chest-bursting scene.

When it comes to Giger, the documentary explores his complicated relationship with Hollywood, from Jodorowsky’s Dune (itself the subject of a fascinating documentary and the collapse of which at least led some of the creative team to Alien) to getting initially fired because Fox was too grossed-out by his design for the facehugger. With a wealth of concept art and behind-the-scenes footage of the elaborately detailed sets, MEMORY shows just how invaluable his coldly erotic, Francis Bacon-inspired designs were to the film, and the unfathomably perfect timing of the release of Necronom IV, which caused Scott to immediately recruit Giger.

Leading to Scott–taking over from Walter Hill, who hated the script and opted to do Southern Comfort instead–his involvement helped elevate it from a $2 million project to a budget five times that. As illogical, but beautiful rain pours down and sound design that predicts a creature is among us, the documentary shows the difficult feat of the patience and atmosphere Scott builds leading up to the chestburster scene, in which terror-inducing darkness is swapped for bright-as-day safety to catch viewers off guard. While Sigourney Weaver didn’t partake in interviews for the documentary, it’s explored how her character of Ripley was a symbol of repressed feminine retribution based on the collective guilt of overbearing masculinity throughout history, with depictions of male rape and penetration that somehow bypassed executives at 20th Century Fox.

Philippe also touches on the film’s correlation with the unraveling of idyllic family life in the 1970s (represented here with two other 1979 films, Kramer vs. Kramer and Manhattan). There was also the shared paranoia around Vietnam War, Watergate, and serial killers like Ted Bundy, showing a generation that was cathartically awaiting the horrors that Alien depicted. This is a crew that has a familial bond, one that deteriorates as something horrible comes with nothing to stop it. One piece of brilliant insight is how the blue-collar crew of the ship (played by Harry Dean Stanton and Yaphet Kotto) were right all along about how to stop it, and the Altman-esque way of naturalism in which Scott explores these dynamics of a class divide.

Some could argue the film works better as a home video extra, but in a world where distributors care less and less about producing special features to give insight into the creative process, it’s heartening to see other directors taking it in their own hands in a more polished way, with ample time for reflection. While the majority of the back half of the film is dedicated to the chestburster scene–perhaps in an unbalanced way, as the film’s earlier threads get eluded–Philippe also leaves room to briefly look at the future of the Alien franchise, with a dig at Alien: Covenant’s rather generic version of the iconic scene. He also ponders why in these new prequels, Ridley Scott is now obsessed with the mythology of the created destroying their creator–perhaps a not-so-subtle nod at the ouroboros that is fandom culture.

“I didn’t steal from anyone. I stole from everyone,” Dan O’Bannon said. Even if may have been inspired by the likes of films such as It! The Terror from Beyond Space, The Thing From Another World, Planet of the Vampires, and Queen of Blood, as well as the messages of imperialism in Joseph Conrad’s and H.P. Lovecraft’s vivid voyage in At the Mountains of Madness, MEMORY cogently shows the perfect synthesis of collaborators needed to take science-fiction in a bold, dark new step. One of the many talking heads that pop up throughout says Alien was “one of the biggest cultural dreams we’ve ever had,” and the greatest testament to Philippe’s new documentary is that it’ll make you want to relive it immediately.

MEMORY—The Origins of Alien premiered at the Sundance Film Festival and opens on October 4.