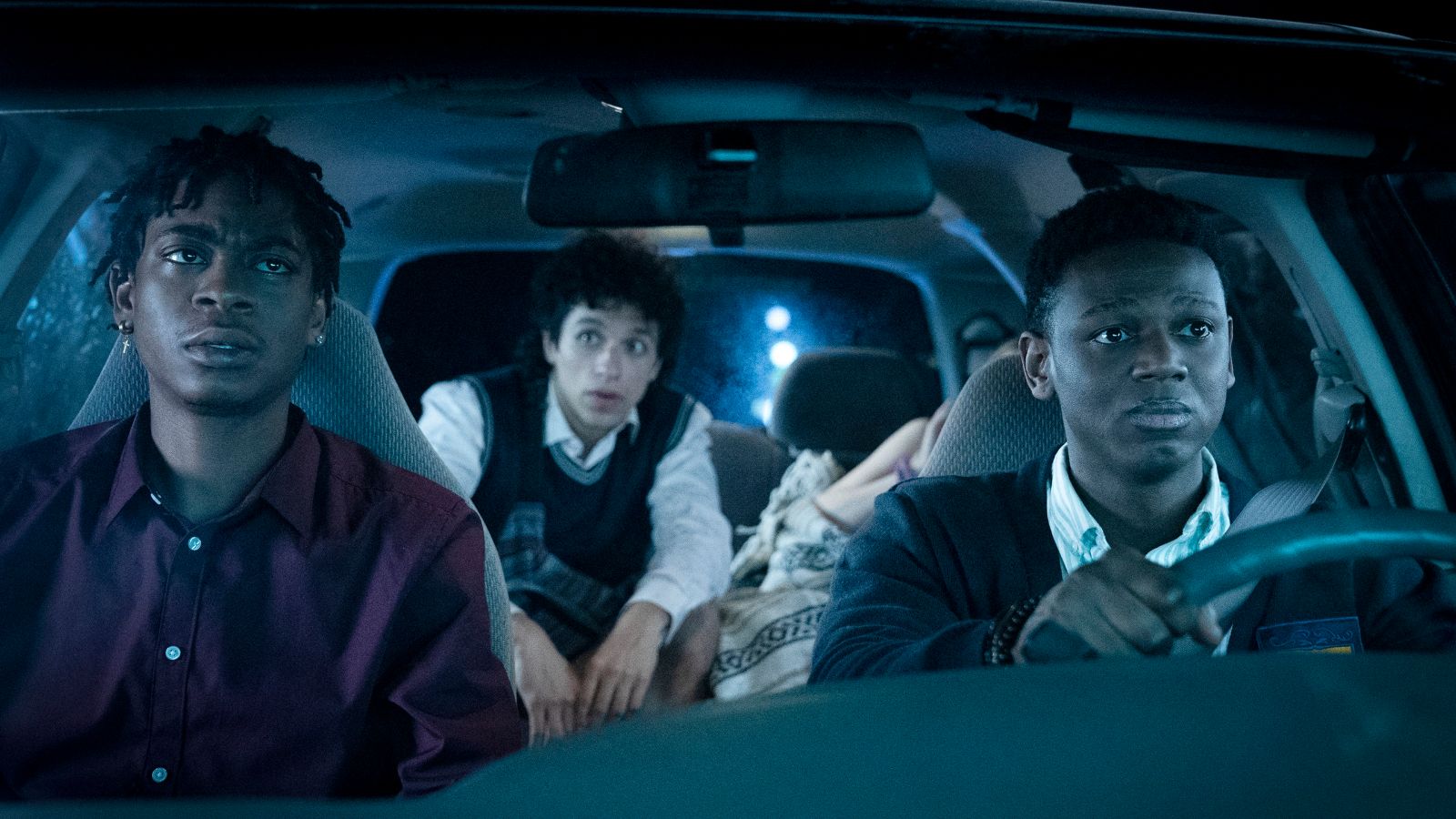 Emergency starts out like a typical college-aged comedy. As the school year ends, two protagonists—Kunle (Donald Watkins) and Sean (RJ Cyler), best friends with divergent personalities and points of view—prepare for an epic night out, aiming to become the first Black students to complete their university’s legendary seven-leg frat party tour. It’s easy to envision this alcohol-induced adventure turning into a checklist of romantic hookups, drunken confessions, and drugged-up shenanigans. But those cliches are all just decoration in this “night gone wrong” drama, which has much more on its mind than coming-of-age hijinks.

When the pair arrives home to change and pregame they find a white girl passed out on their living room floor. Considering the optics and potential life-threatening risks of a police encounter with three people of color, Kunle, Sean, and their Latino roommate Carlos (Sebastian Chacon) frantically huddle, decline to call an ambulance, and take matters into their own hands. It’s a sobering, racially charged setup from director Carey Williams and writer K.D. Dávila, expanding on their 2018 short of the same name, which won Sundance’s Special Jury Award and ended with a white neighbor smoothing things over with authorities.

Williams and Dávila avoid that escape hatch in their feature-length version. Instead the anxiety-riddled trio piles into Sean’s van and takes off with the intention of dropping their nearly unconscious passenger somewhere safer, at a hospital or someone’s doorstep. It’s not long before Maddy (Sabrina Carpenter) realizes her sister Emma (Maddie Nichols, embodying a superb wasted white girl) has gone missing from the party she’s attending. Maddy quickly forms her own search party with two friends (Madison Thompson and Diego Abraham), using her iPhone to track Emma’s location, and turns the movie into a cat-and-mouse pursuit outside the pale confines of their vaguely liberal college campus.

It’s an important detail in a movie predicated on the pervasive fears of police brutality and racial bias. When Sean makes a pitstop—a busted tail light prompts worry over getting pulled over—white residents peek through curtains and interrogate his stalled presence beside their “Black Lives Matter” yard sign. If these sometimes come off as cheesy juxtaposition, they do underscore a similar tension brewing between two Black friends who interpret their identities, cultures, and futures very differently. “We breathe the wrong way, we get shot,” Sean tells Kunle, a straight-laced, Princeton-bound biology student struggling to grasp his best friend’s anxieties.

Throughout the group’s fits and starts I couldn’t help thinking about Superbad. Though similar in structure, Greg Mottola’s comedy paints its suburban police officers as incompetent buffoons, flexing their badges and bullets and befriending random white teenagers. Emergency offers a reality-based counterpoint. Kunle, Sean and Carlos don’t have the privilege of partying or placating, and Sean, in particular, can’t shake the feeling that their innocent attempt to save a young woman will be fatally mistaken as a kidnapping or assault before anything else. “I ain’t trying to be a fucking hashtag,” he yells, and you can feel the pain attached to his trembling. It’s not something Michael Cera’s character could ever fathom.

Williams does his best to balance these raw conversations and outbursts with jolts of humor (offered mostly by Chacon), leaning on his actors’ chemistry to even out dialogue that can sometimes feel stilted and long-winded. Cyler, who Williams previously collaborated with in R#J, has natural charm and comic timing, even as Sean’s insecurities about the night amplify. It contrasts nicely with Watkins, who must navigate between his whitened academic worldview and the transformative realization his skin color still has practical, everyday implications. Their unintentional road trip certainly provides a greater education than their white professor’s lecture on the N-word earlier in the day.

The movie’s powerful conclusion irons out its characters’ impassioned and occasionally implausible actions, but also puts the night into perspective. Despite highlighting some chaotic encounters, Williams isn’t interested in explosions and one-dimensional, hell-bent villains. His focus remains on the way years of criminalization can impact decision-making and friendships, and, as his last shot suggests, how distinct sounds can traumatize even as they’re meant to help.

Emergency premiered at the 2022 Sundance Film Festival and opens in theaters on May 20 and arrives on Amazon Prime Video on May 27.