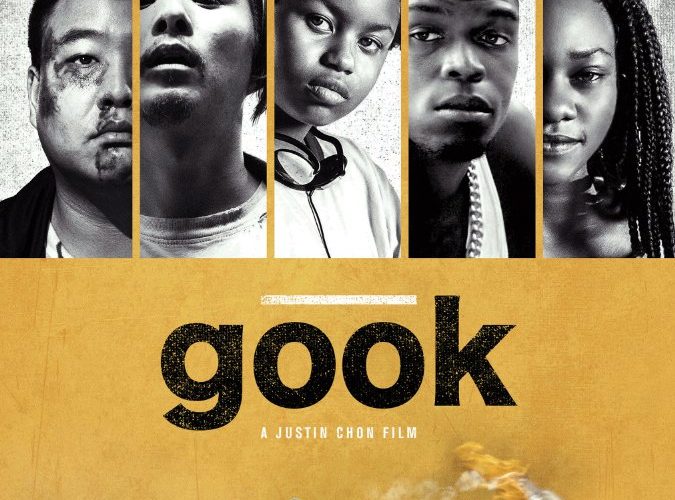 The provocatively-titled Gook, written and directed by Justin Chon, boasts a solid, socially-minded premise: set at the beginning of the L.A. riots in the spring of 1992, two Korean-American brothers own and run a fledging shoe store while maintaining a somewhat-complicated relationship with a young African-American girl. Chon pulls triple duty, also starring as Eli, older brother to Daniel (David So). Eli constantly pushes for the shoe store to survive, a responsibility handed down to him from their father. Daniel could care less, far more concerned with recording his demo and becoming a R&B star.

Kamilla (Simone Baker) skips school to hang with Eli and Daniel and help in the store, something she keeps from her brother Keith (Curtiss Cook, Jr.), who harbors deep resentment for the brothers. Filmed in black-and-white, Chon’s DIY feature recalls the films of Sundance past. From an aesthetic and setting similar to Kevin Smith’s Clerks to a socially-minded tragi-narrative that’s reminiscent of Spike Lee’s Do The Right Thing, Chon has clear influences in mind. At a quick 94-minute running time, everything moves at a steady pace, moving towards a climax that feels a bit too telegraphed at times.

The action takes place in Paramount, California. Once the Rodney King verdict is read, chaos ensues in the neighboring city of Compton. “Free stuff South Central!” is called out by the predominantly African-American population surrounding the shoe store, as looting begins to erupt nearby.

And though Gook is wrapped in this macro-history (televisions and radios play out the verdict in the first act), the narrative stays focused on Eli and his fracturing ties to Daniel and Mr. Kim (Sang Chon), an older Korean storeowner across the street who shares a past with Eli’s family. But the central conflict concerns Eli and his growing paternal feelings for Kamilla. Baker emerges as a dynamic young actress, playing off both Chon and So beautifully. Chon has been a character actor – in both television and film – for some time, and clearly relishes the lead role here. It’s a smart rendering of a young, ambitious American. Frustrated and angry in one second, happy and charming the next, Chon walks the line between nuance and melodrama rather well, up until the last few scenes at least.

In one particularly effective exchange, Kamilla asks Eli what the word ‘gook’ means. He explains that, in Korean, the word means ‘country.’ These two have a sparkling chemistry that pushes the third act through some overwrought plotting and sloppy action editing. That said, warts and all, Gook serves as a perfect example (and reminder) of why the NEXT Section at Sundance is well worth exploring and reviewing and reacting to, perhaps more than any other slate. Chon has a vision and a voice and a good story to tell, full of social relevance and fiery emotion. Something this energetic and cared for is hard to criticize all that much. It’s a film worth seeking out and telling others about.

Gook premiered at the Sundance Film Festival and opens on August 18.