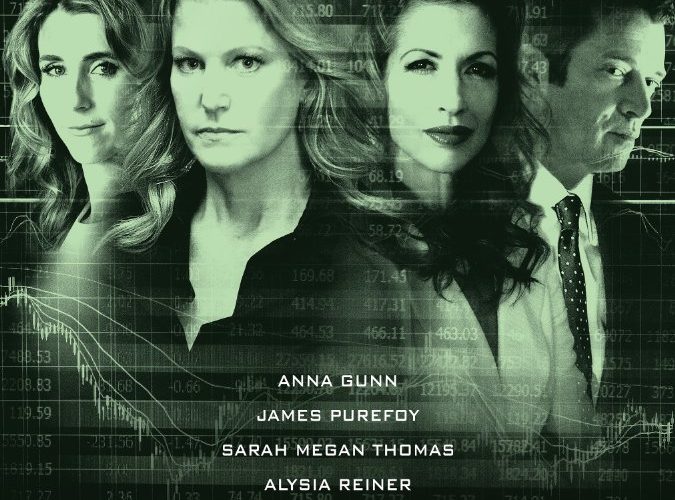 There were many great films about strong women at this year’s Sundance – Kelly Reichardt’s Certain Women and Antonio Campos’ Christine to name two of the festival’s best features in their own right. Meera Menon’s Equity, a female-driven (written, directed, produced) corporate thriller set in the cut-throat workplace of Manhattan high finance, is a solid addition to this camp, although with nothing of the style or verve of either of those pictures.

The film sets itself up as a women-centric Wall Street, as Anna Gunn’s Naomi Bishop emulates Gordon Gekko’s speech to a crowd of female grad students in one of the film’s opening scenes that she works because “she likes money.” Coming from a poor background, money pays for her brother’s education, or jewelry for herself, but she is a banker also about winning the game – although who she’s playing is a matter of contention. Is it men, other women, or is it the system?

Equity is more nuanced, if not as ferociously confidant as that 1987 Oliver Stone film, here focusing on the nitty gritty of a market launch of a social media-style security company. In a post-Snowden leaks and Sony hacks world, the set-up seems entirely plausible, but the thrust of the plot isn’t really what derives the drama.

Indeed, our interest derives from the machinations of women who have surround this IPO (initial public offering, for those at the back) launch. Not just Gunn’s Naomi, but her glamorous assistant Erin (Sarah Megan Thomas), and old school friend Samantha (Alysia Reiner) who now works for the cops on securities fraud; all three bring key women’s voices to a film genre dominated in the past by men. Thomas and Reiner, for their parts, also act as producers.

Gunn carries much of the intensity to her character in Equity that she did to her Emmy-winning performance as Breaking Bad’s Skyler White. Like her, she doesn’t make any grandstanding speeches about women in the industry, instead internalizing her frustrations. She’s a brusque member of the banking sorority, a 40-something without kids whose work is her life. And while in Wall Street’s macho world, that might be attributes, for a woman like Naomi it puts off prospective clients. Her reputation is tarnished, for instance, because of a previously scrapped IPO launch when she was said to “rub clients the wrong way,” a shorthand for male clients perhaps not appreciating such a forceful woman.

Other characters, however, are less successful. I never believed in Reiner’s cop, who suffers from the indignity of making a fraction of the money the people she investigates, yet gets away wearing haute couture clothes while trying to sucker up tip-offs from corrupt bankers in New York bars. And James Purefoy is too obviously slimy as Naomi’s lover-slash-colleague, a creepy unethical sort-of banker who offers tips to hedge fund managers. However, it was appreciated how banker males here were numbskulls and showoffs, while women played the same game by being sophisticated and smart-talking.

Naomi’s intuitions that her product might be flawed prove correct, although it’s not men that bring about her downfall that you might expect from this out-and-out feminist film. Indeed, it sets up that the whole banking set-up is institutionally corrupt, with hardly a sell in it that isn’t influenced by insider knowledge or dodgy dealings.

By not towing an obvious line about gender inequality in the workplace, some might find the film subversive; I must say I found the writer’s reasoning confusing. Maybe I was looking for a reason to believe a female-led picture would draw me to new conclusions. Instead, much of answers centered how banking is still seen as a massively dodgy arm of a country controlled by financial institutions.

But perhaps it’s just important to acknowledge the relatively infrequent women-orientated films like this that find themselves in genres – and in workplaces (both banking and filmmaking) – that are so male-orientated. Indeed Sundance’s commitment to female filmmakers – 41% of competition films are directed by women – puts other festivals to shame. Perhaps that news bite of changing attitudes to gender in the workplace is the real story here.

Equity premiered at the 2016 Sundance Film Festival and opens on July 29.