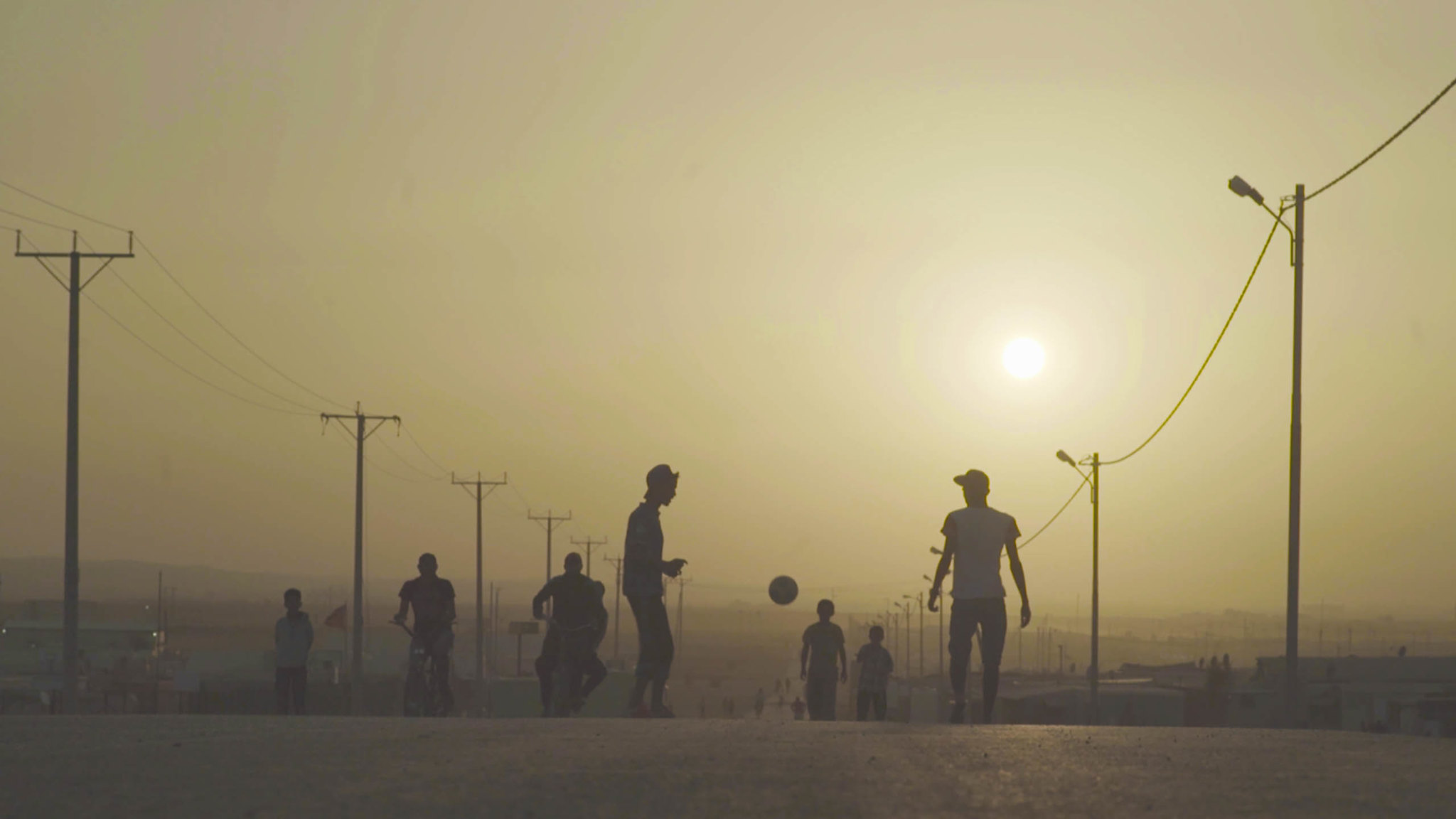 Captains of Zaatari opens on a note of beauty, with exceedingly pretty shots of best friends Mahmoud and Fawzi kicking up dust as they bounce a soccer ball back and forth in the Zaatari refugee camp in northern Jordan.

Displaced with 80,000 other Syrians (more than half of whom are children) to this sprawling makeshift city, both teens dream of escaping the camp and playing professional soccer. A distant goal to Mahmoud and Fawzi, and one viewed as a pipe dream by Fawzi’s patient but put-upon family, this possibility suddenly grows excitingly close when a Qatari sports academy scouts the camp and recruits Mahmoud for training. Due to what the documentary presents as an age-related technicality, Fawzi is left behind, though coaches shortly thereafter allow him to join. From there, Captains of Zaatari shifts from a more interesting, slice-of-life look at the Za’atari refugee camp and its communities into an overtly inspirational sports doc, both boys chasing their dreams even as Fawzi struggles with trouble back home and Mahmoud finds himself distracted by young romance.

Making his feature directorial debut, journalist Ali El Arabi approaches Fawzi and Mahmoud’s experiences as a character-driven underdog narrative, illuminating the many obstacles between these two and their field of dreams. As a piece of filmmaking, Captains of Zaatari is undeniably rousing feel-good entertainment, and it’s edited like a dramatic feature. Comparisons to Steve James’ influential Hoop Dreams seem inevitable, despite existing primarily on the surface and frankly doing the film few favors. El Arabi’s 73-minute runtime––surprisingly though not uninvitingly trim, given that he constructed Captains of Zaatari out of 700 hours of film, shot over six years––never lets it run as deep as James’ influential doc, which used basketball as a doorway through which to access much deeper ideas about race, class, addiction, and the American inner-city family. Captains of Zaatari focuses on the high stakes of Mahmoud and Fawzi’s mission; this rare opportunity to rise above their circumstances is perhaps the only one that will come their way. But making your only shot count is par for the course as far as sports docs go, and cinematographer Mahmoud Bashir bathes everything in a soft, golden light that sands down the edges of their reality.

El Arabi also makes the arguably crucial mistake of over-dramatizing this material, leaning on melodramatic scoring and a cinematic visual style that’s striking enough as to distract from the worthy human story he’s telling. It doesn’t help that El Arabi’s comfort with his two young subjects clearly cuts both ways; during filming, El Arabi bonded with his subjects by allowing them to take his camera and film the crew, then taking the camera back and getting his footage. With El Arabi filming Mahmoud and Fawzi from age 16 to 24, it’s understandable such tactics would lead his subjects to feel a real sense of co-ownership in telling their story. But El Arabi has inadvertently brought them around to sharing his film’s goal of turning that story into a heartstring-tugging crowd pleaser, leading to moments that feel coached or camera-conscious.

“I can’t believe we’re here from a refugee camp, and now we’re shaking hands with the heads of the football league,” Mahmoud says at one point. “We’ve become important.” Captains of Zaatari tends to vocalize its ideas like that, which has the unfortunate side effect of making these boys feel more like characters than subjects, while also introducing the tough-to-answer question of whether some of the more artificial-feeling interactions were staged, intentionally or not, for our enjoyment. “All a refugee needs is an opportunity, not your pity,” Mahmoud says during a press conference later, a declaration of deserved and hard-won triumph for the boys. There’s truth in this statement, and undeniable joy in seeing dreams realized, but El Arabi hits his points home with a certain kind of Hollywood-primed precocity that sugarcoats more complex realities.