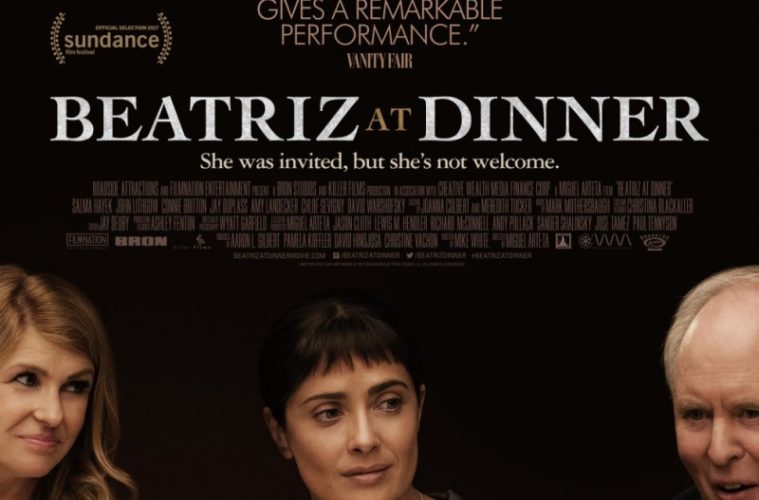 If you could sit face-to-face with Donald Trump, what would you say? Beatriz at Dinner doesn’t imagine exactly that, but the scenario it presents is undeniably analogous, even if the character crafted in POTUS’ likeness is far less insecure and destructive to humanity. Presenting a clash of socio-economic classes and the ensuing discourse of morals and politics, the latest dramedy from Miguel Arteta is an observant, but not entirely successful outcry for the agency of the under-represented.

Beatriz (Salma Hayek), an animal lover whose roommates include dogs and goats, makes her modest living through the holistic treatment of massage and physical therapy. One of her clients, Cathy (Connie Britton), lives in the kind of luxurious Los Angeles mansion that has three entrances to make it to the main driveway. After treating her one afternoon, her car won’t start, so she calls a friend to pick her up, but he can’t be there for a few more hours. So, with a bond over treating Cathy’s daughter after she went through chemotherapy, she invites Beatriz to stay the evening. It won’t be a quiet evening, however, as they’ll be having a dinner for her husband Grant’s (David Warshofsky) work colleagues to celebrate a recent land development deal.

As they arrive, Beatriz subtly gets pushed into a corner (or entirely forgotten) both physically and conversationally. “I love Mexico. Cancun is awesome,” Jay Duplass‘ Alex mindlessly says, responding to a question about her native country while the wives have a faint demeaning tone when discussing Beatriz’s relationship to the family and become obsessed with a disgusting TMZ-esque leaked video. The most egregious of the social offenders is Doug Strutt (John Lithgow), who Beatriz soon finds out is a head honcho billionaire and believes she may have a past with his ego-centric path of gain by any means possible.

Scripted by past Arteta collaborator Mike White, it’s not so much a comedy of manners, but a drama of classism with seemingly polite degradation turning into something more menacing. Hayek weathers it all in one of her better performances in some time, providing a genuine horror and fury as Strutt’s various atrocities come to light. As this mogul, Lithgow is perfectly smarmy, yet unlike Trump, he’s not just saying things he doesn’t believe deep down in order to get a rise from people or shut up an adversary to avoid the question. He’s a product of big-firm capitalism, perhaps the pre-eminent example of exploiting the system, and the ideal foe for Beatriz as he has a plausible answer, however horrifying, for all of her inquiries.

Running 83 minutes, Beatriz at Dinner feels like it says all it has to say too quickly. An expanded playing arena might have offered room to fill out these characters with more detail, particularly the houseguests, who are set up for an all-too-easy kill. Early on, when Beatriz has a moment of righteous victory, the theater erupted in applause. If White had laid the pieces more intricately and we weren’t on Beatriz’s side from the very first second, one can imagine how much more a complex drama this could be.

What’s here though is more nuanced than another director-writer duo made have attempted — and we will surely get more of the ilk over the next presidential term and beyond — as the guests (also including Chloë Sevigny and Amy Landecker) play things with an oblivious entitlement that feels grounded in their secluded elitism. A spiritual finale that offers both pessimism for our world’s current situation and potential optimism for our lead doesn’t exactly work, but as a film capturing increasing condescension until a breaking point is reached, Beatriz at Dinner impresses with an impassioned performance by Hayek.

Beatriz at Dinner premiered at the Sundance Film Festival and opens on June 9.