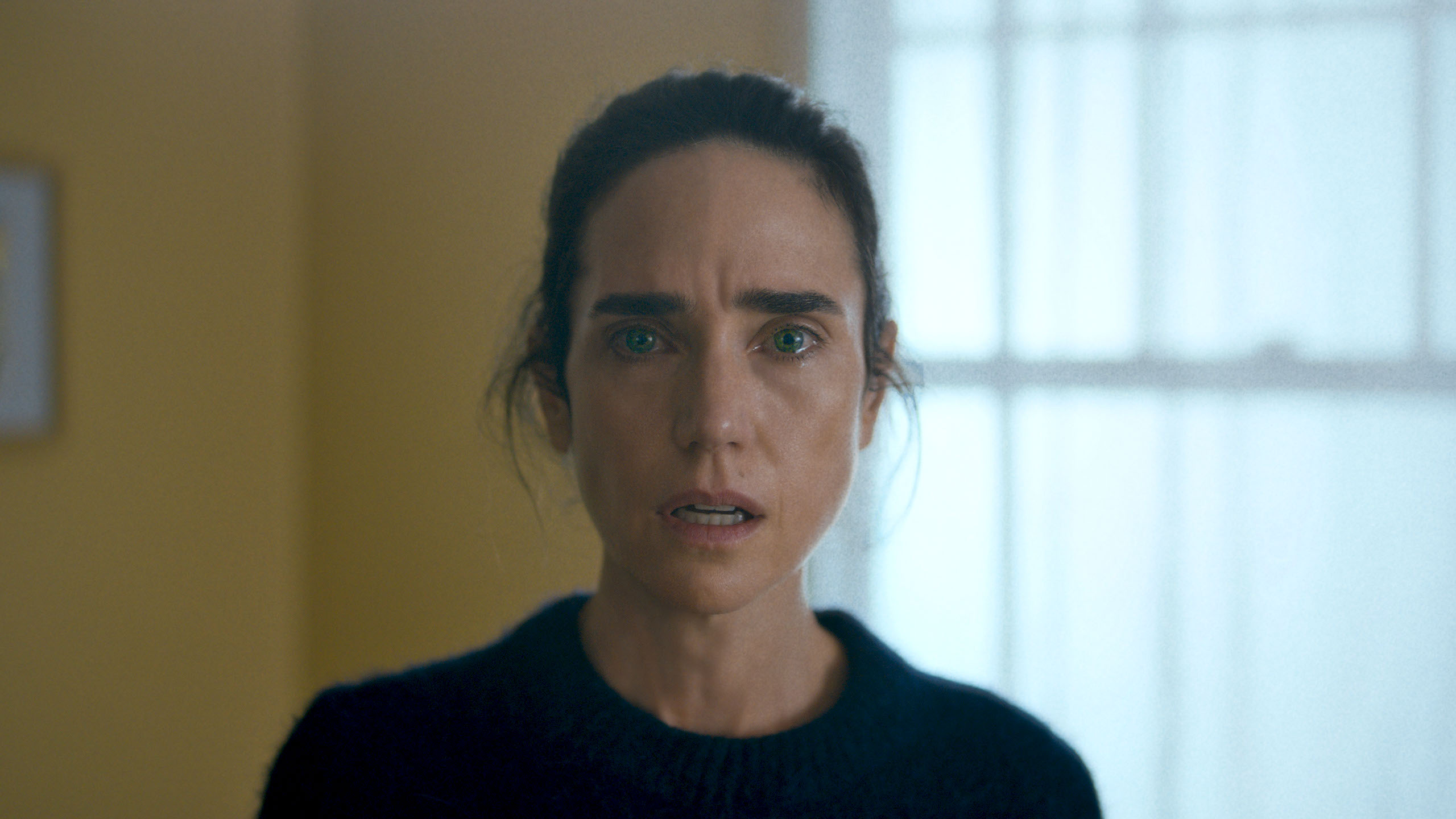 Bad Behaviour cannot pick a tone. Over the 107 minutes of Alice Englert’s debut feature, the only consistency comes from constant shifting. Following Lucy (Jennifer Connelly), a former child actor attending an enlightenment retreat, and her daughter, Dylan (Englert), the dark comedy switches between these two stories until they converge in the third act. Neither plotline has enough substance, though, acting like a series of half-baked ideas about wellness, parenthood, and happiness.

Connelly and Englert are joined by Ben Whishaw as a guru named Elon (yes, it’s all a bit on the nose) and Dasha Nekrasova as Lucy, a model also attending the retreat. All of these actors seem committed to the wildness of the ride that Englert has penned, but none besides Connelly make a dent in this material. They come and go without much fuss. Whishaw especially falters as this guru, coming off as unnecessary and campy, his impression of an enlightened soul more grating than funny. Maybe that’s the point, but it makes for difficult viewing.

Connelly attempts to hold the film together. She’s stellar as a mother out of control, a woman under the influence of outside factors and driven to extreme measures because of flickering lights, weird dreams, passive-aggressive attendees, and a disintegrating relationship with her daughter. She provides both the comical and emotional core of the film, placing a heavy burden on her shoulders, one even she can’t shoulder to Bad Behavior’s completion. Englert is a worthy foil as Dylan, a stuntwoman missing direction and companionship. She brings doses of levity and reality, both distracting from the central plot and returning the viewer to the world of the living.

The retreat, on which conflict and ensuing action hinge, often seems nonsensical. Englert even throws in an animated dream sequence, further pushing its lack of identity. These moments can work when used amongst a more cohesive story, but seem out of place here. It’s a film guilty of over-satirizing a beaten-down idea, wryly funny in concept but only momentarily amusing in execution. The script acts on the element of surprise, a darkness that’s hidden within Lucy and a darkness that’s, sadly, coming for Dylan. When pandemonium ensues, the shock’s thin, wearing off sans any sort of ceremony. The excitement lasts for a moment, and then in a flash, it’s gone; the audience is left waiting for an emotional crescendo that never comes, a half-serious message of understanding that falls flat.

Though Bad Behaviour has moments of pure comedy and loads of ideation. Englert seems to be overflowing with thoughts on the way humans search for and end up finding happiness, enlightenment, or whatever else one might call it. She wants to skewer these wellness retreats, men in Hollywood, and the general facade of fame, and finds minor success. In the final act, regardless of any emotional connection (or lack thereof) Connelly and Englert have tremendous chemistry as mother and daughter. They play off one another with ease, their shared comedic timing stronger than expected.

Englert’s first feature isn’t low on creativity, but visibly lacks cohesion. It’s difficult to connect to, disparate in its own storytelling, mood, and tone. It’s an audacious script and directorial vision, falling short. Outside of a hilarious Connelly using her star power and experience to create a memorable lead character, Bad Behaviour is transitory, destined to not be remembered beyond a few quippy quotes.