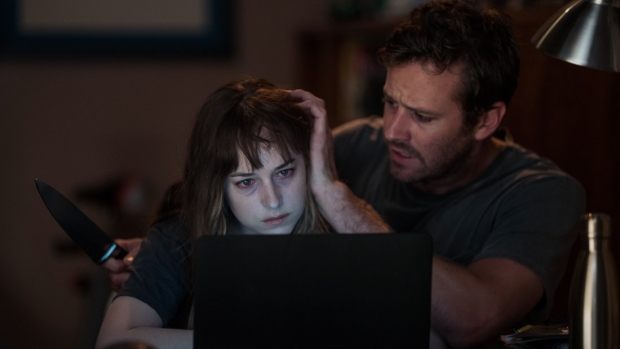 If one wants to watch a sweaty, disturbed Armie Hammer wander around New Orleans as he’s haunted by a malevolent spiritual force, Wounds satisfies on those pleasurable, if undemanding expectations with its engrossing build-up. However, for those hoping that Babak Anvari’s follow-up to Under the Shadow would contain a little more substance in its frights–especially as the third act nuttiness ramps up–prepare for disappointment.

An easy-going bartender at the establishment Rosie’s, Will (Hammer) seems to be enjoying his relatively simple existence. He has a beautiful, adoring girlfriend named Carrie (Dakota Johnson), friends to catch up with, time before his night shift to play Call of Duty, and a seemingly unlimited supply of drinks. Anvari’s adaptation of Nathan Ballingrud’s novella The Visible Filth is rather clever as it begins to knock down the flimsy surfaces of this life. Will is actually an alcoholic, his relationship with Carrie is strained, and he’s in love with one of his local patrons (a severely under-utilized Zazie Beetz), who is keen on keeping up the relationship with her boyfriend. All of these inadequacies begin to reach a breaking point once a mysterious group of under-age kids leave one of their cell phones at the bar.

Will takes it home and, in his self-satisfied bid at outsmarting millennials, he finds out how to unlock it by looking at the smudge marks of the password. He’ll soon regret the decision as he uncovers horrifying images and videos that hint at grisly murders, the source of which not only will torment him, but those closest to him as well. Anvari most excels at conveying this tone of dread with ominous tones protruding from the soundscape in unexpected moments and handheld cinematography that seems perpetually fixed onto Will’s frenzied state. While this atmosphere-setting works, it’s undercut by fairly cheap jump scares, in which full-frame blips of disturbing footage pop out, feeling less organic and more like the easiest route possible to engender terror on the part of the audience.

Watching two of Luca Guadagnino’s stand-out collaborators succumb to both emotional and physical horror has its charms, with Hammer and Johnson’s sexuality going a long way to satiate their affectation-turned-alienation. As body horror elements come into play, they also share a physicality that few other actors could sell this well. If Hammer and Johnson are the main stars, then it is the cockroaches that lead up the supporting cast. Scattered about the bar and their apartment, they start to multiply in force as the curse put on Will further pervades.

Wounds also has its moments of humor that make the ride an entertaining one, notably Will sincerely wanting to crash at the apartment for a few days that looks like something straight out of the gluttony crime scene of Se7en. It’s when the pieces of the puzzle all start to click in place (or don’t) that the letdown begins to kick in. Anvari touches on everything from technology obsession to infidelity to addiction to spiritual transcendence, but none of these themes feel fully explored, rather signifiers hinting at a more effective psychological thriller hiding under the surface. When he quite literally throws everything at the wall in the final moments, it’s an ending that feels from a more gonzo film then the mood piece we were given. In that sense of enveloping atmosphere, Anvari’s approach is superb. When we’re meant to look below this well-assembled facade, Wounds doesn’t cut deep enough.

Wounds premiered at the Sundance Film Festival and opens on March 29.