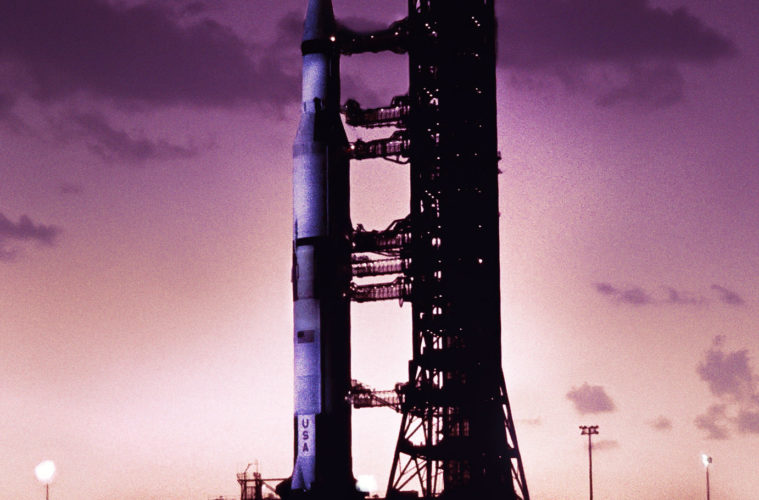 Sundance Review: ‘Apollo 11’ is a Time Capsule of Astounding Footage

On July 16, 1969, Neil Armstrong, Michael Collins, and Buzz Aldrin embarked on a historic lunar odyssey, successfully landing on the moon and then returning to Earth. Free of talking heads, reenactments, and newly-recorded narration, the new documentary Apollo 11 takes viewers on this nine-day journey, constructed from astounding, never-before-seen 65mm Panavision, 35mm, and 16mm footage, as well as audio culled from over 18,000 hours of tapes. A perhaps initially unintended result when NASA handed over this remarkably pristine footage to director Todd Douglas Miller, his documentary is also a fascinating time capsule of this specific era.

The opening shots tease the incredible scale of massive infrastructure in place to pull off this launch. With the camera on the ground, we witness NASA workers next to the wheels of the towering transport vehicle designed to move the aircraft, and George Lucas’ inspiration for the Sandcrawler is clear as day. As the countdown for the launch begins, we’re provided a look at each aspect of this monumental undertaking, including placing us directly in the Mission Control Center in Houston, Texas, which no fiction film has truly shown the precise scope of its setup. In one seemingly makeshift dolly shot, we wheel past each row of workers, many knowingly giving a glance to the camera. With each new shot, the human element of this journey into space becomes more and more apparent as we fathom just how many person-hours were clocked.

In mentioning Hollywood’s depiction of these events, the film also works as a captivating reference point in comparing it to the dramatized depictions, most recently First Man. While Damien Chazelle’s film was more keyed into Armstrong’s family life–shown in Apollo 11 in a blip, with a few brief photographs and a few on-camera cameos later in the film–this documentary is a testament to how much the filmmaker got right. Yes, there is ample footage of the American flag throughout (as there was in the Ryan Gosling-led film), but what’s most impressive is how Chazelle keyed in on the technical hurdle of pulling off something like this with the millions of parts and advancements in electronic components, much of which is seen in microscopic detail here. There’s also the moon landing itself, which is on display in all of its immaculate splendor here, even if much of the best footage is from the one-frame-per-second cameras.

What Chazelle or the filmmakers before him could never recreate is the I-can’t-believe-I’m-in-the-room-with-them feeling when we first get face-to-face with the trio of astronauts and the clarity in which they are captured. The camera gets remarkably close to Aldrin, Armstrong, and Collins as they are putting on their gear and we see the inspiring determination in their eyes. As we get further into the mission, the humor ratchets up along with the intensity. Heartbeat readings are given off, the results of which will cause a few laughs as will jokes about accidentally locking themselves out of their spacecraft when on the moon. As we hear the actual recordings of the astronauts communicating with the designated capsule communicator (aka CAPCOM), it gives Apollo 11 an underlying, powerful thread of humanity.

With over a million spectators in view of Kennedy Space Center in Merritt Island, Florida, Apollo 11 is also a fascinating time capsule of 1969. Not only were the cameras close to the main operation, but crews ventured out to the beaches, motels, and department store parking lots to get a glimpse of the Americans awaiting this historic launch. In all their colorful glory, we see the flipped bob cuts, floral dresses, oversized sunglasses, vintage coke cans, and even the multitudes of camera equipment there to capture it all. Coupled with news of Vietnam and the Chappaquiddick incident competing for airtime during this trip to the moon, this is as transportive as documentaries come.

Even though Apollo 11 will be sold as a direct cinema experience, there are some added elements that detract. The score by Matt Morton, who used a Moog modular synthesizer, gives the proceedings an electronic, otherworldly feel, even if it can feel overblown at times. There’s so much raw visual power in these images that they can stand by themselves. One doesn’t need Hans Zimmer-esque blockbuster bombast during some of the sequences, yet it is often employed to give more unnecessary gravitas. Miller also adds many on-screen data points, countdowns, and instructional how-to diagrams of their mission. While these elements help pinpoint the feats the crew needs to pull off, one hopes there’s a version down the line with the option to remove them as the total immersion in the footage gets muddled when these elements come into play.

“Oh, mother country, I do love you.” As John Stewart’s song plays diegetic on Aldrin’s mixtape, it’s then used as an ode to not only the American spirit, but a symbol of the global achievement of the moon landing. Fifty years later, it seems difficult to imagine our country becoming as unified over a single event again, and Miller’s political statement is never more clear when the hopeful words of JFK ring out in the film’s closing moments. With a current president who seeks to divide and denigrate, Apollo 11 is a much-needed testament to innovation through shared inspiration.