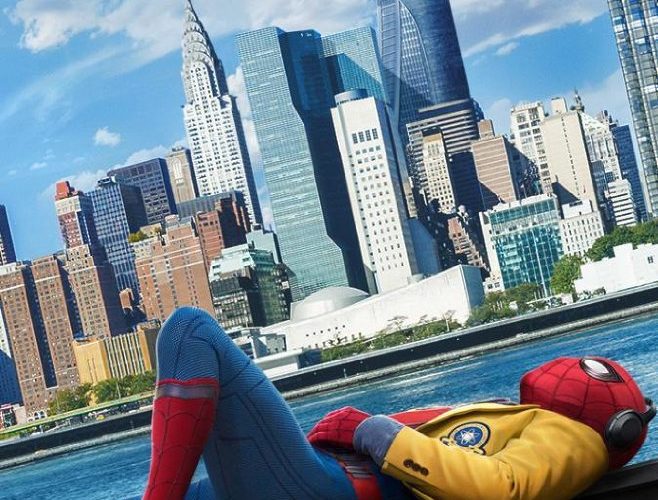 Despite the fundamental truth that art is, at the most elemental level, unnecessary to survival, its unequivocal power to reward the soul and imagination proves undeniable across every culture and time period. This conviction was recently put to the ultimate test when it comes to the third launch of a Spider-Man in this infantile century, and particularly under the circumstances: crammed into a roster-heavy franchise threequel in a cinematic universe that, at the time, already spanned 13 films. While the neighborhood’s friendliest superhero was merely a blip in Captain America: Civil War, Tom Holland is now getting a proper introduction with his own feature, and, against all odds, it just about works. Despite succumbing to the seemingly inescapable monotony that pervades most final setpieces in this genre, the film exudes a charismatic quality of nimble fun with its playful direction and lighthearted lead performance.

Despite what the Robert Downey Jr.-heavy marketing may have you believe, precisely what makes Spider-Man: Homecoming work as well as it does is our lead’s lack of relationship with The Avengers. While the world-famous superheroes get the spotlight as they battle the big baddies, continue their monotonous in-fighting, and endure the tedious search for Infinity Stones (or something), Peter Parker is stuck in Queens. He just had the experience of his lifetime seeing what this larger arena is like, but he must now wait for a call from his new, unenthused guardian Happy Hogan (Jon Favreau) — aside from dire situations, Tony Stark doesn’t quite have time for him. In the interim, he spends his days waiting for school to get out, then proceeds to his “internship at Stark Industries,” which involves slapping on his suit and going out into the neighborhood to stop crime. Unfortunately, this noble goal is far less exciting than it sounds — but is captured humorously — as the most menacing threats include bike thieves and misunderstood carjackings.

Cop Car’s Jon Watts, the latest in the ever-increasing line of Sundance-bred indie directors stepping up to the tentpole plate, brings a playfulness to Holland’s world that effectively mirrors the character’s own youthful point-of-view. Whereas past Marvel movies attempted to rely on humor mostly on a script level — and, on the whole, stumbled immensely — Watts exudes a sense of visual rhythm and comedy that keep things lively. Cleverly edited sequences involving the time passing at school and Spider-Man causing neighborly headaches, rather than the desired heroism he pines for, help retain an engaging pace, as does an amusing twist on the usual TV-anchor background-noise trope.

Unfortunately this doesn’t quite extend to action sequences that still feel pre-programmed years in advance and executed by Kevin Feige with the touch of a few buttons. As the blue-collar worker-turned-villain, Michael Keaton is unluckily involved with much of them, even if he does bring a level of depth to certain sections best left unspoiled. Most disappointing is the drab finale which, after a thrilling turn of events featuring small-scale tension, brings the film to a halt. Watts and company were smart enough to throw out the origin-story aspects; perhaps next time they can also provide the same courtesy to a needlessly bland CGI-heavy climax.

As for what works: much of the credit goes to Holland, who plays Parker with a good-humored charm and genuine sense of wanting to make the world a better place, even if he isn’t yet quite mature enough. Holland displays both a zippy eagerness and limber physicality that emanates whether the suit is off or on. Homecoming‘s dramatic conflict is a relatively light one for centering on his internal battle between needing to transform into Spider-Man to feel like he’s at his best but, during most of the day, being a self-proclaimed loser. After all, his only real friend is Ned (Jacob Batalon), whose idea of a night out is building a LEGO Death Star set — a joke that comes with a tinge of despair, as Disney wasted no time after acquiring the rights to this character to market other arms of their far-reaching conglomeration.

Other classmates make less of an impression, but are strong casting if you’re playing a Who’s Who game of up-and-comers, including Abraham Attah (Beasts of No Nation), Tony Revolori (The Grand Budapest Hotel), Angourie Rice (The Nice Guys), and Michael Barbieri (Little Men). When Peter and Ned (quickly let in on his friend’s secret identity) aren’t bantering back-and-forth about the fact that one of them may be an Avenger, the two oogle Liz (Laura Harrier), who never quite overcomes the object-of-affection stereotype. Marisa Tomei is also underutilized, given little more to do than be in on the joke of being an attractive Aunt May. Zendaya’s Michelle, in her brief screentime, has a better batting average as she plays a hilariously disinterested member of the group. A special mention should be given to apathetic teachers played by Martin Starr and Hannibal Buress, who carry through with their respective, specific brands of comedy to much delight.

In a genre where it’s become fashionable to say, “It’s less of a superhero film and more of a western, heist movie, 70s-esque political thriller, fill in the blank,” Spider-Man: Homecoming succeeds because it embraces the delight that a standard comic-book movie can achieve by staying simple, going back to the basics, and bringing along welcome energy. The world-ending doom that drags down so many others in the genre is absent, and the present stakes are more personal to Peter Parker, whether it be what most 15-year-olds are going through or danger that surrounds those closest to him. It’s credited as being scripted by Watts, Jonathan Goldstein, John Francis Daley, Christopher Ford, Chris McKenna, and Erik Sommers, and even if 60 fingers were used to pen the screenplay, a few them did sneak in moments of subversity for a four-quadrant tentpole. Lines about how protesting is patriotic and how some of the country’s most notable man-made creations were forged by slaves may catch one off-guard — as could a bit of vulgarity.

While many will trip over themselves to declare in futility that “Spider-Man: Homecoming is the best Spider-Man since Spider-Man 2,” this third iteration of the superhero is still missing the emotion and all-around spark that Sam Raimi brought. (Yes, even that one.) However, as what’s, on paper, among the most inessential blockbusters of the year, Spider-Man: Homecoming proves that going back to square one and adding good-hearted altruism can go a long way.