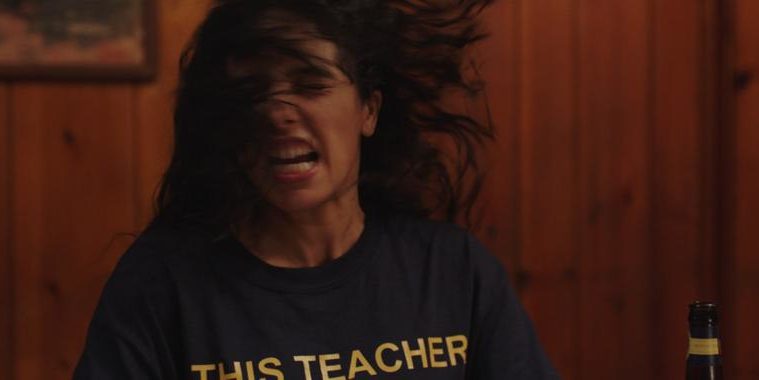 Slamdance Review: ‘This Teacher’ is an Intriguing, Reductive Tale of a Vacation Gone Bad

For most of its runtime, This Teacher plays things close to the chest. In its tale of a vacation gone bad, director/co-writer Mark Jackson flirts with different ideas and themes, only to switch up the plot the moment the film feels like it’s about to settle into place. It’s a good tactic in making This Teacher maintain a sense of intrigue, but once Jackson shows his hand in the final act, he exposes himself as a filmmaker better suited to build-up than following things through. After taking the shape of several different genres and styles, Jackson and co-writer Dana Thompson’s screenplay ends up becoming a reductive political statement, one that’s proud to declare itself a “post-Trump” film in its look at ignorance and hatred.

Not that there’s anything wrong with being political or direct, but execution matters, and This Teacher’s execution feels like watching it combine all of its potential into a blunt object and then beat itself bloody with it. It starts with Hafsia (Hafsia Herzi), a French Muslim woman from Paris visiting New York City for a vacation. She stays with her childhood friend Zarah (Sarah Kazemy), an aspiring actress with a rich husband who now prefers to be called “Sarah.” Hafsia, who’s going through a quarter-life crisis, appears unsure of who she wants to be, while Zarah has all but shed her past identity, and the clash between the two personalities makes their reunion curdle within days.

Jackson throws a few moments in the first act that raise suspicion, like when a man talks to her at a party and asks why she doesn’t wear a headscarf, or when Hafisa finds an Islamophobic flyer at her feet when taking the subway. Herzi, who Jackson and Thompson specifically wrote the role for, gives a nuanced performance that emphasizes her lack of confidence and assurance, making it easy to understand her alienation and hostility to her unfriendly surroundings. The fact that she conveys all of this on her own makes the forced moments of racism feel out of place, and more akin to spoon feeding viewers the point rather than letting them draw their own conclusions.

Just as the political commentary threatens to overtake the film, Hafsia books a cabin in the woods and decides to spend the rest of her trip alone, where the isolation only makes her paranoia run rampant. The change of pace is welcome, since it shifts the focus from the hostile forces around Hafia to how those forces influence her perception. There’s some relief in the thought that This Teacher will become a different film than the one it started out as, one more focused on its lead character’s struggles than reducing her to a receptacle for hatred so the director can make a point.

Unfortunately, Jackson introduces an American couple in the final third that stay in the cabin next to Hafsia’s that come across as cartoonish in their behavior. They welcome Hafsia while acting loud, boorish, and demean her constantly, before they lose their minds once they discover their neighbor is a Muslim, stammering their words the same way as someone on Scooby-Doo when they see a ghost.

Jackson’s decision to double down on the cringe-inducing political statements from the opening act only exposes a narrow-minded view that does his film more harm than good. Herzi’s performance does a lot of heavy lifting in making her character seem like a real person, but the writing and direction want to box the role into a victim designed to piss viewers off at the treatment she receives from ignorant Americans (it’s telling that all we know about Hafsia outside of her being French and Muslim is that she works at a bakery in Paris). This is a film with no interest in confronting the more complicated questions about the political and societal themes it touches on, preferring to dwell in its own blinkered views instead. Ultimately, This Teacher is more of a disappointing film than a bad one, due to Herzi’s strong performance and the potential Jackson shows throughout. It may fail at what it sets out to do, but there’s something to admire in how hard it tries to succeed.