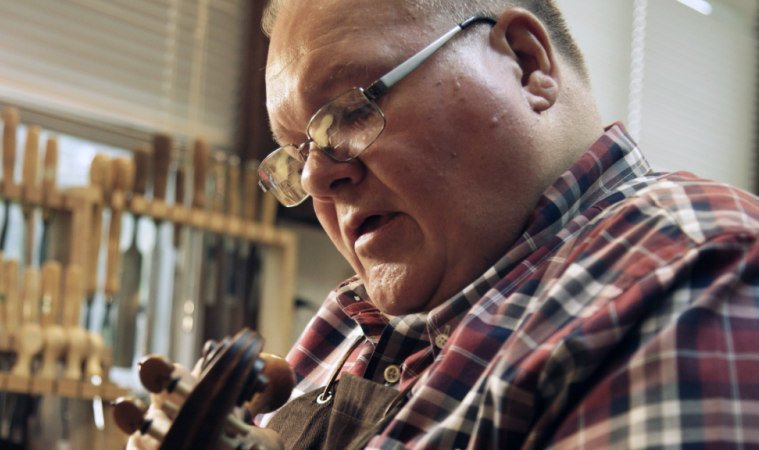 Social media can lead to strange things, as evidenced in Stefan Avalos’ documentary Strad Style. Avalos profiles Danny Houck, a 32-year-old living in small-town Ohio at an old, rotting farmhouse, where the stairs literally crumble beneath his feet. He’s unemployed, behind on his bills, and unable to find work, but finds an outlet to take up all of his free time: violins. He’s fascinated with the work of Stradivari and Guarneri, considered to be the greatest violin makers of all-time (their instruments have sold for millions at auctions), and wants to make his own violins despite having no experience. Houck also spends his time online, and it’s through YouTube that he discovers Razvan Stoica, who’s seen as one of the best violinists working today.

Stoica, who uses social media regularly, started talking to Houck after noticing a comment he made on his Facebook page, and their communication leads to Houck making a bold promise: he will build an exact replica of Guarneri’s violin ‘Il Cannone’ for Stoica, even though he doesn’t really know how to properly build a violin from scratch. That’s where Strad Style begins, with Avalos following Houck over several months as he tries to deliver on his promise, fighting off his own limitations along with making sure the heat and electricity don’t get cut off.

Beside Houck himself, the most fascinating thing about Strad Style is how it demystifies the creative process. A series of title cards in the opening minutes explain how Stradivari and Guarneri are the gold standard of violins, and no matter how much people try to imitate, it’s impossible to know what exactly makes these specific instruments better than the rest. Houck doesn’t bother himself with the importance of the work he’s trying to copy; he just wants to get his project finished and make sure it doesn’t fail. That means doing whatever he can with his financial limitations, and Avalos focuses on the small, unglamorous steps taken to achieve an accurate replica. There’s something funny about comparing the romanticism and mystery surrounding Guarneri’s construction of his violin with Houck using a space heater and tinfoil lining a plastic tub from Wal-Mart to build his.

Houck’s near-delusional commitment to following through on his promise makes it easy to admire his dedication, and by the time he boards a plane to bring the final product to Stoica in Amsterdam it’s hard not to root for him to succeed. That’s largely due to Avalos, who doesn’t cast a judgmental eye at his subject. At first glance, there are plenty of things that can paint Houck as an eccentric who can easily be laughed off, whether it’s his need to wear a bandana at all times, his practicing of magick, or his very Grey Gardens­-esque living conditions. Avalos doesn’t go for easy laughs here, nor does he make fun of Houck’s even stranger relatives who pop in and out of the film from time to time. Instead, he shows Houck as someone with a very specific passion and no real outlet for it. With the help of Stoica and Facebook, Houck finds a way to show off his potential, and Avalos is lucky enough to step back and let the remarkable story speak for itself.