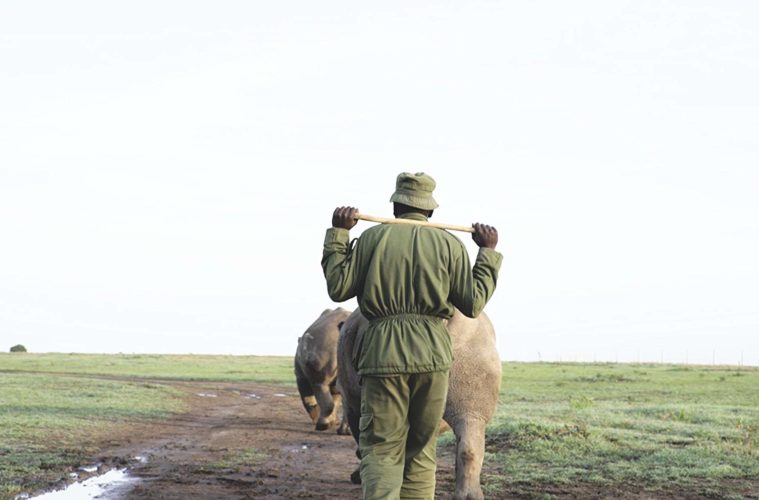 Slamdance Review: ‘Kifaru’ Takes a Familiar Look at Near-Extinction in a Kenyan Conservancy

In Kifaru, several workers at a conservancy in Kenya wonder how they can find hope within a hopeless situation. Their job is to take care of Sudan, a 45-year-old northern white rhino who is the last remaining male of his kind. Already in his final years, Sudan’s death looms over his caretakers, who can only do their best to make him comfortable while fending off poachers. Director/cinematographer David Hambridge focuses on two new workers at the conservancy, following them on and off for several years, and while his subjects find themselves confronting existential questions through their work, Hambridge doesn’t have much interest in tackling the same issues.

Not that Hambridge doesn’t make an effort (it is his debut feature, after all), but his concerns stay on aesthetics more than anything else. Filmed mostly on the 90,000-acre Ol Pejeta Conservancy, Kifaru takes full advantage of the landscape, shooting in anamorphic widescreen and using drones to capture the area in all of its glory, the camera gliding along most of the time. This makes Kifaru pleasing to the eye, but its slick visuals wind up making the film feel too slippery. Presentation dominates here, drowning out any emotional resonance from the situation and keeping everything at a distance.

The first of the new caretakers we meet is James, whose mind seems preoccupied with the concept of extinction, and how much of it comes as a result of human greed. Working alongside him is JoJo, the youngest worker with the rhinos who grows too emotionally attached to the animals. Early on, JoJo takes care of an orphaned baby rhinoceros found on the conservancy, but his more experienced coworkers know that the animal won’t survive on its own at such a young age. Hambridge follows both men as they go back home to see their families (they work ten months out of the year on site, meaning they only see their loved ones for two months every year), but even as we get to know them better, the footage feels perfunctory. The film’s structure feels like it’s formed out of what one expects from convention, rather than building from what’s captured on camera.

And it’s the familiar shape of Kifaru that ends up hurting it. This feels less like a film and more like something packaged, designed in a way to hit broad, emotional beats to maximize its appeal. Granted, there’s nothing inherently wrong with leaning into audience expectation, but the conventions themselves don’t make a good documentary. It’s not enough to just assume the shape of something else, because all it does is expose the shallow intent of its creator.

These problems become more noticeable in the latter half, where Sudan starts nearing the end of his life, and suddenly James and JoJo disappear from the film so the focus can shift to a scientist rushing DNA samples to a lab to preserve the genetic make-up of the species. Or when, in the closing minutes, James starts making public appearances about saving animals from extinction, and the film morphs into a piece of activism (presumably so it can set up a nice title card before the end credits). There is a great tragedy at the center of Kifaru with the loss of Sudan, and the sight of an entire species inching one step closer to oblivion certainly registers as a disastrous consequence of human selfishness. But if we want to prevent another tragedy like it from occurring, we can do better than adapting it to a lazy, digestible format that only generates apathy.