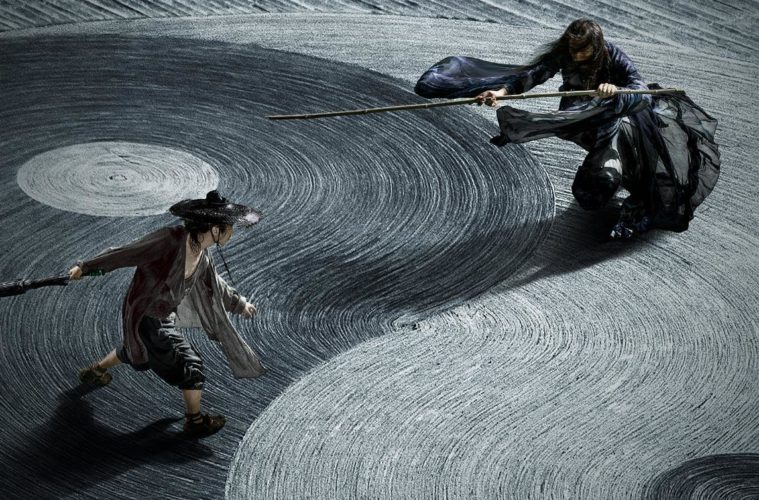 It could be said the Chinese historical drama is marked before Zhang Yimou and after Zhang Yimou. Transporting foreign audiences to his country’s long, often violent history in the most lush of compositions and stunning of action sequences–that is to say, sequences built on action as a concept of movement, shifting light, rustling fabric–and the tradition continues with Shadow, which premiered last year to largely awed reviews. Key is his collaboration with cinematographer Zhao Xiaoding, with whom Zhang has worked since 2002’s monumental Hero.

I had the fortune to interview Zhao at this year’s EnergaCAMERIMAGE, during our time gathering information on their philosophies of action filmmaking, quality control in an increasingly poor climate, and, of course, Shadow‘s wealth of silver.

Thanks to Shadow producer Ellen Eliasoph, who provided on-site translation.

The Film Stage: Do you and Zhang work with a certain philosophy, a set of principles, when shooting action sequences?

Zhao Xiaoding: A cardinal rule for Zhang as a director is to never repeat himself. For each movie, we sit together and think about the story and types of action possibilities that story gives—different types of fights—and we work with the action director to develop the specific style of action for each movie. For Shadow, the style of action was reflecting the principle of the soft-conquers-hard—yin-conquers-yang, water is more powerful than fire—and that’s why the movements are sort of feminine. As opposed to the guy they’re trying to kill, who’s using a big sword and has a hard, masculine style of fighting. But that was required by the story, so it’s pretty much the same for every movie, that we try to do something different for each one.

Most contemporary action sequences, no matter their national origin, are quite bad. As this happens while you maintain a fantastic collaboration with Zhang, do you see your work as the maintaining of a tradition, even a pushing-against bad tendencies.

We’re not trying to “make a point.” It’s just that the way we conceive action, from both a directing and cinematography point of view, and with the action directors we work with—who are some of Hong Kong’s greatest action directors; the one who worked on Shadow trained under Yuen Woo-ping—are classic action. The principle we have is very simple, but it elevates everything: as long as the actor can perform the action, do not cut in other scenes from body doubles or anything like that; don’t try to chop it all up and put it together. Let the actor complete the action, film it, and put it on the screen. That’s a very simple principle, but it elevates everything to avoid what you’re talking about, which is stuff that is just pieces of different people moving different things, and you don’t know who it is in the end. Shadow’s color palette is an intense silver saturation. It has this effect on actors’ skin and their spewed blood—almost a yin-yang approach to color. I’d like to know about working with other departments—production design, costume design, perhaps color-graders in post—to emphasize skin and blood.

During pre-production, there was quite a bit of discussion, because we had a good script, as to what the color palette should be. Once Zhang decided he was going to make a motion-picture version of a Chinese ink-brush painting, every department worked on every detail from it—to design of the sets to costumes to props. They were all what you saw on the screen, and there were screens and screens in the palace that were calligraphy on silk—like, waves and waves of them—and the interiors were all black, gray, and white, and so were the costumes, so that what you saw on the screen was actually what we shot in that regard.

Of course, we filmed in color, but that was the color of what we were filming, and with the skin and blood, there was some color-grading to make it all feel like it was of a piece. Basically, the departments, including FX, worked together to make sure what we built and what people were wearing was what we saw on the monitor and what we got in the movie. We had very little green-screen, so it was all a work of, “How do we create a Chinese ink-brush painting movie?”

Your first collaboration with Zhang was Hero, where you worked as a camera operator. How was that experience, as opposed to your subsequent collaborations as director and DP?

We were really just getting to know each other; Chris Doyle was the DP. On Hero, I was shooting a lot of plate shots—the beautiful scenery and open spaces, with no characters and close-ups of people—but Zhang really responded well to my way of capturing those types of images and scenery, and we felt that, aesthetically, we had a lot in common. After Hero, we just ended up working together and we’ve made 11 movies. Our sensibilities were very similar in terms of composition, use of color, all that stuff.

You recently made a feature directing debut. How might taking up these duties have changed your philosophy and work process as a DP?

The use of my brain and everything, how I think about what I’m doing as a DP, is completely different from how it works as a director, and it was a very interesting experience to have to simultaneously balance the visuals, storytelling, acting, sound, music—everything—and just focus more on using all elements to tell a story, as opposed to creating the visual presentation, which is much more focused on one thing. So when I made that movie and came back to working as a DP, I felt I had a much better understanding of how the director’s mind was working and some decisions I was making. Previously, I might not have been as sensitive to that.

Shadow is now streaming on Netflix and available on 4K/Blu-ray/DVD.