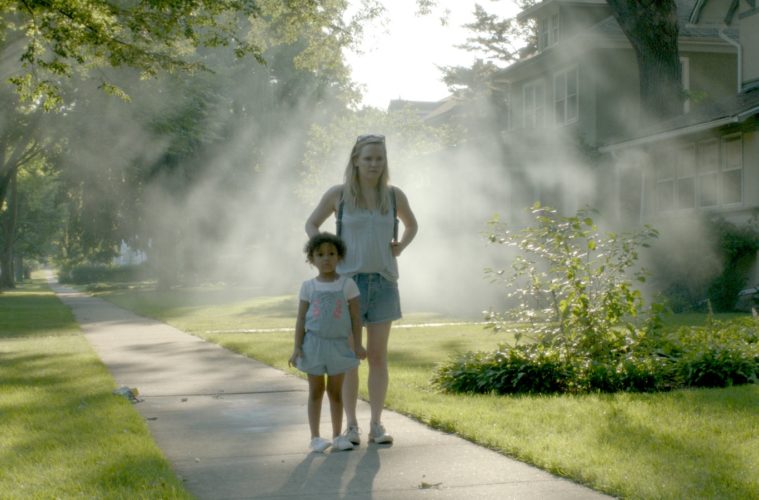 Saint Frances is a warm-hearted indie comedy that captures the awkwardness of adulthood with real precision. Every one of these awkward moments–and there many–involves Bridget, an aimless 34-year-old beautifully underplayed by star and screenwriter Kelly O’Sullivan. This tone of enjoyable (for the viewer) embarrassment is set in the opening minutes of first-time director Alex Thompson’s SXSW award-winning feature. An intense guy at a party pummels Bridget with a somber story “full of self-loathing and shame,” not to mention suicide. He then reveals it was just a bad dream. A forced exchange follows: “How about you, what do you do?” he asks. “I’m a server at a restaurant,” she responds. “You’re still in your twenties. It gets better.” “Actually, I’m 34.’

The impact of age on how we view the world and make decisions is a key theme in Saint Frances. During the course of this brisk effort, Bridget faces a variety of age-related issues. Some are deeply personal, while others involve the same-sex parents of the young girl she’s hired to nanny. This little girl is Frances, a six-year-old firecracker nicely played by Ramona Edith-Williams. Her parents, Maya (Charin Alvarez) and Annie (Lily Mojekwu), have recently had a new baby, and need someone to watch Frances.

Bridget chooses to have an abortion soon after she starts watching Frances, and O’Sullivan’s script is remarkably wise in its handling of this decision and its effect on her. Bridget never regrets her choice, but the impact on her body means she also cannot quite move on. The closure she arrives at by the film’s end feels well-earned. As Bridget deals with frequent bleeding — not an issue for the sweet, but not particularly helpful Jace (Max Lipchitz) — she also grows closer to young Frances.

Bridget’s relationship with Frances’ parents is far trickier. But the loneliness of child care, as both a parent and a caregiver, leads to a later bond with Maya. She is suffering from postpartum depression, and in dire need of a friend. Abortion and depression are serious concerns, but Saint Frances is also very, very funny. “I don’t even know why I’m crying, I’m an agnostic feminist,” a great line uttered by a tearful Bridget during a powerhouse scene with Annie. The film ends with a literally laugh-out-loud moment between Bridget and Frances–a scene as sweet as it is funny.

The notable missteps in Saint Frances all involve unnecessary peripheral characters. The first is a lengthy, cliche-ridden sequence with Bridget’s youthful parents. Quite frankly, Saint Frances is a better film than this all-your-friends-are-having-babies scene. It adds little to the story beyond further strengthening the audience’s feeling that Bridget deserves better people in her life. Another example is Frances’ egotistical guitar teacher, an obnoxious character who exists mainly to serve as another bad mistake for Bridget.

Then there is an old Northwestern classmate of Bridget’s, also a neighbor of Maya and Annie’s and the mother of an obnoxious school-aged boy. She is quite literally an awful human being. Her scene barely makes logical sense–the age difference between the boy and Frances makes it seem unlikely that the kids would even play together. It also feels illogical that the sad but smart Maya would even allow this monstrous neighbor into her home, something that is even less likely once the old friend asks Bridget to fill her teacup, and then head next door to prepare a snack for the children. The scene’s only saving grace is the great moment when Frances pleads to Bridget, “Take me with you.”

Despite these weaker moments, Saint Frances qualifies as a smart, sweet, and funny feature. It marks Thompson as a filmmaker to watch and O’Sullivan as an actor and screenwriter with an extremely promising future. Saint Frances is a character-driven effort that tackles big themes in a wonderfully down-to-earth manner. That’s a tricky balancing act, but Thompson and O’Sullivan pull it off.