Rotterdam Review: The Cloud in Her Room is a Confounding, Mesmerizing Portrait of Loneliness 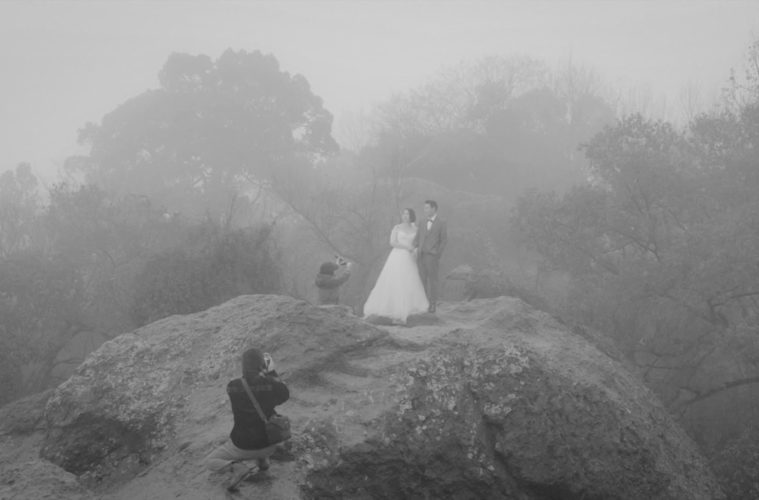 The Hangzhou of Zheng Lu Xinyaun’s The Cloud in Her Room is a funereal city, a protean place rife with cranes and construction sites, where new buildings mushroom overnight and craters devour the earth beneath. People do not belong in that 10-million people’s metropolis as much as inhabit a liminal space–transient presences in a city in constant flux. “Anytime I come back it feels more different than before,” says Muzi (Jin Jing) halfway through her homecoming. A 22-year-old back in town for the New Year festivities, she saunters through her native turf with the wide-eyed wonder of someone who’s been jettisoned into a foreign planet.

And how to blame her? Everywhere she turns, the landscape changes face, and things keep falling apart. Her divorced parents have long abandoned the old family flat perched atop a serpentine of asphalt and cars plowing through the city. But the former home, or its derelict and scarcely furbished remains, still exerts a magnetic attraction on Muzi. As Zheng’s perturbing debut feature opens, there she is, tiptoeing through empty rooms, whirlpools of dust motes dancing around her. She opens a window: it falls off the hinges, and shatters several floors below.

A curious kind of sadness percolates through Zheng’s enigmatic universe. Like the narrator in Jorge Luis Borges’ “Aleph”–a short story several decades and time zones away from Cloud–Muzi’s pain comes from watching, hopeless, as a universe slips away from her, wherein every little change in the landscape is the first of an endless, unstoppable series. This is a story of alienation, a film that finds its beating heart in a young woman’s struggle to reconnect with a place that looks nothing like it used to. It’s also a ghost story, for present-day Hangzhou–a city cinematographer Matthias Delvaux depicts in elegiac black-and-white–is dotted with phantasmic presences that surface straight out of Muzi’s past.

The young woman used to date a lad from town, but the relationship died in thin air. A chance encounter with a local bar owner rouses old memories: she treats him as a simulacrum of that first love, and tags along for some drunken reminiscing. Muzi’s father (Ye Hongming) met another woman (Liang Cuishan) and started a new family. Her mother (Lui Dan) also found new love, but from the moment she first graces the screen, something in the affection with which Zheng captures her makes those segments ring as an anticipated obituary. “Life is short,” she warns Muzi, and just how prophetic those words are only becomes apparent much later. And so the film unfurls in an intoxicating and disorienting bliss, straddling past and present and crisscrossing from one flashback to the next until the narrative scaffolding evaporates in a collage of episodes, of flickering and lyrical images.

There is not so much plot in Cloud, at least not in that conventional, linear understanding of the term. And that’s the key to the film’s confounding allure. The alienation that permeates Muzi’s homecoming finds an equivalent in the multiple dissonances Zheng scatters throughout her work. Muzi, in some fundamental and literal sense, breaks down with the film itself. Much like Hangzhou, Cloud’s aesthetic remains under perpetual construction, as Delvaux juxtaposes a crisp, digital palette with grainier iPhone footage shot from Muzi’s POV, disseminating negative images and split-screens all across the woman’s journey.

It’s a choice that prompts interesting questions around the nature of Zheng’s debut: Is it fiction? Documentary? Some odd hybrid? There are moments when Muzi, phone in hand, interrogates the folks she’s filming, and the segments register as confessionals. But they also crackle with the urgency of a go-for-broke quest to patch one’s past back together, to find something to cling onto in a shapeshifting universe. In a pivotal juncture, Muzi’s mother asks her daughter: “if I’m gone, what will you do?” And the frame splits, the images turning negative, as if the medium itself were to crumble under the looming loss. In another film, these stylistic choices would strike as self-aggrandizing gimmicks. Here, they cut to the heart of Muzi’s loneliness: a youngster fumbling after a mirage as elusive and mysterious as the idea of a stable place in the world.

The Cloud in Her Room premiered at the International Film Festival Rotterdam.