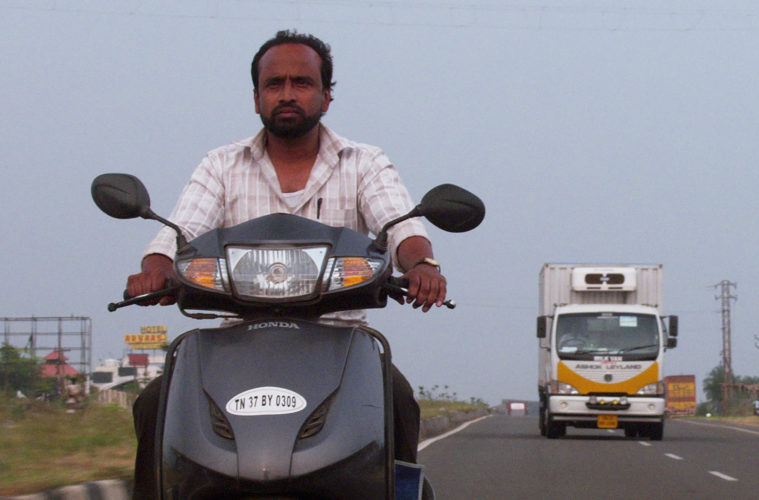 Here’s a film for which the label “low-key” feels particularly misleading, one whose power resides in its simplicity, in its ability to conjure grace out of a beguilingly ordinary tale. Nasir, Indian writer-director Arun Karthick’s sophomore feature, is a film of quiet pleasures and unassuming wonders. It follows a day in the life of the salesman it is named after, and unspools at his becalmed and contemplative pace. It opens with the sound of a morning prayer and retains that early morning dream-like aura, locking you in a state of reverie and then shattering it in a finale of startling violence.

A Muslim man in the southern Indian state of Tamil Nadu, Nasir (Koumarane Valavane) lives with his family in the city of Coimbatore, where he works in a Hindu-run clothing shop. His adopted son Iqbal (Sabari) struggles with a learning disability, his wife (Sudha Ranganathan) must leave town to drum up extra cash, while his cancer-stricken mother lies in bed in a wide-eyed, agonizing trace. It’s all fodder for what should ostensibly play out as a bleak exercise in misery, and yet 27-year-old Karthick never dips into cheap sentimentalism. Yes, Nasir makes no mystery around its protagonist’s dire circumstances. But the film retains a hopeful, near lilting tone, trailing behind Nasir and documenting a routine where simple daily gestures carry the awe of revealed things. A queue to the neighborhood’s well at the crack of dawn; a cigarette smoked before work, the streets still empty, the voices still whispers; the exchanges with customers browsing through shirts and saris; the day’s prayers; the brief, intermittent pauses between the chores – each and every one of Nasir’s lyrical tesserae reads as an invitation to open up to the world and seek out its hidden beauty.

Which is not to suggest the film unfurls free of conflict. Karthick said the urge to tell the story came from a tragic and real-life experience. During a brief stint as coffeeshop owner in Coimbatore, he once witnessed hundreds of Hindu extremists ransack the Muslim shops in his street. The riot was nothing surprising: under India’s PM Narendra Modi’s right-wing rule, religious-ethnic strife between Tamil Nadu’s Hindu majority and Muslim minority has skyrocketed, resulting in several fatal lynchings. And yet for the longest part of its breezy 79 minutes, Nasir leaves those threats to hang in some distant and nebulous region, belched out from the city’s loudspeakers rallying the Hindu community to crush “the Muslim scum,” and echoed in the everyday racism of Nasir’s Hindu boss: “they should fear us.”

Intramural tension is omnipresent, but it registers as background noise in a film that seeks to drown brutality under a succession of lyrical rituals and shots: hands being washed before the daily prayer, Iqbal’s half-colored drawings, a lamp reflecting the shapes of bright tropical fish over the crammed apartment’s walls, a fly resting on grandma’s open palm. There are moments when Nasir scintillates with the slow-paced, observational charm of Jim Jarmusch’s Paterson, another film committed to uncover the incidental charms of ordinary things. That Nasir should fancy himself as poet helps corroborate the analogy: asked to recite some verses, he describes himself as a man “at the evening of [his] youth,” and the words ring true to the coworkers who listen in raptured silence. There’s an ancient, weathered aura about him, but that “old-fashioned” label they toss him hardly captures it: this is not a man who lives outside of his time, but one who shares an almost otherworldly connection to the earth he walks on, to its rhythms and wonders.

Shot by Saumyananda Sahi in 16mm, Nasir is rich in textural pleasures. A saturated palette makes colors pop, from the neighborhood’s pastel buildings to the myriad shades of reds, purples and ochers burning off the store’s clothes. Karthick shares the writing credits with Dilip Kumar: it’s on his short story A Clerk’s Tale that Nasir is based. “Your name is Mehboob Khan,” began Kumar’s text, locking the reader in a second-person perspective that made one’s identification with the salesman (Mehboob in the text, Nasir in the film) almost inescapable. Here, the 4:3 aspect ratio helps elicit something similar, boxing you in with Nasir, while the sound, recorded in mono, reverberates from the frame’s center. It’s all designed to converge on the man–a proximity that feels all the more disturbing once the film jolts to its staggering climax. But if that distance is brought to a zero, credit for it goes to Franco-Indian theatre director Valavane, in an assured big-screen debut, playing Nasir with what feels like a genuine affinity. He may well be “just someone random,” as people call him. But for a little over an hour, that unassuming man and the unassuming life he leads glow with the beauty of an uncharted world.