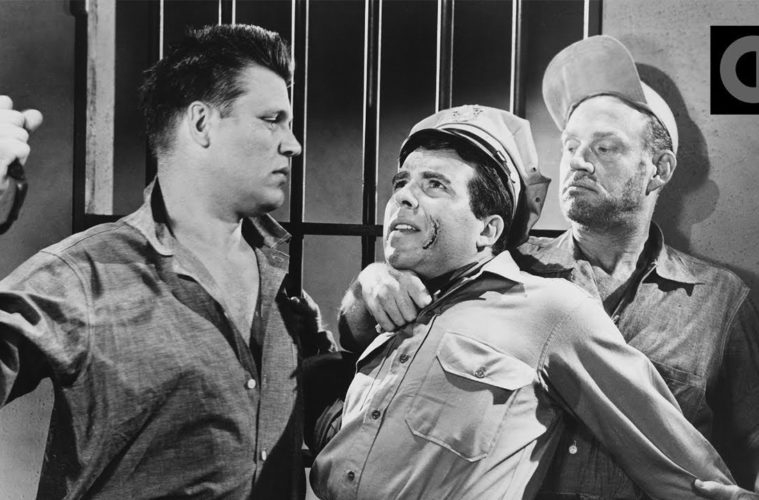 ‘Riot in Cell Block 11’ Hits Criterion: The Strange Story Behind a Low-Budget Classic As the old saying goes, every film is a documentary of its own production. This takes on varying degrees of truth, but it feels especially salient when examining the form of the docudrama. Films that attempt to seamlessly combine fact with fiction have, by nature of the form, more documentary elements than most, or at least pointedly obvious ones that can be studied beyond their aesthetic quality. Riot in Cell Block 11, an early feature by director Don Siegel, is a perfect example: a thrilling story of a prison break on its surface, but also a critique of the 1950s prison system. It’s a weirdly fascinating work, perhaps more interesting as a historical document than piece of artistic craft, though to disregard the directing by Siegel (Invasion of the Body Snatchers, Coogan’s Bluff) would be quite ignorant.

Riot In Cell Block 11, released in 1954 and now on Criterion Blu-Ray, came on a wave of politically charged docudramas that had been produced since World War II. The genre first bloomed after a steady string of hits from producer Louis de Rochemont, who mounted the March of Time series through World War II. He’d moved to feature films immediately after the war, most notably on Henry Hathaway’s The House on 92nd Street and Elia Kazan’s Boomerang! de Rochemont’s style became code for a certain style of realism in film, even if both his documentaries and features were charged with too much recreation. In a Reader’s Digest article from 1949, Eugene Lyons writes, “The film reporter, [de Rochemont] argued, has as much right to describe a scene in pictures after the event as a report to describe it in words. Besides, he maintains, re-enactment is frequently sharper and more detailed than the ‘real’ thing.”

The producer of Riot in Cell Block 11 was Walter Wanger, whose career had been quite different from de Rochement — his name can be found on megahits like Stagecoach and Cleopatra, to name but two prominent examples. Riot is thus an odd tangent in Wagner’s career, but the producer’s backstory provides some motivation: Wanger shot a talent agent, Jennings Lang, who apparently had some dealings with his wife. The blow was non-fatal, but the producer received a four-month prison sentence in Folsom, California for the offense. “I decided after seeing what happens in prisons,” a January 17, 1954 New York Times article quotes, “to do a so-called prison picture.” Wanger’s idea was to do it big: a 1953 Motion Daily Picture article cited that it would be filmed in 3D with Crane Wilbur as the director under Allied Pictures. It’s not exactly clear what happened to Wanger’s original idea — perhaps scrapped in favor of location shooting in Folsom — but the first minutes of Riot In Cell Block 11 clearly establish it as less motivated by message than Siegel’s intensely fluid direction. Chris Fujiwara argues, in his Criterion essay, “It is the first film to reveal the deep sense of violent, unresolvable contradiction that would animate the director’s greatest work.” The film is basically balanced on the hinges of order and chaos. After an opening narration that sets the stage, Siegel’s camera tracks through the prison to give us the sense of daily routines: the various codes used by officers to open doors, the procedures for feeding, and the all-so-important security. And, then, it launches right in: the film barely establishes its important players before the first part of the prison takeover commences, with the members of Cell Block 11 taking four guards hostage and blocking the area’s sole entrance.

This calculation of violence is treated with respect, however, and the film’s politics complicate our relationship to these prisoners as they slowly come into focus. The rioters are not staging manic violence, but simply fighting for better rights and living conditions, something the warden (Emile Meyer) wants as well. It is only the outside factors that complicate this — not everyone in the prison block wants to resort to violence, and there’s a media frenzy outside that is all too happy to capture the bloodshed. (One gets an amusing and violent comeuppance, nevertheless.)

The tension between dignity and violence is amplified by Siegel’s camera. Cell Block’s authentic locations and use of real prisoners give a sense of character to every shot, especially in the mass-scale photography that displays a wobbly group dynamic between Neville Brand’s leader and those secretly dissenting — often for comic effect, as when, in one scene, prisoners charge down the gigantic corridors just to reach a ringing telephone Siegel’s masses, often shot in large group shops, resemble amorphous geometric shapes attempting to form something coherent, but  always breaking apart at the edges. This tension is palpably felt during the film’s biggest scene, as the rioters take to the recreation grounds as a mob and are slowly turned back by a line of cops with rifles. Siegel tracks the line as it slowly advances, cautiously quelling the possible violence while also ratcheting stress as the camera pushes closer and closer into the danger.

The final resolution is, of course, a cynical, half-assed push that actually ends with more jail time and negligible results — if, at least, a non-violent one for the innocents. Could it conclude any other way? Siegel’s films often end on these ambiguous notes, but, at the end, it’s Wanger’s own voice that defines the final takeaway. In an article he wrote to promote Cell Block, the producer states, “Except for that small knot of incorrigibles to be found in every prison population, they are people—albeit unfortunate ones. They are the stupid, inept, or unlucky minority of those who commit crimes and get caught.” As Brand’s footsteps echo down the corridor in the final shot, that’s all that can be said of the courageous man: he is a person, simply fighting for a better life within the circumstances he has.

Riot in Cell Block 11 is now available from The Criterion Collection.