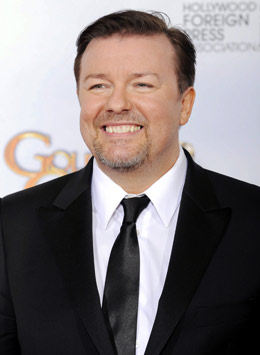 While the human actors that come aboard the various feature films surrounding the The Muppets likely aren’t the main draw, we have to give credit to Disney for usually securing some of the best in the business and more importantly, fitting for the franchise. After Amy Adams and Jason Segel took the reigns for the previous film, co-writer Nicholas Stoller and director James Bobin are looking to wrap up their cast before a January production.

With Ty Burrell on board as an Interpol inspector, The Hollywood Reporter chimes in with another addition. They let us know that comedian Ricky Gervais is in talks to take on a major role (not unlike what Segel previously played, in terms of prominence) in the film which sees our characters trek around Europe.

As we know, Gervais actually shot a cameo for the first film, which was sliced during the edit, and his exact role here is still under wraps. With these two roles already locked down, the last major remaining one comes in the form of a Russian femme fatale, which still has yet to be cast. Expect many, many cameos to come forth as a London production kicks off soon for a December 20th, 2013 release.

Are you looking forward to seeing Gervais in a Muppets film?