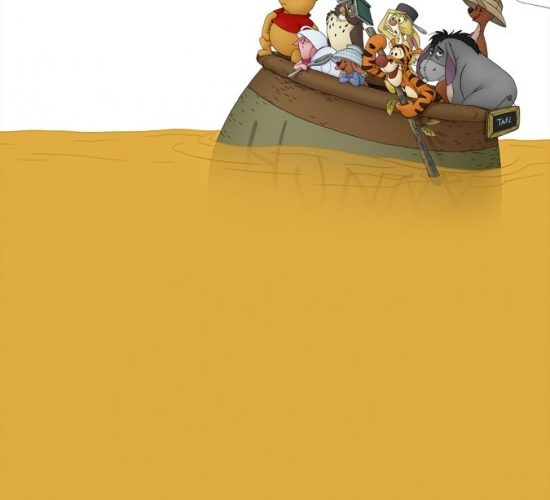 In a summer overstuffed (and fluffed) with superhero sagas and crude comedies, I was eager to take in this simpler tale of a silly old bear. Tapping into the current trend of nostalgia (often aimed at those of us who came of age in the ’80s and ’90s), Disney has brought back Winnie the Pooh complete with all the lovable characters we fondly recall from our childhoods. As Pooh sets forth with a grumbly tummy seeking a pot of honey, by his side as always is oft-fretful Piglet, ever-glum Eeyore, long-winded Owl, loving Kanga and her adventurous Roo, frequently flustered Rabbit, the one and only Tigger and of course Christopher Robin. As a child, I devotedly watched Pooh’s adventures. So, when that melodic and iconic theme song swelled at the film’s start, my eyes welled up in eager anticipation. But did this return to the Hundred Acre Wood live up to my admittedly high expectations?…In fact, it did – and then some.

With a clever ad campaign clearly intended to attract 20-somethings who grew up watching Pooh and pals on TV, complete with a compelling trailer that plays upon our warm recollections and ups the cool factor with a sweeping alterna-pop ballad, I was slightly worried executive producer John Lasseter would attempt to improve upon Pooh and crew by giving them the kind of edgy movie makeover many cartoon features today take on. And while a flirtation with dark matter has proved wonderful in a number of Pixar films, Lasseter wisely chose not to re-invent the wheel here. Thankfully, there’s no infusion of mature material or innuendo to amuse adults, which would be ill-suited to this innocent world of children’s toys. Instead, the filmmakers visually and musically allude to past Pooh productions (and some other memorable films) to tickle our sense of nostalgia while masterfully crafting a string of related misadventures with a simple elegance and an earnest charm. Kids today will doubtlessly take to the characters and their winsome silliness, while adults can reminisce and enjoy the lush and clever visuals. The animators breathe fresh life into the hand-drawn form with a lovingly realized and lovely adventure that launches their bumbling subjects into frightful forests, sunny plains, and intrusive fields of storybook text that literally trip up Pooh and friends.

Happily, Jim Cummings reprises the roles of Pooh and Tigger, parts he has played since the late 1980s. Hearing his familiar and jolly tone made me feel like a kid again, eager for a new adventure with this self-admitted “bear of little brain.” His inclusion is the kind of detail indicative of Disney and Lasseter’s respectful approach to Pooh. Rather than rebooting, the filmmakers maintain key touchstones of tone and past works, while adding thoughtful fresh elements like new voice talent and a dreamy and delightful score. Among the new additions to the voice cast are Tom Kenny, best-known as the voice behind SpongeBob Squarepants, who lends a subtler-than-SpongeBob performance to Rabbit, Bud Luckey, who voiced the sad clown Chuckles in Toy Story 3, fittingly takes on Eeyore with a gloomy and gravely tone that is reminiscent of Jeff Bridges in Crazy Heart, and comedian Craig Ferguson, who memorably portrayed a two-time amputee Viking Gobber the Belch in How to Train Your Dragon, takes on Owl, the self-aggrandizing scholar of the Hundred Acre Wood. More modern touches include song numbers performed by Zooey Deschanel and M. Ward of the indie folk duo She & Him, whose dulcet and melodic style suits the mellow and sweet tone of the film perfectly. It’s she who sings the lilting lyrics of “Winnie the Pooh” at the film’s start and returns to lend her voice to a selection of cheerful songs along the way.

It occurs to me, I’ve gotten so caught up in the artistry of Winnie the Pooh that I’ve neglected to tell you the plot. While Pooh is searching for a hunny pot [sic], he discovers that Eeyore has lost his tail, and while his friends gamely seek a proper replacement part, Christopher Robin goes missing. The excitable animals decide he has been kidnapped and so set a trap for the wicked monster they are certain has captured their friend. Along the way there are spirited song numbers, misunderstandings, and expertly constructed action sequences. (My personal favorite involves Tigger giving Eeyore a superficial makeover to transform him into Tigger Too!)

Ultimately, Winnie the Pooh is pitch-perfect. Thoroughly silly, sweet and deeply delightful it’s good old-fashioned fun that will appeal to the whole family. But more than that, it’s a rare achievement in that it’s cool yet cheerful, nostalgic yet does not pander, old-school yet inventive. It’s stupendous and an absolute winner.

Oh! And be sure to stay through the animation-filled credits for one more adorable scene.