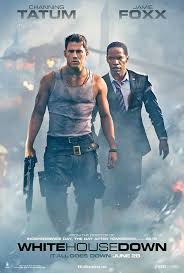 When confronted with the dual “Die Hard in a White House” thrillers Olympus Has Fallen and White House Down, action fans might find themselves sympathizing with ambivalent voters who exclaim “I don’t think either candidate is very good.” Although Antoine Fuqua’s movie hit first, and it’s arguably the more violent of the two, Roland Emmerich’s event flick is easily the louder and dumber constituent. There’s so much money and talent burning on the screen, that it’s often hard to pull back and enjoy it for the made-for-FX tv movie it so obviously should have been. If there’s anything to take away from this, it’s that Channing Tatum has finally cracked leading-man status. It took piloting an alien starship and yelling ‘Aww, hell naww!’ in Emmerich’s Independence Day to catapult Will Smith firmly into A-list royalty; for Tatum it’s trampling the White House lawn with a limousine, while quipping it up with Jamie Foxx’s president as the latter fires a rocket at the bad-guys.

While Olympus Has Fallen felt stylistically like a throwback, White House Down straight-up wants to party like it’s 1999. Cribbing from nearly every action movie of the past thirty years, its like the cinematic equivalent of a concentration game on a long car-ride. “I spy with my little eye, the well-meaning cop with a precocious kid who needs him to prove himself to her.” That’s Channing Tatum’s Cale, and his daughter is Emily (Joey King) who’s tagged along with daddy on his Secret Service interview presumably so she can be in harms way when trouble comes and then later to demonstrate absurd skills to the delight of the audience. Of course, on this day, Agent Walker (James Woods channeling Ed Harris in The Rock), head of the President’s Secret Service, has planned an orchestrated attack—like Harris, he’s been betrayed by his country over the death of son in a covert mission—that will unleash a gang of America’s enemies on the White House. Instead of North Koreans there’s a rabble of rednecks, racists and loons. Soon enough, Tatum’s got his shirt off and his guns blazing, as he rushes to protect Foxx’s wise-cracking, charismatic President Sawyer and retrieve his daughter who was taken during a tour when the goons, led by Jason Clarke and Jimmi Simpson. From here, it’s Tatum and Fox, riffing on one another, and blasting the bad-guys while the pre-requisite think-tank of Secret Service coordinator Maggie Gyllenhaal, Speaker of the House Richard Jenkins, and Michael Murphy’s Vice President deal with issues of succession in the event that Sawyer is killed or kidnapped.

Emmerich fastidiously sets-up every action or line of dialogue from the second half by foreshadowing and underlining events in the first, which results in a slow build leading to an inevitably ridiculous climax. In other words, it’s exactly like every other Roland Emmerich movie you’ve seen,  with Anonymous the only exclusion. In fact, about the only real litmus test you need is whether or not you buy Emmerich’s particular brand of silliness, whose earnest, optimistic enthusiasm has always played closer to satire for me. That of course, makes it more appealing than Michael Bay’s big glossy cynicism; at least most of the time. Everything is so erratic at the script level, and so punched-up at a sensory level, that thinking isn’t just discouraged, it’s almost impossible. The cast, which are always over-qualified for these things, helps stabilize a lot of the really dumb moments, most of which deal with foreign policy so bugnuts that we expect it’s been written by a fourth-grader who failed Social Studies two years in a row. Foxx doesn’t quite have the temperament or presence to sell us this guy as the President, although a good bit of this is down to Emmerich’s insistence that Sawyer be a hip cat first, and a leader of the country second. Tatum has gone full action-hero, and while it will no doubt serve his career immensely, it’s his least interesting recent appearance. Clarke and Woods are good as the villains, and they appear to be the only ones who truly understand that the material cannot be played with anything other than tongue firmly in cheek.

Ultimately, I was bored by White House Down, which is pretty much inexcusable given the level of sublime idiocy on display; the movie is bloated and trudging early on, and too hectic finally, to really walk us through its own planned trajectory. It feels like a kid trying to give you a gift, but they get impatient, and tear it open themselves and start fiddling with it, off-handedly trying to explain what it is at the same time. It’s not good by any means, but if you take it in the right spirit—if this sort of things IS your bag—then you might get some fun from it. For me, it lacked the right spark of creativity and wit that good trash needs. Case in point; Sawyer is kicking one of the villains, and screaming ‘’Take your hands OFF my Jordans!” What I would have given to have Foxx, in a Harrison Fordian growl, deliver “Get off my Air-Force Ones!”