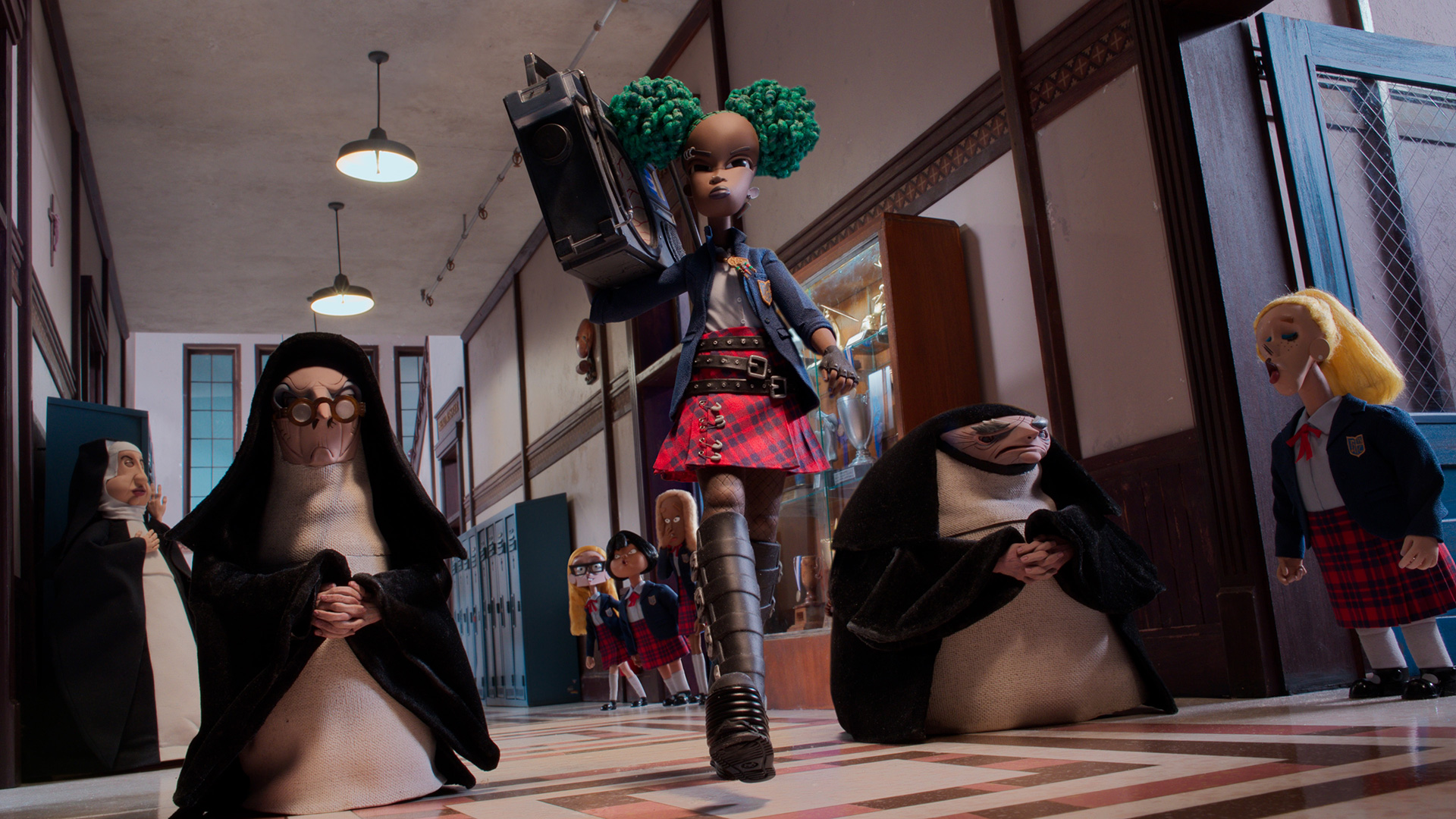 Sometimes tragedy begets opportunity. Case in point: Henry Selick’s The Shadow King being unceremoniously scrapped by Pixar. It was supposed to be his follow-up to Coraline and buzz was strong before things went south. So while Selick took a creative step away in the aftermath, he found Key and Peele debuting on Comedy Central. The director would ultimately finish its five-season run and declare Keegan-Michael Key and Jordan Peele the “boldest, bravest, and funniest” comedy duo of his lifetime, vowing to reach out and broach the subject of collaboration in the future. While that inevitable meeting’s purpose was to enlist their vocal talents, Peele turned the tables to ask if he might also produce whatever Selick did next. And there in the drawer sat Wendell & Wild.

Born as a short story with early sketches of the titular demons based on Selick’s sons (and ultimately credited as an unpublished book he wrote with Clay McLeod Chapman), the conceit’s hapless brothers searching for a way to enter the Land of the Living proved perfectly suited for the sort of manic rapport Key and Peele effortlessly brought to their sketches. (Peele cites “Prepared for Terries” as inspiration for their characterizations.) Plot points were reworked, the lead was shifted from an adult woman to a teen girl, and the whole became infused with an Afropunk soundtrack to provide young Black children a conduit to their own experiences through a lens specifically courting them. X-Ray Spex, Death, and more blast through Kat’s (Lyric Ross) boombox.

Despite the title, she is our protagonist. A few years removed from her parents’ death (a tragic car accident she survived), Kat has bounced around the system only to eventually land in juvenile detention. Sprung as part of a youth-reformation project, she is now on her way back to her old hometown and its Rust Bank Catholic School for Girls. The drive down shows how derelict this once vibrant place has become—so much so that Kat wonders if Father Bests (James Hong) only took her in for the money the state promises as compensation. With the overall economy running through cutthroat private prison magnates the Klaxes (Maxine Peake and David Harewood), there’s little room for actual progress when crime is literally what pays them.

Themes like the jaded capitalist takeover of a wholesome family town and how profiteering off incarceration demands that jails be filled without a realistic chance for rehabilitation are heavy and relevant background information, but they never really come together beyond a superficial need to create villains out of the Klaxes. They work on that level, though, so you can excuse just how overstuffed the script is with social issues despite never quite engaging with them. (Though that’s also perhaps the point: such issues are sadly very transparent to today’s youth.) The Klaxes have always been a bane to this town, but they’re now on the cusp of finally wiping it from the map completely—and willing to do whatever is necessary to fulfill that goal.

And while Kat is on some level taking up her parents’ fight against them (the Klaxes tried purchasing their brewery’s land), her greenlighting the raising of the dead is strictly personal. All she wants in this world is to reunite with Mom and Dad. If that means accepting a supernatural deal on behalf of Wendell (Key) and Wild (Peele), so be it. She’ll ignore Sister Helley’s (Angela Bassett) warnings of bad omens when a demonic mark of teeth appears on her hand and willingly swear her allegiance to them because the chance that they’ll hold up their end of the bargain is simply too appealing. They just want to build the fair their father (Ving Rhames’ Buffalo Belzer) rejected in their own realm. What’s the harm in that?

Considering Selick’s involvement and the protagonist being a teen girl, the easy comparison point to be made is Coraline. Wendell & Wild actually skews much closer to ParaNorman, though, in style and substance. At the heart of it all is Kat desperately trying to get back the love she lost and never allowed herself to reclaim through friendships afterwards. She feels responsible for her parents’ death and believes herself to be a curse to anyone who gets close. So she pushes them away. Sometimes that’s not necessarily the worst thing—the so-called “poodles,” led by Tamara Smart’s Siobhan, are sickeningly “normal” to the point of annoyance—but it also prevents Kat from finding real human connections to people like Sister Helley or her trans classmate Raul (Sam Zelaya).

Much like the Klaxes’ underlying issues, Raul being trans also seems undercooked. It’s one thing to normalize having a trans character by simply including one; it’s another to sprinkle his story with random instances of misgendering and never give him room to engage with what that means. Selick and Peele seemingly want to have their cake and eat it too with all their politically adjacent subplots, including them as color so as not to single them out only to constantly shine a spotlight on them without a desire to delve deep enough to say anything beyond checking a box. There’s a tug-of-war between plot and characters that always seems won by the former to the latter’s detriment. If not unforgivable, it is frustrating.

Thankfully, the style has a way of distracting from those shortcomings. Selick wants us to see “the strings” by consciously refusing to smooth over seams and hitches with CGI. He wants us to know this has all been done by hand and recognize the artistry in every frame. It only enhances Argentinian artist Pablo Lobato’s gorgeous character designs. Some, like Wendell and Wild, look like their actors and others, because they’re shown alive and dead (in differing states of decomposition), are given two wholly separate aesthetics to ensure audiences know who is real and who was brought back to life. Add the kinetic soundtrack, “visions” having a two-dimensional alternate reality, and the fun insanity of Belzer’s “realm of the danged” and Kat’s nightmares and you’ll never be bored.

Can it all be a bit much? Yes. The whole is so dense with exposition, themes, and characters it can’t help feeling rushed—even when we’re seemingly given breaks via Wendell and Wild’s comedic “bits.” Continuously going back and forth between Kat’s adventure and that of the demon brothers (they don’t necessarily line-up completely until the climax) exacerbates things by shifting focus in fits and starts, but cultivating that parallel is deliberate. Because—beyond the underlying politics—this is really a story about the relationship between parents and children. It’s Kat risking everything to see hers and Wendell and Wild doing everything to escape theirs. It’s about slowing down to recognize what matters and how love, if real and present, doesn’t end with death. Love endures.