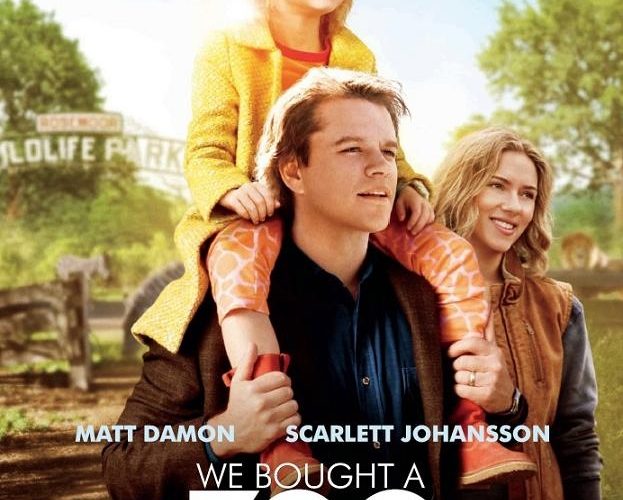 [Review] We Bought a Zoo When it comes to coating a film in sentimentality, earnestness and a generally warm mood, few succeed like director Cameron Crowe. For his return to filmmaking, following 2005’s critical bust and box-office underperformer Elizabethtown, he has settled on the safe, all-audience drama We Bought a Zoo. The feel-good material seems like an easy, knock-out-of-the-park for the Almost Famous and Jerry Maguire filmmaker. But with co-writer Aline Brosh McKenna (The Devil Wears Prada, 27 Dresses), Crowe’s script has a few missteps that prevent the fully satisfying experience that’s so clearly intended. Taken from Benjamin Mee‘s memoirs, the writing duo transplants the true story from the English countryside to the hills of California and, with some research, it is clear the fundamentals of this story have been heavily altered. But Crowe and McKenna are in the business of movie-making and we’ll look solely at the final product. Mee (Matt Damon) has lived a life on the edge as a reporter, whether it’s amidst killer bees or a thunderous hurricane. We enter his world six months after his wife has passed away, still finding it difficult to cope. His two children (Maggie Elizabeth Jones and Colin Ford, the former the most adorable child put on screen and the latter doing the angsty-teen stereotype right) are harder to handle without his wife and, in the need of a massive change, he decides to go ahead and buy….well, you know the rest.

And it does play out exactly how you imagine, elevated with Rodrigo Prieto‘s sun-drenched, vibrant cinematography, Jónsi‘s heavenly score and an affecting lead performance from Damon. And though it should be a walk in the park for Crowe, for someone whose career has been rooted in the optimism in human nature, there a number of awkwardly handled situations and characters on display here. Aside from the core family dynamic, there isn’t a single fleshed-out supporting player to be found. So when they need to play off Damon, or his children, most interactions ring false. Scarlett Johansson is the head zookeeper and the extent of her character is being both a flirt and dedicated to her job, something spelled out in her first scene. Carla Gallo is the zoo’s accountant who forces in conflict, before it becomes resolved moments later, a frustrating, recurring event in this script. His Almost Famous star Patrick Fugit does little more than occupy the background, while John Michael Higgins as the zoo’s overtly mean inspector and Thomas Haden Church as Damon’s brother come and goonly when absolutely needed. Here’s wishing they would have been put to better use. Elle Fanning is also riding off her charm shown in spades this summer with Super 8, but she unfortunately only exists to continue that quality as a love interest for Ford’s character.

Despite these flaws, Crowe is able to eek by on his specific, uncynical charm. It comes across cheesy in the trailer, but Mee’s message to his son of just needing “20 seconds of insane courage” to complete a seemingly impossible task is well-delivered and not a bad thing to live by. It is a precise type of Crowe dialogue that is easy to scoff at, but difficult to dismiss. Their relationship is perhaps the most satisfying, with a subplot concerning problems at school being smartly handled by Crowe. Having gone through the traumatic event of losing his mother at an influential stage in life (something duly noted when it comes to Mee’s hesitation to punish), his son has found talent in violent, gothic drawings. They are gorgeous pieces of art and I was glad Damon’s character recognized this, instead of shunning his talent. Crowe also works in the emotionally devastating loss of Mee’s wife (played in flashbacks by the stunning Stephanie Szostak) as the arc for Damon’s character. By the fantastical finale (which feels somewhat out of place here), this idea is hammered home, but it doesn’t take away its effectiveness in earlier scenes. Damon experiences an unspoken longingness, capitalized in a scene where he can’t bear to even look through her photos on his MacBook Pro, eventually leading to breakdown. It takes an actor like Damon to properly convey this emotion without overstepping, and Crowe knows he is the perfect fit.

Zoo is safe bet for Crowe, a necessary stepping stone to relaunch his dormant career. There is nothing about this universal crowdpleaser that pushes boundaries, and the supporting characters are shockingly slim, but it does just enough right with its bright mood and pleasant tone to make for an easy comfort film this holiday season.