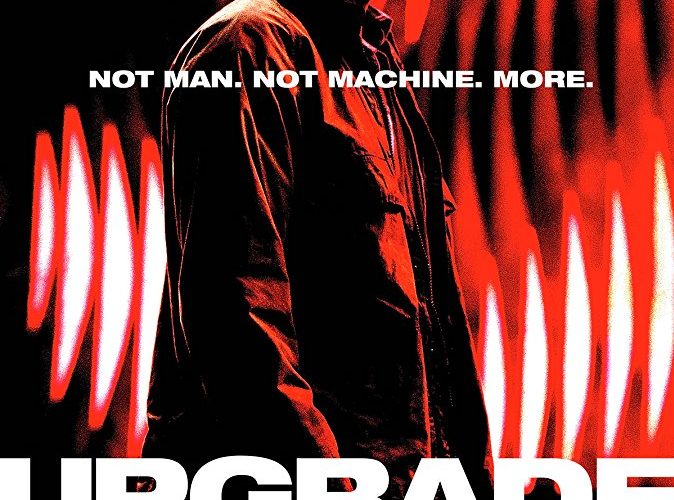 Review: ‘Upgrade’ is Full of B-Movie Thrills and Kills

Borrowing heavily from Hardcore Henry, David Cronenberg, John Wick, and ’80s B-movies, Upgrade is the kind of picture where story takes a back seat to the thrills and kills. Directed by Saw series co-writer Leigh Whannell, the film delivers exactly what it sets out to, providing an ultra-violent and often fun camp thriller that stops just shy of potential cult classic status.

The set-up is simple enough: Grey (Logan Marshall-Green) is an old school auto mechanic rebuilding classic beauties in his garage while his wife Asha (Melanie Vallejo) drives a sleek automated pod that initially appears to have a better traffic safety record than those Teslas in autopilot mode. Like all things, they can be compromised, and after a date night the hacked car crashes in a shanty-town where, of course, Grey grew up. Asha is executed and he’s left for dead, forced to spent his life in a wheelchair until a wealthy tech client with a eerily familiar-sounding name, Eron Keen (Harrison Gilbertson), implants a kind of high definition neurological enhancer in him. Not only can Grey walk again, he can run; that is until STEM (voiced by Simon Maiden) asserts his command over his human form.

A rather simplistic metaphor for performing-enhancing technological innovations and the fears of machine learning, Upgrade freely borrows from revenge thrillers (Death Wish, John Wick) along with man-in-machine B-movies like RoboCop, The Terminator, and American Cyborg. Creating a kind of mash-up of tropes, Whannell makes the most of his Blumhouse-mandated low budget sans giant action set pieces. It’s thrilling enough when Grey seeds control to STEM, who has the good sense to disengage his pain receptors once he starts chasing down his wife’s murderers in dive bars.

More sci-fi comfort food than mind-bender, the plot offers a certain level of predictability as Grey, guided by STEM, retraces the evidence the police missed including goons whose arms have been modified with a machine gun loaded near the vein, along with a tattoo which they seemed to have missed. Of course there’s a cop (played by Get Out’s Betty Gabriel) who discourages him from his own police work, eventually drawing the same conclusions he does.

The achievement of Upgrade is how its body count piles up with clear-eyed action by Whannell, executed with the precision of a cyborg who makes efficient (and brutal) decisions directed by data. Without taking itself too seriously or academically, Upgrade operates with a level of remarkable rigor. This is a film that kicks ass, takes names, and has a healthy skepticism of the future without straying too far away from its B-movie, body horror ambitions.

Upgrade is now in wide release.