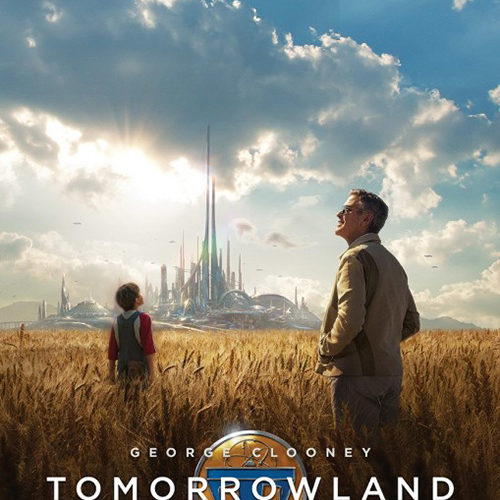 “I get things are bad. But what are we doing to fix it?”

Early on in Brad Bird’s Tomorrowland we are treated to a vision of the future that strives for unquenched optimism, setting up a blockbuster movie ride that wants to accentuate the positive and mortify the negative. In that moment, Bird unveils his titular retro-metropolis to a young boy attending the 1964 World’s Fair, a dizzying, shiny fantasia of jetpacks, flying cars and glimmering, vast silver towers. Young Frank Walker (Thomas Robinson) visits the 1964 World’s Fair at Disneyland and goes, in an instant, from marveling at Uncle Walt’s animatronics on the Small World ride to hurtling through a cityscape that encapsulates everything that Disney and other dreamers like him held near and dear. It’s an exhilarating and joyous introduction to a meticulously created dream-world that plays like the sunny yet visceral alternative to George Miller’s achingly beautiful apocalypse in Fury Road. Bird takes the adolescent yearnings of kids raised up on pulpy Golden Age sci-fi and briefly gives them agency and texture.

It is within these first fifteen or so minutes that Bird proves that there’s passion in this synergistic attempt to bring another Disney theme ride to life, and an ambition to embrace and celebrate the spirit that gave birth to Disney’s own brand of consumer magic. Frank, a young inventor who’s brought his very own jetpack to the fair, is transported to Tomorrowland—looking like the collaborative wet dreams of John Galt and Ray Bradbury—when he touches a special pin given to him by Athena (Raffey Cassidy) a little girl who travels with her own entourage of moody scientists. In The Iron Giant and The Incredibles Bird explored the substantive richness of allegedly hokey 1950’s sci-fi platitudes and found a degree of pulp nourishment there. In its terrific opening, Tomorrowland threatens to be a concentrated jaunt through that same kind of earnest headspace, but then we are treated to the rest of the story, and the grounded humdrum of the real comes seeping into a picture that genuinely seems interested in inspiring.

There’s an awkward tension in the film’s pleading tone for a brighter future and the boiler-plate action milieu that eventually develops as the central mystery gets underway. The present-day story begins with Casey (Britt Robertson), an optimistic but precocious Florida teen who spends her evenings sabotaging the scheduled demolition of NASA shuttle platforms. She’s the early mouthpiece for Bird and Damon Lindelof’s bright-eyed, vaguely elitist dialogue (I say vaguely because very little of anything is completely clear) that finds time for nuggets like “Which wolf wins? The one you feed.” She’s a self-proclaimed optimist that rolls her eyes at her teacher’s fear-mongering climate change presentations and at the defeatist, apocalypse-obsessed culture that surrounds her. Robertson is very good in the role, and at first Casey seems like the perfect gateway to Tomorrowland’s secrets.

When Casey touches one of those fantastic pins from the opening (it’s handed to her on the way out of an overnight jail stay), she’s whisked off to an endless field where she can see the city of Tomorrowland towering in the distance. In a neat touch from Bird, she’s technically between worlds in that moment—seeing the vastness of the future but still capable of bumping into unseen obstacles in the present—and it’s a fun and funny evocation of the daydreamer’s plight. It helps too that the tour she goes on feels like the greatest amusement park infomercial ever created, ending just as our own anticipation peaks. A search for the origins of the pin leads Casey to another winning scene where she enters a nostalgia shop run by Kathryn Hahn and Keegan-Michael Key. While you’re geeking out over seeing Robby the Robot and Gort in the aisle displays, killer androids disguised as humans do their best to blast Casey apart. Athena comes to the rescue, revealing she’s a robot too, and the duo are off to find older Frank (George Clooney), who may have a way to get back to Tomorrowland and save it from whatever calamity approaches.

Once Clooney is in the picture, the overall dynamic of the adventure changes, and, save for a groovy little sequence in which his booby-trapped house helpfully shreds invading robots, the movie loses a good bit of its energy. It’s not the actor’s fault, who is on his usual point, nor is it really the character of Frank, who seems bitter but without real understood reason; the issue comes down mostly to the writing and the odd pacing and tone. By the time Frank comes back into the story, a good chunk of Tomorrowland has passed and we know very little about what’s going on or what the real function of this hidden metropolis is. Even once it is explained—the best and the brightest have walled themselves off in a utopia where they can positively impact the rest of us banal normies who would otherwise hold them back—the concept feels thin and underexplored. Frank tells us some of what he knows, but his time in Tomorrowland is still mysterious, minus a few judicious flashbacks.

Robertson and Cassidy have good, if prickly, chemistry with Clooney, although it is more than a little odd when the pre-adolescent Athena reconnects with Frank and we see the flustered ardor of his former boy-self on his fifty-something face. There’s a hidden past between them that would have probably formed a better movie—young Frank and the robot girl who doesn’t recognize feeling from programming, exploring a city of the future—but it’s still weird when Clooney makes near-smoochy faces at Small Wonder’s V.I.C.K.I. The road trips, sci-fi elements and dichotomous pairing of actors all across the age spectrum are enjoyable enough, and hearken back to the Disney live-action quickies of the 80’s; everything from Flight of the Navigator to Cloak and Dagger gets trotted out here at some point.The largest problem remains with the dialogue and the script, which can’t let go of those on-the-nose points about our own modern cynicism and lapsed spirt of invention.

Although many of the sentiments feel genuine in the moment, they are flummoxed by the script, that sends mixed messages so violently that we never know how much of this is just good-natured hope and how much veers towards Ayn Rand territory. For instance, we are informed that Frank was kicked out of Tomorrowland for ‘inventing something he shouldn’t have,’ which seems like an odd call to be made by a bunch of forward-thinking scientists. Many of these plot inconsistencies may have well been overlooked—washed away by Bird’s warm and genial direction—if it were not for the final third of Tomorrowland, which demonstrates that there was very little reason for this journey to begin with.

In the end, though, all the earnestness and pretend mystery result in a pretty disappointing experience, because once we get back to Tomorrowland proper, we realize the movie never intends for us to explore it the way we want to. There are roughly twenty minutes to go once we meet the big threat of the film, and a solution is quickly reached using the last true bastion of all high-minded, peace-loving intellectuals; explosions. I suspect (and this may or may not be fair) that a good part of the issue lies with co-scripter Lindelof, whose work here bears similarities with Lost and Prometheus, principally that an intriguing foundational idea is only used as scaffolding for genre window-dressing and the core concept lies completely hollow. Still, Bird and the rest of the team took this script to production when it clearly wasn’t quite ready, so they are complicit in the creation of this lackluster version of a great idea.

What really stings, though, is that Tomorrowland may really be onto something with its call for a more hopeful and positive outlook on the future, but it doesn’t give its target audience reason to look upon its ideas in a light that isn’t tainted by preachiness and unchecked nostalgia. As the final reels unspool, and we are meant to be basking in the joy of a new and hopeful beginning, prompting all to follow their gifts, I was left with the unfortunate, lingering question of “Who cleans the toilets in Tomorrowland, and do you get a pin for it?” I guess in a place like that, they probably clean themselves.

Tomorrowland opens on Friday, May 22nd in wide release.