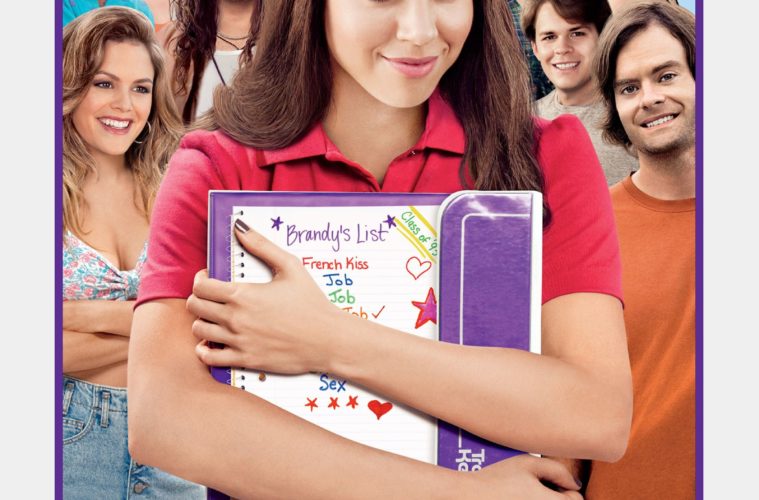 Above all, the To Do List announces the arrival of Aubrey Plaza, movie star, with a role that takes full advantage of the awkward persona she’s now best-known for. Her character, Brandy Klark, is an over-achiever — not just president of her high school Math Club, but also the founder and publisher of Womyn Magazine (yes, it’s spelled with a “y”) — and hasn’t had time for dating. Her family is a fascinating mismatch, including her conservative — he reads Rush Limbaugh’s The Way Things Ought Be in bed — father (Clark Gregg), her open minded mother (Connie Britton), and her experienced / engaged sister, Amber (Rachel Bilson).

In her own personal ghost world (that period between high school and college was chronicled in, well, another summer hit about smart young women), Brandy decides to lose her virginity to a guy — Rusty Waters (Scott Porter), who, according to a drunk Brandy, “feels the way Marky Mark looks.” I should mention the year is 1993, which means no internet is there quite yet to answer these problems and discuss sexual anxieties. Brandy doesn’t have it that easy (until she’s at college and asks why someone didn’t return her “electronic mail”).

Here’s where The To Do List strikes a realistic cord: it accurately captures the pain, joy and awkwardness of a time like this, in a manner that can even recall American Pie. Framing the film in 1993, right before the primitive social network AOL became mainstream, there is nowhere aside from friends and family to get decent advice on these matters. As written and directed by Maggie Carey (who previously has directed shorts for Funny or Die), the film has several gags that work, propelled by the witty energy of a Will Gluck comedy. It’s a shame the film carries an R rating — it may be useful to 15 and 16 year olds. Over-the-top at times, especially in its 90’s nostalgia, the film includes top-rate comic talent: Christopher Mintz-Plasse, Andy Samberg, and Jack McBrayer in supporting performances, containing some of the biggest laughs so far this summer. Despite being a little too old — and, perhaps, too beautiful — to play an awkward, geeky high school student, Aubrey Plaza is an excellent, engaging choice, and The To Do List ups her status from alternative comic / indie darling to movie star.

Maggie Carey’s screenplay and direction contains as much wit as it does energy. I like that Brandy, a Hillary Clinton-esque woman, remains unapologetic on this quest, even as she breaks a few hearts along the way. Even as something that’s a bit cynical, this is true to both the character she establishes and life in general; if anything, Brandy is precisely like those anonymous women the New York Times Magazine profiled a few weeks ago. Just because she doesn’t have time for a relationship doesn’t mean she’s incapable of having a healthy sex life, even if its with a guy she otherwise can’t stand to be around while sober.