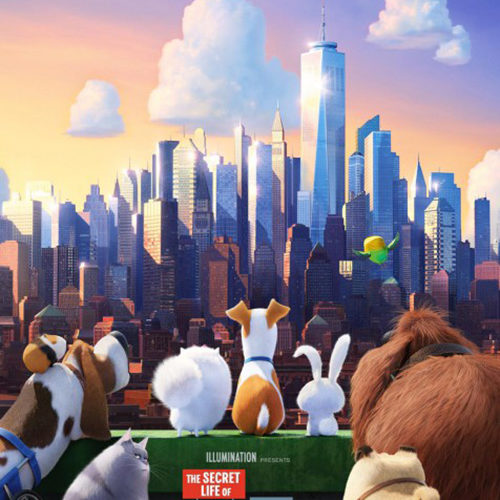 [Review] The Secret Life of Pets

From the start, The Secret Life of Pets makes no secret that it is a Toy Story clone, and while it’s mostly entertaining, it never truly breaks past these boundaries. Chris Renaud and Yarrow Cheney‘s latest animation swings for the fences in terms of giving its characters the ability to go full-on crazy, and if anything, it succeeds in this regard. While there’s rarely a story beat that isn’t expected, there’s just enough humor from its all-star comedy voice cast to enjoy the journey.

At times it plays heavy on the clichés by twisting them in too obvious of a way — a dapper poodle listens to heavy metal when his owner is away — but at other times it simply makes them work like with Gidget (Jenny Slate), a feisty Pomeranian that makes one care for her story because of her earnestness. Other stand-outs are the two main villains: a hairless Sphynx cat with holes in its ears and crooked whiskers named Ozone (Steve Coogan) that is positively demented and the gangsta rabbit Snowball (Kevin Hart) who is wildly twisted but with humor underlying his appearance.

We start with the life of Max (Louis C.K.), a Jack Russell Terrier that adores his human named Katie (Ellie Kemper), both occupying a Manhattan apartment. In many ways it is the idealized life of a single human and her dog, but every day she leaves for work and Max is always crushed by this event. Thankfully, he is comforted by his pals all over the apartment complex that visit him while she is away. There’s the fat and sassy tabby cat named Chloe (Lake Bell), the easily distracted pug named Mel (Bobby Moynihan), and a smooth and easy going dachshund named Buddy (Hannibal Burress). There’s a few other pals as well, most notably the aforementioned Gidget, the love interest across the street that Max is friendly with but ignorant of her feelings.

Katie’s love and singular devotion that an only child would recognize is all Max has ever known, but his world is shattered when Katie brings home a new dog, the large and reckless Newfoundland named Duke (Eric Stonestreet). If you are picking up the Toy Story formula by now you will be able to predict that Duke and Max are immediately at odds with each other. They even get lost trying to one-up each other while being walked by a local caretaker and stumble upon trouble with a slew of rejected pets.

It’s here where the elements that are the life of the film come into focus. Gidget comes back into play because she realizes that when the other dogs show up after their walk without Max that something is wrong. She immediately springs into action and one starts to understand that every moment spent with Slate as the adorable dog is a moment worth cherishing. She is a go-getter and relentless but isn’t afraid of getting her hands dirty despite her looks. We are soon introduced to the secret lair of the Flushed Pets, a gang of animals that take immense pleasure in breaking up the lives of the humans that have abandoned them. It could be a sad, moving sequence but instead it is played for laughs and comes out the other side just as well. Snowball wants to initiate the duo and get them on board and the two immediately start trying to figure out a way to escape.

Once these aspects are introduced, and the film is allowed to slightly break away from its Pixar inspiration as it embraces the weirdness of it all, it starts to shine a bit more. Gidget befriends Tiberius (Mel Brooks), a predatory bird that is overly honest, and even get accompanied by a disabled, scooter-bound basset hound that shows them the way around the city. Yes, a basset hound leads them around the entire city while his hindlegs are elevated on wheels. It’s inventive and has a welcome Looney Tunes-esque flair. Add in an LSD-like trip into a sausage factory that finds the sausages singing “We Go Together” from Grease as the dogs gorge themselves, one wishes the overall structure embraced this absurdity more.

It’s quite easy to see Illumination’s latest animation as another Pixar rip-off. I’ve given you plenty of ammunition to make the obvious connections and there’s even more in the film. Despite adhering to this tried-and-true formula, there’s enough laughs and adventure that kids will be entertained and parents may even enjoy themselves, too.

The Secret Life of Pets is now in theaters nationwide.