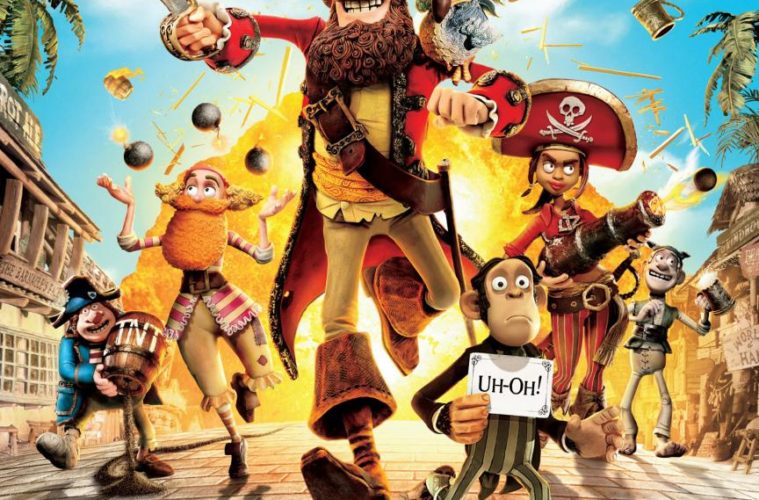 [Review] The Pirates! Band Of Misfits

It’s hard to believe that it has been seven years since Aardman Animations delivered the delightful stop-motion feature Wallace & Gromit: The Curse of the Were-Rabbit. Their long-awaited return to the field, under the direction of Peter Lord, is ultimately a disappointing experience that leaves one thoroughly underwhelmed. With such potential, it is a great shame that this film lacks the life and soul one might expect from this team.

The story centers on the aptly-named Pirate Captain (Hugh Grant), who is desperate to win the coveted Pirate of the Year award. However, his peers outshine him greatly, and he is the laughing stock of the pirating community. Nevertheless, he remains determined, and sets off to sail the seas with his loyal crew looking for loot.

After several disappointments, he comes across a ship inhabited by none other than Charles Darwin (David Tennant). Darwin becomes fascinated by the Pirate Captain’s plump parrot, Polly, who in fact turns out to be a dodo, and they travel to London to present the bird in completion. From here, the film consistently deteriorates, never attempting to avoid clichés and always remaining completely predictable. The addition of Queen Victoria (Imelda Staunton) is rather embarrassing, along with the many purposeful anachronisms, such as the inappropriate soundtrack.

Although the story is woefully disappointing, as expected the visuals are the film’s strongest element. The painstaking detail with which they have been created is clear. The bustling pirate town on Blood Island and the recreation of Victorian London provide particularly sumptuous visuals, as the stop-motion animation works to great effect. It’s a pity these technically-stunning settings are a mere pretty backdrop for the lackluster plot.

There are many talented voice actors in the supporting cast, from Brendan Gleeson to Martin Freeman to Salma Hayek. But none of them are given enough lines, their roles little more than extended cameos. The only character one gets to know is our lead Pirate Captain, and despite the charming affability that Grant plays him with, it would have been nice to get to know his crew too.

There are a few witty one-liners, showing the potential it never fully reaches, but the majority of the jokes remain obvious and unfunny. Even though it’s not attempting to be side-splittingly hilarious, it even fails to retain a warm-hearted amiability that would perhaps have negated some of the flaws. While there are wonderful moments in the details, the set pieces fail to hold one’s attention and simply don’t excite as a pirate adventure should.

Coming from the distinguished Aardman Animations, one might expect something with some genuine soul here, but that is exactly what it lacks. For all the film’s visual splendour, the story is too barebones to get invested in, even considering the short running time. While making sure every minute detail in the stop-motion is perfect, the same amount of care to the journey could have gone a long way.

The Pirates! Band Of Misfits is currently in release in the UK, and will hit US theaters on April 27th.