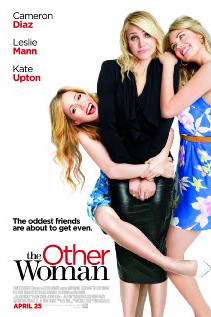 [Review] The Other Woman

The Other Woman is one of those lame comedies that pretends allegiance to the female demographic but spends most of its time toiling around in sub-moronic, playground-level sexual politics. Ladies might momentarily connect with the cheeky camaraderie of Cameron Diaz and Leslie Mann as two women scorned by the same man, and their dates may feel compelled by the improbably buoyant Kate Upton, but everyone’s going to cringe when the plot-driving laxatives show up.

Of course it’s going to take a bit more than a little X-lax to get this movie’s head out of its butt, and director Nick Cassavetes fails to provide that extra comedic oomph. Written by Melissa Stack and helmed by Cassavetes, The Other Woman starts out as a modern face-lift for those girl-power revenge flicks of the 80’s and 90’s, movies like 9 t0 5 and The First Wives Club. The star power has changed of course, and in the obligatory Julia Roberts role you’ve got Cameron Diaz as a New York lawyer who’s gone gooey for the deceitful Mark (Nikolaj Coster-Wadau), who’s already got a clueless wife at home in the form of Diane Keaton stand-in Leslie Mann.

When both women realize the extent of Mark’s mutual betrayal, they stalk him and discover still another mistress, Kate Upton, filling out a bikini that would have been worn by Pamela Anderson back in the day. Just as Mann, Diaz and Upton come together to get sitcom-level revenge on the unsuspecting Mark, the movie sinks down into one turgid, tacky set piece after another, all of them connected by painfully on-the-nose musical montages. Coster-Wadau endures a series of unfunny and unimaginative attacks upon his person and masculinity, but the way the script handles his eventual unraveling makes that entire endeavor seem pointless and wrong-headed. What’s the point here exactly? That if you’re a manipulative, value-less cad who uses women, you can expect them to spend every waking hour thinking about you and scheming?

Ultimately, that’s the biggest problem with The Other Woman as a comedy and as a female empowerment vehicle; we don’t buy that any of them would remain infatuated with this heel long enough to jab him with their high-heels let alone use up precious time and energy ruining his entire life. Diaz has good fun with Carly and her smart-chick persona that should have seen this coming, but once she’s the ringleader of the outfit, her attempts at snapping Mann’s Kate out of her funk are always more interesting than the two-bit vengeance scenario.

The same is true of Mann, who’s adding bits of raunchy, dizzy nuance to her Apatow persona—she’s still got a thing for bold, brash bathroom habits—and lugging around a scene-stealing Great Dane in hopes of doubling the chances of something funny happening onscreen. A little of Mann’s disheveled and freshly disillusioned Kate goes a long way, but she’s the only actress in the picture who achieves a plausible emotional reality within the confines of the situation. Upton has been brought in almost exclusively as the eye candy and her character is insultingly written as nothing more than the busty, dumb blonde. She adds a sense of naïve cheer to the film that’s missing but this role is pure stereotypical character mush. The Other Woman feels like it was assembled by writing ideas on Post-Its and then throwing darts to see which ones got to stay, while Cassavetes’ direction is like the sparse tacky glue that holds the Post-Its in the pack, employing every generic rom-com technique he’s picked up over the years. The romantic subplot involving Carly and Taylor Kinney as Kate’s brother has been so carelessly jammed into the film that it doesn’t get a chance to generate much charm.

The one intriguing concept that the rest of Woman revolves around is that moment where the scorned lawyer realizes she’s been had, and strangely enough, finds a measure of sisterhood with the wife of her deceiver. The better story is right there, in what Diaz and Mann do in the days after they get over Mark. These women would have confronted him, asserted themselves and caught the first train out for a more interesting movie.

The Other Woman is now playing in wide release.