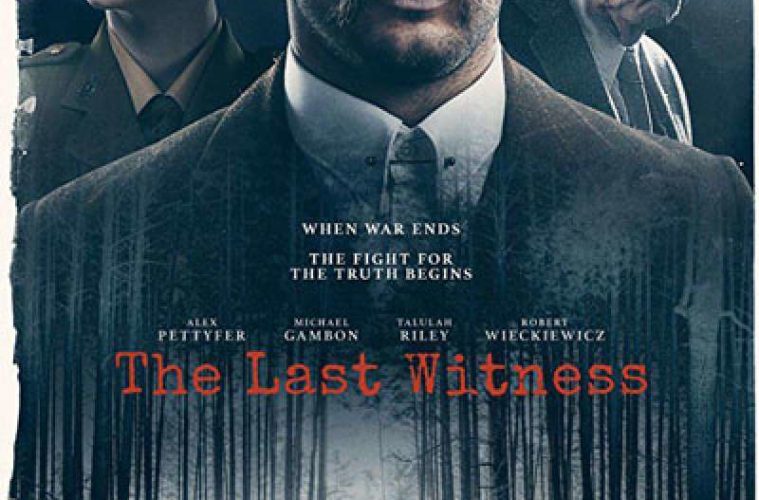 Review: ‘The Last Witness’ is a Predictable Post-WWII Drama

Soviet secret police began a series of mass executions circa 1940 of Polish citizens they knew would reject foreign occupation upon WWII’s completion. Some of the resulting graves were discovered in the Katyn Forest three years later with more found elsewhere totaling 22,000 bodies. Because of the diplomatic relations necessary to join the Allied nations with the “enemy-of-my-enemy” USSR, official word on the Katyn massacre stated Nazi Germany was to blame. This lie was crafted with obvious intentions: America and Britain needed to placate Joseph Stalin and the Soviets needed Poland to retain a modicum of good will towards their new rulers by manufacturing a worse villain. Writer/director Piotr Szkopiak’s grandfather was one of the innocents murdered and The Last Witness is his way of honoring their memory.

He and co-writer Paul Szambowski have built their historical fiction as a means of exposing the horrific lengths all these different governments would have taken to keep the truth hidden. It surrounds journalist Stephen Underwood (Alex Pettyfer), a man introduced as too new to be respected or too headstrong to be given any leeway whatsoever as far as tackling hard-hitting stories. So when he approaches his editor (Michael Gambon’s Frank Hamilton) about a rash of Polish veteran suicides he believes to be a door onto a more nefarious conspiracy, the old man assigns a cider festival instead. Being the brother of a British Captain (Gwilym Lee’s John) and boyfriend of a well-placed lieutenant (Talulah Riley’s Jeanette), however, Underwood decides to kick some tires and see what falls off.

The result is Michael Loboda (Robert Wieckiewicz), an ill-tempered man with a secret believed to threaten his life. Underwood pitches that he can be a conduit for the truth, a trustworthy third party able to facilitate the means for his safety through a story worthy of international intrigue. What he doesn’t realize, however, is that people are watching. The closer he gets to Loboda, the more paranoid everyone becomes. Suddenly the whereabouts of this stranger are unknown, Polish Colonel Pietrowski (Will Thorp) rescinds his air of familiarity for a coldness and aloofness towards Underwood, and British Intelligence (Henry Lloyd-Hughes’ Mason Mitchell) starts to inquire about the players involved in what’s become a circuitous cycle of vagaries and assumptions. It soon appears everyone is involved in a vast cover-up.

Who can be trusted? Who’s in a position to assist Underwood? And who has the means to put into motion a series of events unafraid of silencing all those along their path? These are the questions The Last Witness asks as Underwood continuously plays with fire. But just as Loboda worries about so much out of fear, Underwood doesn’t worry enough. Because he’s initially only on the fringes of this conspiracy and therefore left to his own devices to fill in the blanks as far as details and players, his curiosity constantly usurps his caution. This quest for answers ultimately risks the lives of anyone he has ever been in contact with because his opponents will stop at nothing to ensure their version of the truth remains intact.

The identity of those opponents isn’t difficult to decipher, but I’m not entirely sure Szkopiak was trying to make it otherwise. His and Szambowski’s story is rather obvious in its progressions, each step forward less a surprise as far as the plot is concerned and more another turn of the wheel gradually squeezing Underwood into submission. They reveal Loboda’s truth early to vindicate the journalist’s gut instinct before transitioning the latter into the former’s shoes so the suspense can move from an outsider’s perspective onto an insider. We eventually find that we have a pretty good handle on who could steel themselves towards murder and who couldn’t, watching the chips fall in the only sequence we would accept. It may not be exciting, but it does make sense.

It’s therefore on the viewer to decide whether that’s good enough. I’m sure it will for some, but I couldn’t help feeling at arm’s length throughout. Rather than get caught in the mystery, I found myself waiting for the next revelation as a matter of certainty. I didn’t care who survived and who didn’t because I was only in it to discover how things shook out, not to pull for one over the other. To me they were all expendable in relation to the truth — whether it got exposed or suppressed. It doesn’t help that Pettyfer always stares blankly and a bit off-kilter as though drunk. This might be intentional since his character has a penchant for alcohol, but it never overtly impairs judgment or action to be relevant. Instead it starts defining him, overshadowing what should be confidence and strength by causing us to laugh when he forcibly stops someone to look them in the eye and not gasp. And the way he consistently gets into trouble despite finding what should be clear evidence he’s being followed only makes us realize he’s as bad a reporter as amateur sleuth. There’s sadly also zero chemistry between he and Riley, a fact that kept me skeptical about her motives — but as distraction rather than potential complexity. Unfortunately any desire for duplicity is a by-product of certain characters being too perfectly attuned to their specific trajectories. I had hoped this meant the filmmakers were tipping their hats to surprises instead of simply keeping everything on their cemented paths forward.

But that’s what’s happening. We’re watching pieces move along ready-made tracks to their respective destinations. As far as giving shape to the Katyn massacre cover-up and the countless others silenced in its wake for trying to set the history books straight, though, it works. Szkopiak does honor the dead with his story, but it never quite captivates as more than a serviceable reenactment of oppressive powers putting country and economy above human life. His familial connection to the tragedy should render it personal and yet it doesn’t transcend Underwood’s narrative journey to project the raw emotions of its inherent horror. Wieckiewicz tries his best to do so in limited screen time, but he’s not leading this specific tale. I wonder how much better the whole would be if he were.