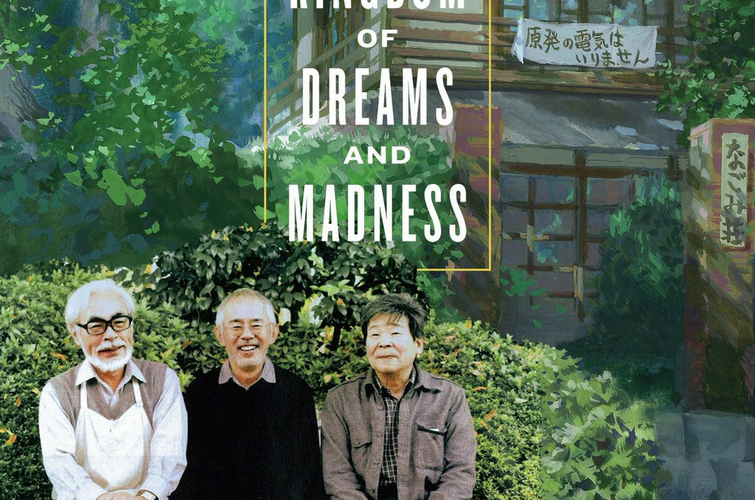 [Review] The Kingdom of Dreams and Madness

The fate of Studio Ghibli has remained uncertain since its co-founder Hayao Miyazaki announced his retirement last August. Since then, rumors have swirled, with reports claiming that the Japanese animation giant will keep going, while others, including statements from Miyazaki himself, appear more skeptical. But when Mami Sunada first stepped inside Ghibli in the spring of 2012, the studio was very much alive and in the process of creating more of its signature hand-drawn work.

Sunada’s documentary The Kingdom of Dreams and Madness follows the parallel productions of Miyazaki’s The Wind Rises and his partner Isao Takahata‘s The Tale of the Princess Kayuga, two films that would punctuate the end of an era, along with the forthcoming When Marnie Was There. Archival images and footage, interviews, and comprehensive montages provide a rare, and possibly final look at the studio’s history, and its legacy as the creative force behind some of cinema’s most spectacular animated features, including My Neighbor Totoro, Grave of the Fireflies, and Princess Mononoke. The film focuses mainly on Miyazaki, the beloved, grandfatherly face of Ghibli who spends much of his screen time contemplating over cigarettes and laughing at his own impatient musings. “Why must I keep drawing when I’m past 70?” he asks as he diligently renders storyboards for one of his most personal, and conflicted works. Where Takahata remains a reclusive, largely unseen figure holed away in a separate facility, the talkative Miyazaki welcomes and befriends the camera, offering it his many views on life and career with a wide smile. Even while he professes dissatisfaction with filmmaking, saying at one point that it only brings “suffering,” his moments of apparent excitement say otherwise, especially when he reacts to the idea of hiring Ghibli alum Hideaki Anno (Neon Genesis Evangelion) to do voice work.

Despite his protests, Miyazaki’s motivation for making The Wind Rises soon becomes abundantly clear – as he delves further into his passion project, which dramatizes the real-life struggles of WWII Japanese fighter plane designer Jiro Horikoshi, he openly grapples with the contradiction between his own anti-war beliefs and his love of military aircraft, as well as the lingering issues with his father, a man who became rich selling wartime airplane parts. Helping Miyazaki along the way is his “right-hand woman” and production manager, Sankichi, his long-time producer, Toshio Suzuki, and his cadre of loyal animators, each of whom play a role in making their director’s deeply personal vision a reality. Their hard work and efficiency makes for a bittersweet triumph, as the film’s completion not only leads to another Ghibli masterpiece, but an end to their close-knit family.

The Kingdom of Dreams and Madness does the world a service by chronicling and preserving, in a most charming and understated way, Miyazaki-era Ghibli and the human element beneath its creative genius. The film’s non-cynical depiction of its subjects also stands as a testament to the artistic spirit and the complex and fragile, yet ultimately worthwhile journey into its pursuits.

The Kingdom of Dreams and Madness is now in limited release. See the trailer here.