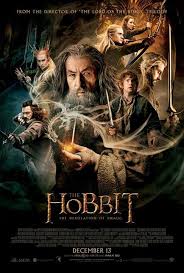 [Review] The Hobbit: The Desolation of Smaug

“You’re a very fine person, Mr. Baggins, and I’m quite fond of you. But you are really just a little fellow, in a wide world after all.”

When wise but grumpy Gandalf the Grey speaks those words to the titular Hobbit at the end of Tolkien’s story, he means them as a kind-hearted, kidding admonishment. In The Hobbit: The Desolation of Smaug, Peter Jackson’s second, rambling installment of Tolkien’s gentle, slender novel, the statement proves surprisingly literal; stuffed none too comfortably into the sidelines of his own adventure, Martin Freeman’s Bilbo plays second fiddle to Thorin, the dwarves, Gandalf, even Legolas and his Elven lady friend Tauriel. If the first film was a shambling, oddly paced introduction to Bilbo’s efforts to help his dwarven companions return to Erebor, Desolation nearly leaves this “little fellow” behind altogether, spinning a tale of Middle Earth evolving to the state we find it at the opening of Fellowship of the Rings.

As true Tolkien fans will likely realize soon after the opening scene—that documents Gandalf encouraging Thorin over drinks at The Prancing Pony—this, more than any of the other adaptations, is mostly Peter Jackson, and significantly less of the beloved source material. The good news is that in every other respect, The Desolation of Smaug is an improvement over the meandering first chapter, and on its own merits proves to be a nimble, rollicking bit of fantasy escapism that harkens back even further than the first Rings trilogy, all the way to the likes of Ray Harryhausen’s The Seventh Voyage of Sinbad. We’ve reached the point of no return for a tackling of The Hobbit that could compare to the The Lord of the Rings saga, but it’s likely that true fantasy aficionados will be having too much fun to be really bummed about it. What works in Desolation’s favor is that it’s essentially all middle chapter, playing with the breathless confidence of a really good serial saga and ending on a cliffhanger that retains the momentum all the way to your walk out of the theater. Both Hobbit movies, without the benefit of Bilbo’s personal viewpoint, have come down to a series of set pieces, padded out with character drama pulled from Tolkien’s appendices. The natural shape of the narrative is missing in both instances, but instead of formlessly plodding through the detailed universe the production designers and technicians lovingly created, Jackson changes course this time and embraces a dynamic sense of escalating adventure.

From the tangly, deformed slopes of Mirkwood forest—complete with icky spider armies—to the icy frost of a colonial lake-town called Dale, and down into the shadowy treasure halls of foreboding, dragon-infested Erebor, Jackson and his co-writers push their heroes forward with evolving trajectories that include greed, self-confidence, and burgeoning global awareness. We may see less of Bilbo’s internal journey, but the dwarves are much improved as catalysts in their own story, and the elves—added here to make the action scenes a little more spry and complex—work in representing Tolkien’s milieu of competing agendas and perceptions. Gandalf spends less time with Thorin’s company this go-round, but instead of leaving a wizard-sized hole in the film, he’s sent off on an on-screen quest to uncover the true nature of the mysterious Necromancer; an agenda with an obvious outcome, to be sure. Richard Armitage continues to do fine work as the defiant Thorin, here subtly suggesting the emotional migration from stubborn survivalist to bitter, entitled ruler, while his dwarves learn more about this world on their single-minded quest than they did during their long exile from the homeland. Freeman embodies a similar transformation with less fanfare, and while his scenes may be noticeably underwritten—“I shall call you Sting” is reduced to a throw-away sound bite—the actor continues to unlock compartments of the hobbit that neither he nor his compatriots have yet seen. The Ring now beginning to have a shaping effect on his attitude and personality, Bilbo is a much different halfling than the one we met cozied up in Bag End last go-round. His best scenes are the ones that lift up and celebrate his journey and the freedom it’s provided his sense of character; one is a serene and tranquil bit of beauty above the treetops of Mirkwood and the other, his dread palaver with the dragon Smaug, a near perfect evocation of the book’s imaginative confrontation.

Smaug is the best of the new characters and his presence marks the arrival of cinema’s greatest screen dragon, aided by the digitally lowered tones of Benedict Cumberbatch and visually realized with nuances so stunning, that we can literally see the fire lighting in his furnace-like gut and shining out between the brief chinks in the armored hide. Smaug, the chiefest of calamities, isn’t alone in the colorful villain department. Sure, a few more ugly orcs show up to join that CGI snoozefest, Azog the Defiler, but I’m talking about a less intrusive and seemingly more benign threat; the pompous, portly and preening Master of Laketown, played to the doltish hilt by Stephen Fry.

In Fry, the film gets a breath of fresh air and a character not driven by prophecy or duty or mysticism, but rather by the immediacy of his own machinations and plans. It has always been the men of the Rings films that proved most interesting, because they retained the aura of freewill that never seemed to much encumber the elves, dwarves or wizards. The hobbits, gentle folk in their own right, were burdened with un-shirkable tasks from the get-go and so too, weren’t allowed versatility in that department. Fry’s Master and Luke Evans’ Bard, a philanthropic bargeman of Dale’s destitute province, represent the most relatable and refreshing presences in Desolation of Smaug. They alone seem to stand outside the plot and behave as characters whose next movement may not be immediately guessed.  To a degree, Evangeline Lily’s lovely she-elf Tauriel inherits a bit of this dynamism, although it’s not her unearthly Elvish poise that grounds her individuality, but the half-hearted, interracial love triangle brewing between she, pretty-boy dwarf Kili, and Legolas. Alas, Orlando Bloom’s Legolas only has time for a few raised eyebrows and leering stares because he’s participating in many of the film’s massive action scenes. It’s in those action set pieces and in the overall visual verve of this created universe that Jackson excels and if he’s left behind some of the more artistic, poignant grace notes of the first saga, he’s also connected back to his indie splatter roots with a bit of a vengeance.

Ravaged carcasses, flying orc heads, twitching, decapitated bodies and a general sense of the gruesome are pervasive in this chapter, as is a reckless sense of imaginative whimsy. We aren’t ever in fear for our characters lives, but that doesn’t actually lessen the impact of the creatures and challenges that populate this universe. By distancing himself just a bit further from Tolkien’s tonal understanding of his Middle Earth, Jackson has  freed himself up to explore his own visions and interpretations. Gone is much of the pompous self importance, replaced by a heedless sense of joy that is often infectious, even when Jackson threatens to lose the structural integrity of the enterprise.

Some will embrace these changes, and the increased entertainment they bring, while others may feel just a bit further off from the shore of their cherished memories and lost in the wild of Jackson’s version. I was caught up in the spectacle, and enjoyed this Hobbit installment as a reminder of the spirit of Tolkien’s work that I encountered as a kid. Take that ridiculous, gravity and logic defying trip down the rapids in the barrels for example, with orcs and elves clamoring about in fights that would simultaneously be the envy of Errol Flynn and Jackie Chan. In a now distant past, I was guilty of doodling similarly grand and ridiculous escapades into the margins of my math homework. Doodling here across the canvas of a multi-million-dollar franchise, Peter Jackson and his team have captured some of that same exuberance and it’s addictive.

Yes, this is evolution in the right direction, but now it’s time to take that energy and give us a final chapter that will move and inspire as well as dazzle.

The Hobbit: The Desolation of Smaug hits theaters on Friday, December 13th.