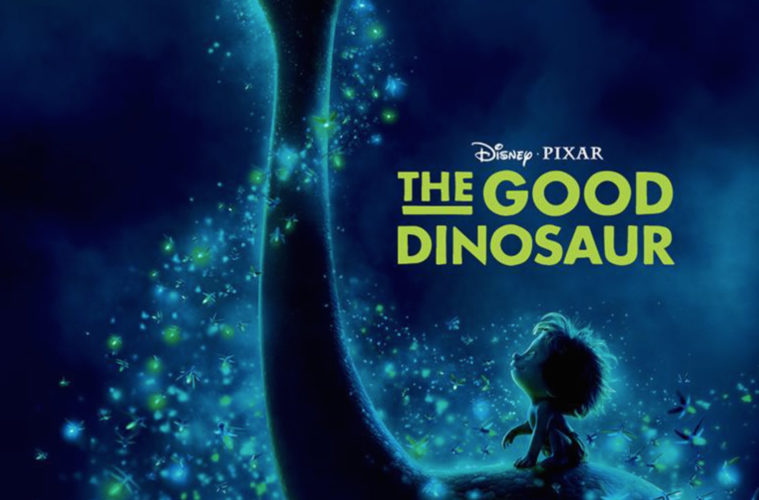 It is a shame that The Good Dinosaur should have to be released so shortly after this year’s other Pixar film, Inside Out. Following in the wake of the earlier film, which was an endlessly imaginative analogy for the emotional and psychological development of a young girl, it is hard for any film from any studio to feel like anything more than a tired retread of familiar ideas. The story of Joy, Sadness, and Riley was so stuffed with inventiveness and novelty with gloriously rendered and conceived avatars of abstract concepts that it defied belief. Inside Out was a clear classic, a bold exercise in filmmaking that showed us what exactly animation can do that no other medium could hope to accomplish.

The Good Dinosaur, on the other hand, is a simpler, more literal story that plays like a cross between Finding Nemo and a Jack London story but with the protagonist being supplied by The Land Before Time. It lacks the narrative inventiveness or thematic richness of Inside Out, and thus could be accused of being a step back for the studio. This reading, however, does a disservice to the craft and aims of The Good Dinosaur — a deeply affecting and impossibly beautiful film that is steeped in genuine emotion, colorful characters, and a moving moral message.

Beginning at what should be the ending, the film tells the story of Arlo (Raymond Ochoa), the youngest sibling in an Apatosaurus family in a world where the asteroid that killed the dinosaurs missed the planet. Millions of years past their intended expiration date, dinosaurs have begun to build an agrarian society. Arlo’s family farms corn, while a family of T. Rexes herd cattle. While his older brother and sister easily earn their parents’ approval, Arlo, a runt with a crippling fear of everything, struggles to find favor with his endlessly capable father. When tragedy strikes, Arlo’s phobias reach a peak, and his wild emotional swings from anger to sadness to paralyzing fear are easily recognizable as a form of dinosaur post-traumatic stress disorder (PTSD).

After perusing a critter that has been stealing  crops into the river, Arlo is swept downstream with only the mangy pest as a companion and confederate. The “twist” here is that the animal who becomes Arlo’s friend is a small human boy (Jack Bright), feral to the point of being canine. It is a simple diverting of a well-worn story, and the novelty of the arrangement is enough to keep the story going until the more emotional turns of the narrative can find their moment to land. The scenes of Arlo and his human companion, soon named Spot, finding their common ground and building a mutually loving companionship are incredibly effective at plucking the heartstrings. Slightly less subtle, but no less effective, is examining the ways in which Arlo’s interactions with — and stewardship over — the safety of Spot aids him in overcoming his PTSD.

The story follows the two as they build a partnership, run into a surprisingly small cast of side characters, and try to make their way back to Arlo’s farm. Along the way we are treated to mind-bogglingly picturesque and convincingly photorealistic environments, with the water effects being of particular note. It is a bit strange, at first, to watch two cartoonish characters interact within a landscape filled with such faithful recreations of light, weather, terrain, and even other animals, but the uncanny feeling subsides as the emotional reality of the characters takes hold.

With such richly detailed protagonists and visuals, it’s a shame that the side characters should be given such short shrift. An early encounter with an equally frightened Styracosaurus (voiced by director Peter Sohn) is so quick and yet so hilarious that it begs for the characters return, but no such revisiting is ever delivered. The animation of and concept of cowboy T. Rexes (one voiced by Sam Elliott, no less) is so pitch perfect that their finite place in the narrative feels equally misjudged. To create a world with such fun (though somewhat underdeveloped) characters only to end the movie with all of them still separate with no signs of ever meeting again is a deep shame. Arlo grows and experiences so much that by the end of the film the thought of him returning to a simple existence on a farm seems counterproductive.

All that being said, The Good Dinosaur is still a delightfully diverting ride. It is far less dense thematically and narratively than the best of the best Pixar films, but its simplicity suits the nature survival tale it tells. Most surprising and perhaps most respectably this is a film that tangles with some genuinely dark themes and moments without flinching away. These are still dinosaurs, after all, and even though some have embraced a gentler life, others cling to their feral roots. In a story about handling fear, though, this shocking admittance of violence in the heart of nature reads as the film playing it straight. You can’t tell a kid about the nobility of facing up to fear without allowing for a little honest danger to slip through the sunny façade.

The Good Dinosaur may not achieve the abstract brilliance of Inside Out and Wall*E or the cleverness of The Incredibles and Ratatouille, but it isn’t really trying to, and judged by the metric of its own ambition, it stands as a slight but delightfully moving and visually spectacular adventure yarn.