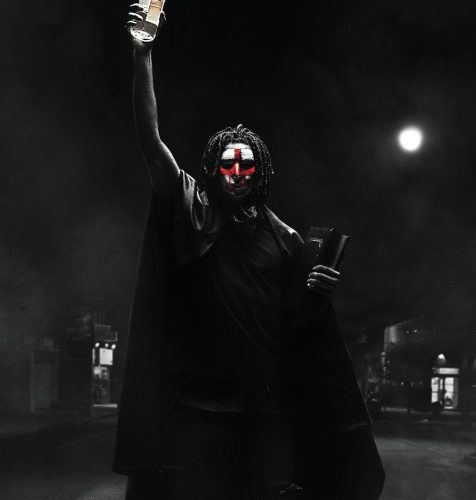 Review: ‘The First Purge’ Shows the Origins of a Timely Resistance

There’s a brief loss of picture halfway through The First Purge‘s end credits that reveals a full-blown commercial for the upcoming ten-part television “event” based on its own franchise. It’s a bad look, especially for those already wondering if James DeMonaco cashed-in after writing and directing the first three installments of his surprisingly potent and prescient series before handing the reins to Gerard McMurray. He deftly balanced sci-fi horror thrills against the propulsive force of sound political commentary throughout his self-made trilogy and capped everything off with a resonant and believable (if optimistic) conclusion. Should he have left it there? Did box office success take the decision from his hands? Maybe. This prequel therefore begs the question: does DeMonaco have more to say or more to gain?

If I had known about that in-credits commercial beforehand it would have definitely colored my opinion because it’s not the film’s only example of blatant promotion (a teaser poster for Universal’s forthcoming Halloween sequel hangs prominently on the wall of a character’s room). Why? Because this series strives to provide a look at the merits of a long-dwindling sense of humanity that just barely remains amongst the impoverished and oppressed: mainly black and brown minorities here. It shows the power of community and survival against a one-percent hell-bent on destroying them under the pretenses of false rhetoric spinning their demise as self-inflicted. To then wield capitalistic tricks that devalue this audience into captivated consumers — statistics — just like the New Founding Fathers is at best misguided and at worst reprehensible. This is a truth that cannot be ignored whether you ultimately like the finished product or not. It’s also one I don’t believe existed in the previous installments due to their roads always devoting time and attention to an unknown path forward. Prequels don’t have that luxury since the result is predetermined. They exist to fill in the blanks, often proving hollow while going through the motions in lieu of creating with spontaneity. The only reason I’m willing to give DeMonaco and company a pass is because of what this franchise has lived through. What was a fantasy in 2013 saw sweeping gains by an ever-emboldened Republican party in 2014 before watching greedy, self-serving autocrats like the NFFA receive the keys to the castle via 2016’s Trump victory.

Suddenly DeMonaco’s entertainment was revealed to be metaphorical premonition (hyperbole or not). As such, The Purge couldn’t remain parable. It needed to brandish its teeth and really drive home the meaning behind its Hollywood exploitation, graphic violence, and darkly humorous sadism. Where the original trilogy’s trajectory moved from an upper middle class family acknowledging that they will be sacrificed for the greater good of an unyielding evangelical aristocracy to a white savior reclaiming his soul to an all-out minority revolution taking the power into their hands, The First Purge had to turn focus away from an awakening group of “innocent” bystanders and place it firmly upon those who knew all too well the tactics used to eradicate them from existence. The origin it provides is of the resistance.

This is the logical progression now that we know everything we do about the future. Rather than show what can happen, the series must portray what is happening. Just as our current administration experiments with concentration camps and domestic military force to target populations it cavalierly labels “animals” as a way to dehumanize the group instead of its outliers (while making sure to position our very real white terrorist problem as an aberration of its own demography’s whole), the NFFA chooses state-sanctioned genocide by way of psychological study. They latch onto Dr. Updale’s (Marisa Tomei) radical, theoretical construct of giving people a mulligan on their rage in hopes the problem solves itself. As most know, however — regardless of prevalent fearmongering — we don’t set fire to our own houses. What we see is a controlled test run quarantined to Staten Island. We watch as NFFA cronies interview and recruit the worst of the worst (why Melonie Diaz is teased as one without ever seeing her again is unknown), promising money if they stay for the soon-to-be coined “purge” and more if they kill. DeMonaco understands the socio-economic impact this event supplies and does his best to write every aspect of it from an intelligent teen seeking a quick fix to his unstable existence (Joivan Wade’s Isaiah) to a gangster with business acumen and a street code to uphold away from the NFFA’s baited trap (Y’lan Noel’s Dmitri) to citizens uncertain about the severity of what’s happening that throw giant parties and quickly learn the stakes.

It’s the latter’s naiveté that shines here because these people haven’t grown jaded after years of close calls with the barrels of a government-paid killing squad’s guns not yet rolling into their town. Complete with overt references to Trump (genital grabbing will forever be his to own), the innocents onscreen who still believe churches and homes provide a safe haven are very much holding a mirror onto us. That Halloween poster dates the events as 2018 and thus makes their tipping point into ours. The First Purge becomes a call to arms so to speak (sometimes to its detriment) — a reminder that we must stand up and for each other at the voting booths and in our communities now so we won’t need Election Year‘s civil war. There can be no mistaking this point, for better or worse. While necessary to wake us from complacency and not belittle the horrors happening throughout our country right now, the whole does find itself laboriously preachy and unsubtle in its motives at times. You might also find it surprising to learn that its $13 million budget is the largest of the series considering how often the CGI blood spurts and NYC landmarks mapped atop Buffalo locales look pretty shoddy. McMurray makes so many cuts away from the action that I really thought the number would be closer to the original’s $3 million, especially with a cast whose second-most recognizable face behind Tomei is the one-scene-and-done Diaz. Thankfully Noel, Wade, and Lex Scott Davis’ Nya prove their worth regardless.

They’re the three wrestling with identity, environment, and whether or not the NFFA is offering something they need. They’re the righteous if sometimes-lost sheep caught in the crossfire of camouflaged wolves and unleashed psychopaths (like Rotimi Paul’s suitably cheesy Skeletor) affixed with live-feed contact lens cameras documenting every gruesome encounter worth commodifying. I would have liked less expository missions conveniently putting them into manageable danger away from deathtraps they had seconds ago inhabited and more badass stairwell fights like Noel’s Dmitri running towards chaos with eyes open, but there’s a lot to unpack and a lot to set-up as far as authentic empathy for the many unwitting victims who look torn straight from today’s headlines. In the end DeMonaco did have more to say. Hopefully we listen.

The First Purge is now in wide release.