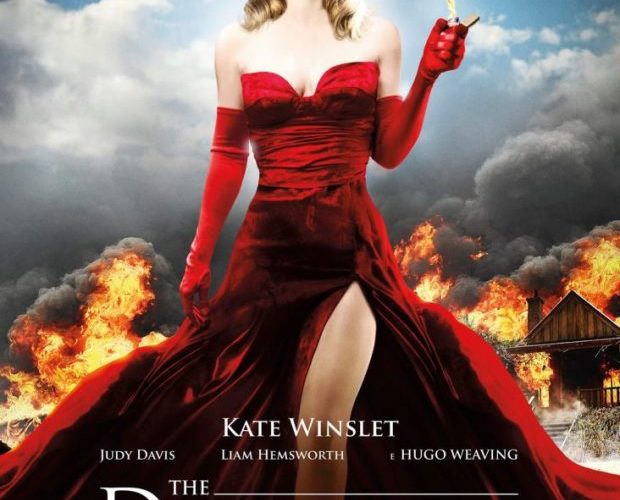 Rosalie Ham’s 2000 novel The Dressmaker is described as “Gothic,” but its new film adaptation more often comes across as a picaresque with too much killjoy drama. It is an odd story, mixing haute couture, small-town gossipry, romance, dark secrets, an old murder mystery, and multiple random deaths. And yet it’s also not nearly odd enough, delivering all of this with a disappointingly straight-laced sensibility. It’s soapy melodrama with the fun dampened by “verisimilitude” – a Marvel-movie treatment for the book-club set.

At least Kate Winslet is having fun as the title character. Then again, one could read Tilly Dunnage’s too-good-for-this-shit attitude toward her awful hometown in the Australian outback as a manifestation of Winslet’s personal disdain. Whatever the case, she wears many astounding dresses and wears them well. The movie’s best scene plays with shifting and conflicting objectification as she purposefully sports a provocative outfit at a public gathering in order to scandalize her town. Self-confidence and how it relates to one’s presentation is a recurring theme — her sartorial prowess is Tilly’s main defense against a place where everyone hates her.

See, most people in the town of Dungatar are convinced that when Tilly was a child, she killed the young son of the town councillor. She was subsequently sent off and made her way to Europe, where she became an expert dressmaker. After 25 years, Tilly’s back to take care of her mentally unstable mother, Molly (a hammy but fun Judy Davis), and facing the simmering resentment of the entire population — save for the friendly, closeted crossdresser local policeman (an also hammy and also fun Hugo Weaving) and the poor but fetchingly Hemsworthy Teddy McSwiney (Liam, not Chris or Luke). In between flirting with Teddy and investigating how that boy died all those years ago, Tilly attempts to make nice with Dungatar’s shrewish masses by decking them out in all the latest and greatest looks. It doesn’t work, because small towns are just the worst, right?

The weird thread* of class disdain makes the otherwise-harmless Dressmaker occasionally off-putting. It’s a snob vs. slobs story on the side of the snob, who is persecuted in a nearly martyr-like fashion**. It’s like Jesus’ musing on how a prophet is honored everywhere except in his own hometown, except the place is going so far as attempting to perform the crucifixion itself. This is a movie for everyone who moved out of their small town but still harbors an unhealthy level of hatred for all who lived there.

Worse is that The Dressmaker has almost no narrative propulsion, lulling about as it cycles through subplots. Tragedies and triumphs alike arrive abruptly, and, once all the mysteries are solved and it’s time to wrap up, the conclusions sort of fall into place on their own rather than through any of Tilly’s own prerogative. The one exception to this makes for a rather spectacular capper on the idea of putting the past behind oneself, and is on a level of ridiculousness I wish the rest of the movie had embraced. If you’re going to hate on the small-minded, then hate them all-out. Half measures are not worthy of Kate Winslet.

The Dressmaker enters a limited release on September 23.