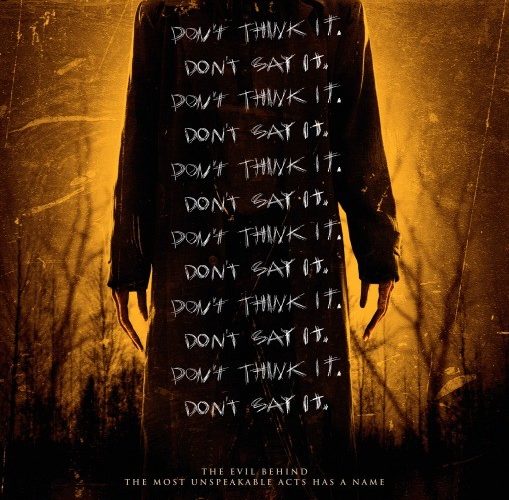 A horror movie slated to open in October means buzz and solid expectations. It used to be you rarely saw the genre at any other time — back before studios discovered how cheap they were to produce and how palatable they were to teens looking for something to do on a Friday night whether it proved enjoyably worthwhile or not. Securing this coveted spot was therefore a win for STX Entertainment and their film The Bye Bye Man, either through hard work or sheer luck. Watching it shift up from October 14th, 2016 to June 3rd may have even been a testament to its success until yet another shuffle to January 13th, 2017. Don’t let the connotations Friday the 13th conjures fool you. The Bye Bye Man was dumped.

Suddenly my cautious optimism evaporated into knowing skepticism as another sub-par riff on the Boogie Man appeared to be making its way onto screens better reserved for anything else. Sometimes this train of thought helps once I find myself sitting down to watch a red-headed step child such as this supernatural tale of monsters just three weeks removed from Santa’s jolly laughter. After all, nothing shines a mediocre work of art in acceptable light like low expectations. Maybe this thing could surprise me. Maybe the intrigue that comes with knowing screenwriter Jonathan Penner adapted it from a non-fiction book (a single chapter from Robert Damon Schneck‘s The President’s Vampire, a supposed recounting of paranormal terror as experienced by a source) meant there was more than meets the eye. Sadly The Bye Bye Man lacks both surprise and intrigue despite possessing some promise via a wild opening from the 1960s starring a bespeckled and shotgun-toting Leigh Whannell. He’s frantic, rambling about a name before mowing down those he told and those they subsequently told. Don’t think it, don’t say it, and silence anyone who might be able to do either so this specter of evil with hellhound in tow won’t arrive to destroy everything you love. Even that sort of scorched earth mentality isn’t foolproof, though. Not when you’re dealing with an entity outside the realm of nature. “He” can open doors, conjure nightmares, and ensure objects bearing his identity will be found again. So a quick fast-forward to present-day can only spell a return to chaos.

Meet Elliot (Douglas Smith), his girlfriend Sasha (Cressida Bonas), and his best bud John (Lucien Laviscount). They’re about to move into a giant house off-campus, one with a ton of furniture collecting dust in the basement. Coins clink, doors slam shut, and an air of fear begins rolling through the rooms. Thankfully one of their housewarming guests is “sensitive” enough to psychic phenomenon to perform a cleansing. Somehow the apparently modest Kim (Jenna Kanell) reveals to everyone that her miniscule “sensitivity” is actually a full-blown case of speaking with the dead to read minds as though that’s a completely different thing. She feels a presence coming, Elliot speaks its name aloud, and nothing will ever be the same as paranoia and anger spark latent jealousies and violent aggression. It’s kind of a cool concept even if its desire to answer the why of every person who’s “snapped” throughout history is way too far-reaching for even the most gullible viewer in the audience. Why we keep catching glimpses of a train numbered 424 coming towards us on a photo-strewn track is never explained, but the effect does at least introduce a potential for mystery. There’s even one neat instance of this train in antique-y black and white animation on John’s phone that could have sent shivers down your spine a la Samara’s well in The Ring. But it doesn’t. It distracts us for a poor attempt at a jump scare and is never revisited. Sorry, Stacy Title, eerie atmosphere only works if it’s relevant beyond window dressing.

But that’s all The Bye Bye Man delivers: empty promises of more happening than a simple descent into madness manifested by jealousy. Perhaps the filmmakers figured their PG-13-targeted audience only knew conflict through failed relationships built on lust, so they doubled-down and made Elliot’s breaking point infidelity rather than a horrible past that took his parents in an accident. There’s an actual reason for this character to fear reality and yet it’s never touched upon except to set-up his love with older brother Virgil (Michael Trucco), a guy who disappears until convenient. So much is set-up without pay-off whether the notion that Elliot and John were more likely to have an affair than Sasha and John or that the Bye Bye Man’s dog eats souls. Even the casting lacks intent when the trio of pretty people devoid of recognition (although Smith was in Big Love amongst other notable roles) are bolstered by the likes of Carrie-Anne Moss and Faye Dunaway — yes, Faye Dunaway — to little effect. Moss plays a detective who buckles under the pressure of her teenage suspect’s grilling rather than the other way around and Dunaway is a link to the past that introduces more flashbacks than accomplishes anything herself. At least Doug Jones is able to do what he does best as the creepy yet plastic Boogie Man lurking in the shadows. The lumbering movements of his lanky arms and legs are always sufficiently off-putting, but even he can’t hide the artifice of the cartoonish dog by his side.

The whole bleeding eyeholes effect in nightmare has been done countless times before (and better), but the idea of seeing what you fear most is solid. You see someone you know as someone else and find yourself falling in line to the puppet master’s carefully laid plans. The filmmakers even create a way to defeat their monster regardless of how simple its faux outside-the-box interpretation of the proceedings proves. Will Elliot have time to wield what he learns? Will the others be alive to find out? Our one certainty is that someone will do something idiotic enough to undermine any victory for unearned, fabricated shock and sequel potential in lieu of intelligent plotting. I literally threw my arms up when it happened and any good will was dissolved.

The Bye Bye Man is now in wide release.