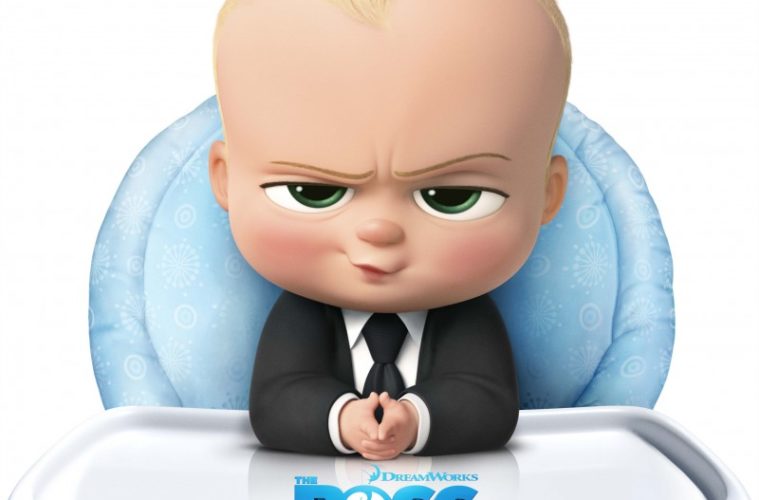 Review: ‘The Boss Baby’ is a Frantic, Absurd Consumer Product

Tim has a healthy, overactive imagination. A C-student who frequently daydreams, his little brother keeps his eye on the prize, managing family expectations while reporting to the head of Baby Corp., an industrial farm in the sky where babies really come from. This is the premise of The Boss Baby, a Saturday-morning cartoon that’s absurdly enjoyable in passages, even if it occasionally feels more like a brand experience than an actual movie. It is colorful and frantic, but still leaves one wanting something more substantive — perhaps a mini-middle manager is a tough sell for the kiddies. Thankfully it never dives into a deep analysis of Six Sigma and other management theories, even if Alec Baldwin’s voice performance as the film’s title character channels his 30 Rock GE executive Jack Donaghy.

Opening with the premise that Baby Corp., a wholesale provider of babies, is losing its market share to Puppy Co.’s new “forever puppy,” The Boss Baby is sent into the field to infiltrate Tim’s family. Seven-year-old Tim (Miles Christopher Bakshi) first experiences love withdrawal as The Boss Baby takes over every facet of family life. He occupies every waking hour of Mom (Lisa Kudrow) and Dad (Jimmy Kimmel), including the family’s traditional bedtime sing-a-long. Still, something is odd about Boss Baby; his suit, his brief case, and his instant ability to walk upright should all raise red flags, although Mom and Dad don’t seem to mind.

The Boss goes about his business until Tim takes an interest, attempting to foil his plan through a secret recording. A group of neighborhood operatives, all delivered to parents of Puppy Co. employees, conspire against Tim in a fun action sequence that should lead someone to call child protection services. Eventually the duo learn the valuable lessons you’d expect from the genre as the film unfolds predictably in a Toy Story-inspired adventure that has Tim and The Boss running off on their own in pursuit of Puppy Co.’s evil boss Francis Francis (Steve Buscemi).

At times a spirited comedy, The Boss Baby unfortunately defaults to standard plotting after introducing its absurd premise. This is seemingly a pre-requisite for studio animations, but if there was more fun to be had, with an attitude, it could’ve been successful. I suppose there’s a delicate balance to be commended here, given its four-quadrant design, but despite a few laughs, high energy pace, and a few recurring gags as Boss Baby morphs into a regular curious baby once his magic formula is taken from him, the bar DreamWorks is aiming for here is far too low.

Those expecting an allegory about the one percent and their middle managers versus the rest of the proletariat ought to look elsewhere. The Boss Baby simply isn’t that, even if Baldwin evokes Glengarry Glen Ross for the hell of it, telling his operative “Cookies are for closers.” Its major flaw lies in Tim, whose character lacks any kind of dramatic texture. Again, it is difficult to be interesting when you’re seven, yet somehow Pixar is always able to pull it off.

Directed by Tom McGrath (Mastermind) and written by Michael McCullers (Baby Momma), The Boss Baby is a run-of-the-mill offering from DreamWorks who have prioritized frantic action and one-liners over the rich complexity of its competition. The irony, of course, is the film is a consumer product about the making of consumer products. There are far worse ways to spend 97 minutes with your kids, but there are certainly more memorable and inspiring cinematic experiences to be had.

The Boss Baby is now in wide release.