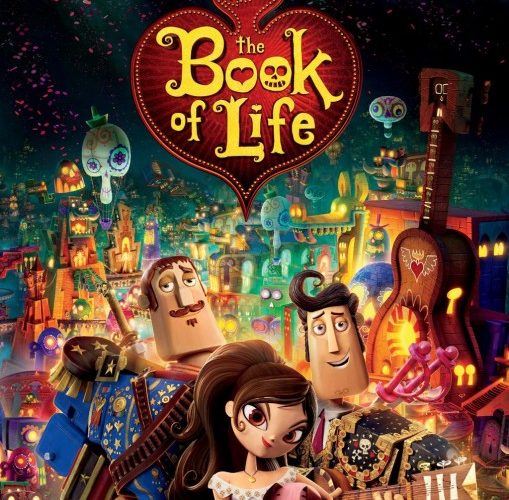 [Review] The Book of Life

When Guillermo Del Toro produces an animated film about traveling into the afterlife and then releases it in time for Halloween, one would be right to expect some family-friendly creepiness. The big surprise, then, is that Del Toro, who cornered the market on nightmares with Pan’s Labyrinth’s Pale Man, has hitched his cart to The Book of Life, a colorful, joyous and buoyant lark that draws more from Mexican tradition and Greek myth than ghoulish Burton-esque kitsch.

Although a thoroughly disposable opening scene suggests that this Book, directed by Jorge R. Gutierrez and created by animation house Reel FX Creative Studios, will be playing in a homogenized, second-hand Pixar style, Del Toro and company have a visual trick up their sleeve resulting in a tasty treat for the audience. When a museum tour guide (Christina Applegate) starts telling a group of school children a story about El Dia de los Muertos (The Day of the Dead), the generic animation is traded up for an abstract, imaginative look played out by 3D wood carvings. Imagine the opening coda of Hellboy: The Golden Army flavored with a distinctly Spanish identity and then stretched to feature length. It takes a few moments to adjust, but the effort is paid off. There are few kid’s films out there that look as beautifully bizarre as this one.

Life’s story is a mythic patchwork that taps into fairly universal and well-worn themes, including family solidarity, personal identity, and the natural role that loss and death plays in life. At its heart, though, this is another boy meets girl story, padded out with two boys—both endearing in their way—and a feisty, confident girl who could easily manage this tale without them. Of course, love intervenes, and sensitive Manolo (Diego Luna), humane fighter of bulls and guitar-playing anachronist (wait ‘til you hear the Latin infused renditions of Creep and If You Think I’m Sexy) finds himself vying with conceited village champion Joaquim (Channing Tatum) for the affections of the luminous spitfire Maria (Zoe Saldana).

Watching this star-crossed affair from a celestial distance, the gods start taking betting odds on which boy will prevail in the heart of the girl. The brooding, sinister Xibalba (Ron Perlman), lord of the faded Land of the Forgotten, and his wife, La Muerta, caretaker of the Land of the Remembered, have each chosen a suitor; Xibalba backs the obvious choice, Joaquin, while Muerta roots for Manolo. These characters, representing the dramatic flair of Mexican mythology, sit above the action, occasionally influencing it in favor of their preferred suitor. In the midst, tragedy seems to strike Maria, prompting Manola to embark upon a journey to the various other-countries of the Afterlife.

The current trend in children’s animated films is to keep things simple and flat, trotting out predictable characters and pop culture tidbits and keeping audience intention on a fairly routine trajectory. Dreamworks, Pixar and Laika have been known to disrupt this from time to time, and now, Book of Life tries to throw some of its own vibrancy and uncertainty into well-worn tropes. The story has been distinctly crafted, and it treats its own rich universe and cultural intricacies with respect and attention, giving audiences a world to explore that feels both fresh and familiar. The central trio of characters is memorable and likable, and the adventure that Manolo sets off on is legitimately compelling. While most of the plotting works, the scripted dialogue isn’t nearly as fresh, and although there’s been a very pointed attempt to connect the less recognizably mainstream elements of the film with a cornucopia of pop culture signposts, this practice actually dulls the movie and makes it less appealing. A cute pig sidekick generates laughs and fits within the cockeyed tableau on display, but other pandering, like Ice Cube’s rapping spirit guardian at the Cave of Souls, seems stale and out of place. This isn’t a deal breaker for The Book of Life, but it routes the film away from the more ambitious thematic well it keeps wandering near.

You can spot the clever references to other obscure kid films that Del Toro himself obviously remembers. In the Book of Life’s adoration of the Day of the Dead and it’s sweeping yet life-affirming scope, it invokes Ray Bradbury’s The Halloween Tree (another trip for a lost soul that found life’s meaning in death) and the candy-coated kaleidoscopic layers of The Land of the Remembered bear similarity to the little-seen Spanish animation, Nocturna, which also envisioned a realm of shadow as a veritable wonderland of self-actualization and character-building. Even that little pork-pie conjures memory of the psychic pig Henwen from Disney’s The Black Cauldron.

Parents who might think of shying away from Book of Life because of its fixation on the afterlife needn’t fear too much edge here. Small children probably shouldn’t attend, but the emphasis here isn’t on the scary or the morbid. In fact, much of Book of Life’s more routine passages and faults can be overlooked because of the care and positivity it heaps on its vision of the world beyond death. The world we live in, no matter how much care to think otherwise, will always be formed, influenced—and sometimes, yes, haunted—by those who have since passed on. Beyond the borders of this enjoyably sincere little ditty, is the realization that the Land of the Remembered is always a part of the land of the here and now.

The Book of Life is now playing in wide release.