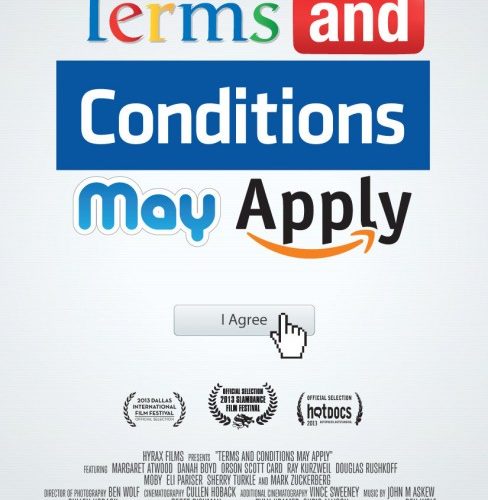 In 2009, Ondi Timoner (briefly interviewed in Terms and Conditions) chronicled an art project turned quasi-cult in her remarkable account of Josh Harris’ Quiet experiment, We Live in Public. In essence, an internet billionaire provided food, housing, shelter and drugs to a community of 100 “artist collaborators” living communal in pods. Everything was free except their image and data; Harris owned that. Cullen Hoback’s Terms and Conditions May Apply — finished before the current Edward Snowden affair — is another important look at privacy and transparency in the digital age.

Cut to Google, which we all use. They know more about us than perhaps we know about ourselves, our fears, desires, whom our friends are, what we buy and so forth. Listeners of NPR’s On The Media will already know many of the answers to the questions Hoback asks and investigates, but any film that shines light on subjects this shadowy is worth making. Still, there needs to be a way to monetize the content we produce — again, like Quiet, we give up something (an estimate used in this film pins the number at around $300 worth of data provided to Google annually) for this international knowledge database. Terms and Conditions May Apply looks exactly at what we accept and at the relationships Google and Facebook have with law enforcement. Data has been used in the UK, and even in the US, to stop crimes from happening while also shutting down protests in the planning phase. The limits to free speech are aren’t entirely transparent and the government players including local police organizations can (and are_ playing fast and loose with civil liberties.

In essence, this is more extreme than Quiet; as interviewee Moby says, “anything that has been digitized is not private, and that’s terrifying.” Much of this data, collected by third parties, becomes fair game due to the Third Party Doctrine – fostering strange bedfellows as the FBI’s Robert Mueller visits with Mark Zuckerberg in his transparent glass office at Facebook headquarters. Prior to Snowden, it was thought or expected the US government must go through several hoops to wire tap you; anything obtained via a third party is fair game.

Documentaries like this are useful, entertaining and engaging, summing up an ever-changing argument. The film contains a coda regarding the David Petraeus affair (in which his emails were eventually read by an FBI investigator), proving no one is safe. The problem is I’m not sure what the solution is (nor does the film provide us with one), apart from moving to a cabin in the woods and going completely offline. The picture Hoback paints is grim; even if the internet or Facebook were regulated and treated as a utility, many of the problems this film presents cannot be solved.

Terms and Conditions May Apply is now in limited release.