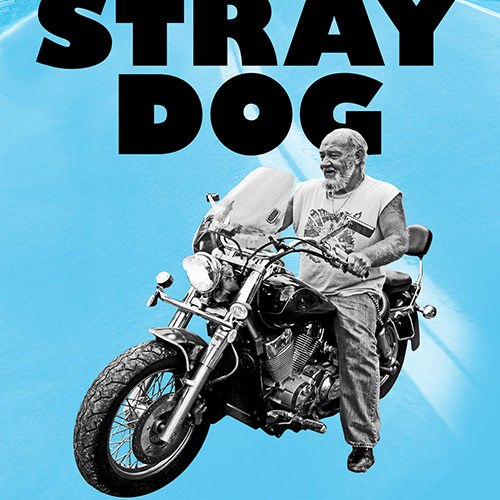 Five years after writer/director Debra Granik‘s sophomore effort Winter’s Bone earned four Oscars nominations including Best Picture, she returns to the big screen with a documentary spawned from her experience filming in Missouri. Far from a novice to the genre-she lensed a documentary called Thunder in Guyana before making her feature length debut Down to the Bone-it may still seem strange she’d follow an acclaimed work of fiction with an uncensored look at an old Vietnam War vet. But as she’d explain it, her craft as a filmmaker comes from documentary observation and to see Ronnie Hall isn’t to forget him. Nicknamed Stray Dog like the title of the film, this aging biker readjusting a solitary life to include a new wife is intriguing enough. Adding his tales of what came before makes it a must-see. Those who’ve seen Winter’s Bone will recognize Hall as local crime boss Thump Milton. Granik met him while scouting the Biker Church of Branson and offered the role, needing his authenticity in look and understanding. That’s not to say Hall is anything like his character despite tattoos, long beard, and leather cuts making him seem like an outlaw straight from Sons of Anarchy. No, it isn’t long before we see he’s possibly the kindest and sweetest man in all of Southern Missouri. Owner of the At Ease RV Park, he survives on the barest of essentials and enjoys each minute alongside his dogs and friends. Keenly aware of what poverty does, Hall’s quick to give tenants extra time on rent knowing they’re trying their best. He surrounds himself with good people and relies on his bike for clarity.

Where we meet him, however, is the start of a new chapter in his life. He fought in Vietnam at seventeen, was thrust into a leadership position beyond his years, and did things he regrets and refuses to forgive himself for doing. Married once before with a daughter and two granddaughters close by, we see the love in his heart wrestling with the emptiness of the memories of lost friends and lives he took. It’s only now that he’s again opening himself up and inviting a partner to share in the rest of his days. Alicia Soriano Hall arrives from Mexico to begin this new life-a spiritual woman who accepts Ron and compassionately readies for the tough nights full of nightmares and screams for help. His love for her becomes paramount to all the rest. The man Granik captures is far from the one he sees himself as in quiet moments devoid of the distractions his active lifestyle provides. We’re exposed to someone adored by all around him. Someone who volunteers to bear witness at military funerals and remembrances, who rides cross-country to Washington DC yearly to visit the names of those he called brothers on the battlefield etched into the Vietnam Memorial’s walls. He’s the first to converse with recently returned soldiers from the Middle East, putting them at ease with empathy and perspective. Introspective enough to see soldiers are necessary for peace despite the wars fought being hatched by old men with money, Hall also realizes the “if you weren’t there, you don’t know” attitude towards those hoping to help only harms veterans’ healing process in the long run.

There’s very much an It’s a Wonderful Life vibe wherein we’re shown so many Hall has touched irrevocably over the years. Whether it’s taking his buddy to the dentist and helping him pull out teeth to save on the bill or driving to Annie Washington’s-mother to a recently fallen daughter at war-so he can redo her kitchen floor, Ron is a saint. It’s no wonder Alicia fell in love with him and looks to bring her twin nineteen-year old sons over from Mexico so they can all live as a family. Seeing him cutely run through computer programs to learn Spanish and assist in her acculturation to America make you wish he could be your friend too. And none of it is for the camera; none to cultivate an image he wants us to believe. Granik takes care to ensure everything’s unstaged and unscripted. One second he’s laughing with buddies over a beer and the next he’s caught without a voice, emotionally wrapped up in the memory of a young man who never came home. Stray Dog becomes a catharsis of sorts, documenting Ron’s tough love, playful acquiescence to his wife giving direction, and the healing facilitated by him for so many. Even so, the film won’t show get him to forgive himself despite so much evidence proving he’s made good on his regrets. What he did at war cannot be excused in his mind, but his story will definitely expose those who don’t know the effects of PTSD to the difficulty so many among us experience. He knows first hand the importance of community and a kind ear.

There are no talking head moments included, just real vignettes of veterans coping with past horrors and present boredom through the adrenaline-rich biker culture. For every shot lingering on the sorrow in the eyes of these men and women comes two of joy in the face of adversity. The birth of a new baby brings with it additional struggle as well as unquantifiable happiness. Alicia’s sons Jesus and Angel moving into the RV Park carries the burden of greater expenses, but also the potential for opportunity and family. Granik puts Ron Hall’s life on display in a way that cuts through surface appearances into the heart of a man who’s done so much for so many. He’s a hero hiding in plain sight-one of many conflicted souls deserving of gratitude and understanding our nation has yet to fully supply.