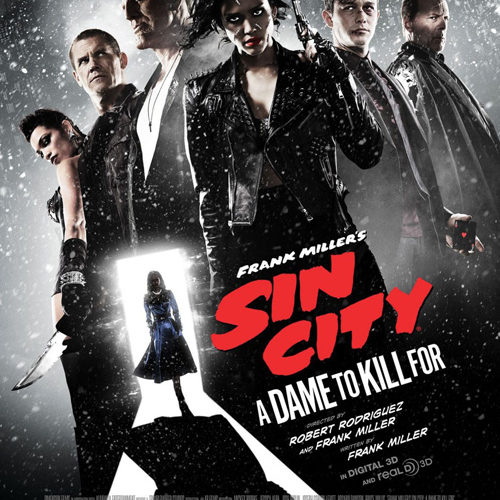 [Review] Sin City: A Dame to Kill For

The world of Frank Miller’s Sin City was a stunner when it first appeared in print in the early 90’s and on the big screen in 2005. Basin City, as imagined by Miller, was a gritty, sleaze-infested, noir-inspired sinkhole dropped into the middle of the American West. Smoke curled into tendriled, threatening plumes, guns fired like lightning cracks in a stormy night, and the men and women who lived there chewed nails and spit out lurid pulp afterwards.

Sin City was called neo-noir, but the truth is that it was far and away from the slow-cooked, curdled tension of that genre. Instead it played like the violent, hyperactive visions that the down-trodden, ne’er do’well inhabitants of noir conceived in their wildest dreams. It was mean, overcooked, juvenile and fascinating. The problem with returning to the well of a stylish original with its hair-on-fire is that familiarity tends to replace surprise and wonder.

It figures then, that Sin City: A Dame To Kill For manages to up the original’s ante of stylized, gob-smacking visuals, lusty affairs, nubile babes, and brutal encounters while still feeling like the reheated leftovers of 2005. Directors Robert Rodriguez and Frank Miller return to a very similar cast and milieu as the original—in some cases trading out one actor for another—and retain the segmented, anthology structure that tells three stories that intermittently intersect with one another. Either plucked from other Miller published tales or wholly created for this outing, the interludes create another scarred, raging portrait of ragged, damaged people colliding into one another in an unreedeemable cesspool. Like the original, the film delights and revels in its debauched and disenfranchised heroes and anti-heroes. Unfortunately, without the nuance or soaking atmosphere of true noir, a second trip to Sin City begins to wear on the audience as much as it does those morally drowning citizens.

Miller, who took a major nosedive when he attempted to bring his version of The Spirit to the screen in 2008, is largely to blame here. He underlines the cruelty and misogyny that rules the streets of Basin City, and the inherently deluded machismo of the male bruisers that wander through its landscape, but he mostly sketches the characterizations with the same kind of thick-lined bluntness he used as an artist when conceiving the likes of Marv and John Hartigan. Both Marv (Mickey Rourke) and Hartigan (Bruce Willis) return—one participates in events prior to his story in Sin City, the other is just a ghost—although they feel more like sign-posts than characters.

Dwight, once Clive Owen, now Josh Brolin, becomes a patsy for the man-eater Ava Lord, played by Eva Green as a beautiful, oft naked female monster who rampages across Basin City with the same vampy relish she afforded 300:Rise of the Empire’s Artemesia. Brolin can’t make Dwight seem sympathetic or dopily heroic as Owen did, and that hurts the fact that his character dominates the drama more often in Dame to Kill For. Joseph Gordon-Levitt as a too-lucky gambler who runs afoul of the distressingly corrupt Senator Roarke (a terrifically loathsome Powers Boothe) gets one of the more entertaining arcs, even if his tale constantly threatens to blow away in the stormy gusts of Rodriguez and Miller’s manic construction. The women are just as vile, vindictive, and occasionally valorous as the men, but they still fall prey to the most violent machinations Sin City has to offer. Miller misses any thematic weight because characters are either instantly fated, or nearly impervious, and both facets drain suspense and drama. Green is excellent, but she stands above and outside the material, in nearly the same way that E.C.’s Crypt Keeper glided above the sordid tales in that horror comic. She’s a part of the major story, but she’s like a Greek deity sashaying past the timid mortals. The enclave of female warriors from the original—Rosario Dawson and her returning compatriots—and Jessica Alba’s tragic Nancy Callahan offer female bluster to match the guys, but they feel like flat comic creatures and Alba’s Callahan gets no sufficient payoff for the added wrongs she’s suffered since the last outing.

The end result of Sin City: A Dame to Kill For is like watching someone play an absolutely gorgeous, endlessly provoking pinball game, with characters errantly smashing into each other, over and over again. The visual look is more textured, detailed and immersive, and it more than ever imagines the interior headspace that comic books and graphic novels can conjure in our psyche. But there’s nothing at all—action, intrigue, or titillation—that provides any lasting juice in Sin City’s tank. All of it feels just too little, too late, and its returning creators are less fastidious and intuitive when framing the new venue.

Perhaps this second Sin City ultimately echoes the original a little too clearly; when the previous adventure snaps into focus, it reminds us how much more effective it was. In its best moments, Dame to Kill For drops us right into the gritty mindset of a good noir comic-book; at it’s worst, we feel like we’re in one of those Looney Tunes detective riffs where a Peter Lorre clone wants to do “terrrrible, horrrrible things” to Daffy Duck.

Sin City: A Dame to Kill For is now in wide release.