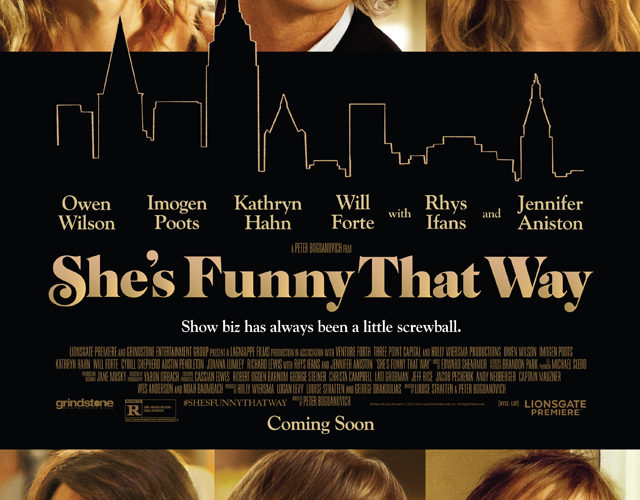 The contemporary is overrated; sometimes, we have to look back in order to move forward; the new is always found in the old. These are some of the obvious mantras of Peter Bogdanovich, quite possibly the most misunderstood filmmaker in all of American cinema. (Just read Vincent Canby’s dumfounded reviews of the otherwise brilliant Saint Jack and They All Laughed.) The plot of his latest film, She’s Funny That Way, is a wish-wash of knots and tangles where, through sheer coincidence, the characters end up whimsically encountering each other. “A city of eight million people and everybody knows everybody.” The ensemble is as follows; Arnold Albertson (Owen Wilson), a successful film and theater director; his actress wife, Delta Simmons (Kathryn Hahn); call girl-turned-actress Isabella Patterson (Imogen Poots); famous Welsh movie star Seth Gilbert (Rhys Ifans); Broadway playwright Joshua Fleet (Will Forte); and his therapist girlfriend, Jane Claremont (Jennifer Aniston). Also throw in an entertainment journalist, a judge, a private detective, an existentialist taxi driver, some police officers, a slew of reformed call girls, cantankerous Brooklynites Richard Lewis and Cybil Shepherd, and Joanna Lumley’s alcoholic shrink, and it becomes quite clear that this film has more imagination than sense. She’s Funny That Way actually conjures images of Barbra Streisand’s’ character from Bodganovich’s 1972 film What’s Up, Doc? Her Judy Maxwell initially seems dumb, silly, and over-the-top, but, before the picture is over, she does more than enough to convince us of her astute wit and intelligence.

Poots is a revelation as Isabella, sporting the thickest of Brooklyn accents — remember, this is not a documentary about Brooklyn — whilst Aniston gives her best big-screen performance to date as the therapist who hates (with a capital “H”) her patients. She sparkles with charm and watch-ability, with one of those faces that seems born to appear on a theater screen. And even though the ending is somewhat of an anti-climax — primarily because at no time are we invested in the romantic outcomes of the characters — this is a film that rattles along and has something to say about originality in cinema and cinema itself. (Plus, there’s a wonderful piece of meta-cinema during the end credits, when one of the characters watches a scene from The Sopranos featuring Lorraine Bracco and Bogdanovich himself.) Bogdanovich also inserts a clip featuring Charles Boyer and Jennifer Jones in Ernst Lubitsch’s Cluny Brown (all films should try to insert clips of Boyer). The link to Lubitsch is an important one. Lubitsch is a director whose films are so brilliantly mounted that they can charm your socks off without touching your shoes, and whose screwball comedies still very much resonate with Bogdanovich — even though She’s Funny is more farce than screwball, a comedy of looks. There now exists too much of a separation between contemporary and “old” cinema, and perhaps Bogdanovich sees his filmmaking role as someone who must bridge that gap. Here’s something that only a true lover of film could make.

She’s Funny That Way will enter a limited release on Friday, August 21st. See a newly released trailer above.