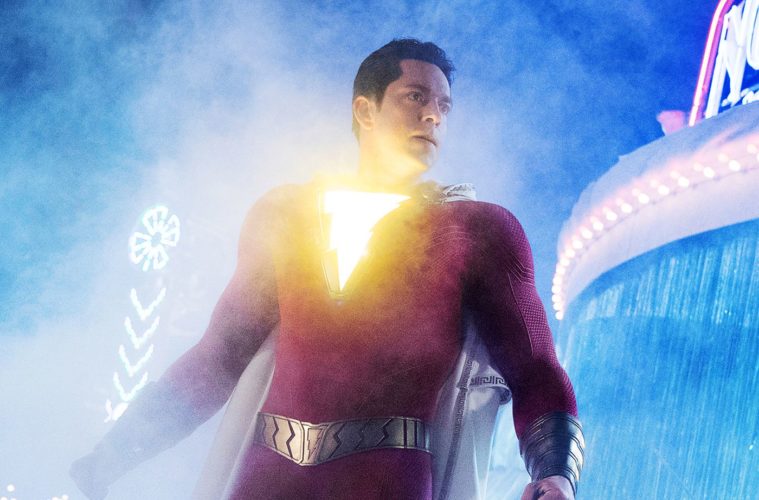 Two boys, decades apart, are taken to a magical realm known as The Rock of Eternity to confront its last wizard guardian (Djimon Hounsou) protecting against the seven deadly sins. One (Ethan Pugiotto’s Thad) is revealed unworthy of becoming this magician’s champion because his soul isn’t pure. Too much anger and resentment for a belittling father and brother fills him with a desire for power, this latest rejection the final straw that ignites his devolution towards evil. The other (Asher Angel’s Billy) can’t be tested since the darkness candidates for champion must refuse is gone, the sins free. The wizard must hope this orphan’s search for love despite a me-first attitude is enough to wield the God-like abilities he’s forced to bestow upon him to save the world.

Those abilities are in the name: Shazam! There’s Solomon’s wisdom, Hercules’ strength, Atlas’ stamina, Zeus’ power, Achilles’ courage, and Mercury’s speed. The combination makes whoever holds them invincible—as long as he/she doesn’t let hubris or selfishness get in the way of justice and heroism. In an era of social media influencer celebrity, a misrepresented wealth disparity on the back of modern serfdom, and an otherwise pervasive sense of entitlement steeped in the fear cycle of privilege, however, that altruism is hardly guaranteed. Add the fact that the chosen one is but a fourteen-year-old delinquent enjoying the escapism of what those powers gain him via popularity and young Billy doesn’t need an archenemy because his own greed and vanity is the worst foe he could ever defeat. Screenwriter Henry Gayden therefore leans into the parallels between Billy and Thad to highlight the differences allowing one to rise above his circumstances while the other falls prey to them. The lynchpin is the notion that “family” isn’t predicated on blood. Biological bonds don’t matter when Thad grows to be a brilliant (mad) scientist (Mark Strong) his equally despicable father would be proud of if he looked past the runt of a nerd he dismissed long ago. And the lack thereof doesn’t corrupt Billy as much as turn him into a mischievous teen harboring an understandable nihilism. The former rejected love because he’d never known it. The latter still has time to find it if he’s willing to accept its arrival from someone other than his birth mother.

So think of the impending adventure like Pandora’s Box. Thad’s malicious plan to find The Rock of Eternity and steal what he believes is his (with the help of the seven sins’ willingness to use him as a vessel to wreak havoc and feed upon humanity’s ever-darkening spirit) threatens the balance we’ve barely clung onto this past century. Only the hope eternal that now resides within Billy can stop him, but first the teen must accept the responsibility that duty demands. Luckily his latest foster home (led by Cooper Andrews and Marta Milans) has enough good-hearted misfits to teach him about strength in numbers. With comic obsessive Freddy (Jack Dylan Grazer) by his side to help unlock his new potential, Billy may discover the dormant heroics hidden within. Horror director David F. Sandberg is the perfect choice to bring this character to fruition because of these nightmarish themes. The sins’ creature design is memorably grotesque and the sense of apprehension as far as Billy living up to a destiny he never asked for is palpable thanks to a resonant backstory rooted in abandonment. That horror mindset leading to effective scare tactics is also perfect for the humor inherent to material centering on a fourteen-year-old with the physique of a thirty-something and God-like powers at his fingertips. If you’ve ever laughed after the shock of a good fright, you know the potency of that release. So while the dour scowls of Batman and Superman race towards danger, Shazam’s (Zachary Levi) wide-eyed panic has him running away.

Nothing is more relatable than a superhero remembering his own mortality before wanting to get as far from the fight as possible. Billy is a kid without a home and therefore without an identity besides that of someone who refuses to rely on anyone but himself. This truth is why one act of selflessness (beating on Freddy’s bullies) is enough to put him on the wizard’s radar at the eleventh hour. When it mattered most, Billy turned around and helped someone who couldn’t help himself. He doesn’t do it every time or even most of the time, but he did it when everyone else merely watched. So while he’ll use his new body to buy beer and hit a strip club, the protector we need is still there. The final result isn’t a knock-out (the time devoted to Thad’s origins is so lengthy that it’s a shame he somehow remains a two-dimensional villain more pawn than tragedy despite Strong’s always-game attitude to have fun being bad), but it’s definitely entertaining. A lot of that success stems from the comedic rapport between Levi and Grazer with the former’s ability to portray Billy’s youthful innocence, frustration, and fear key to the whole’s authenticity. Give credit to their casting and that of the supporting players because Sandberg and company found some real gems in both Billy’s foster brothers and sisters (Faithe Herman’s Darla is a standout) and a few surprise cameos that arrive towards the end. They all possess the pathos and comedic timing to offset Thad’s intentionally overwrought antagonism.

In the middle of everything is Angel’s broken heart causing his Billy to push away those who care about him because he believes the one who should still might. From a playful introduction that shows his streetwise savvy opposite unsuspecting cops to the all-too-real recognition that our dreams are sometimes out of our control, he becomes Shazam!‘s anchor. Levi will be the one you remember because of his childlike enthusiasm when busking as a lightning dancer atop a Philadelphia monument or contagious glee upon discovering he’s bulletproof, but Angel is who grounds those antics to earth so they don’t hijack message for laughter. Their dual role reveals how our capacity for heroics isn’t reliant on powers. Real heroism is what we do without them.