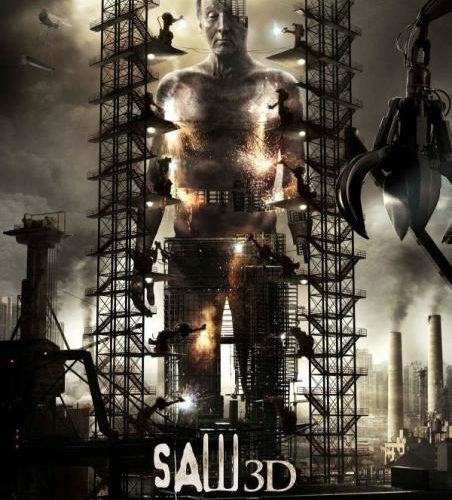 The Saw franchise has operated on a bell curve, where Saw II and III improved on the first, and then it was downhill from there. They serve a purpose and have a strange power. Just as Congress was debating health care reform we got a radical critique of the system in Saw VI (colon Jigsaw Has A Pre-Existing Condition). Perhaps like South Park, the Saw franchise can evolve into topical and politically relevant satire. Like Lionsgate’s other license to print money, the Tyler Perry franchise, I can’t exactly say that quality is improving, but as the go on they certainly are becoming more interesting. This, however is billed as the last of the Saw series, a bittersweet end for an American Halloween tradition initially created by Australian filmmakers and mostly filmed in the Greater Toronto Area.

For those of you expecting a powerful Nicholas Sparks novel-inspired tearjerker of an ending, you will be mistaken. I had hoped for a touching ending, one where Jigsaw had a realization about life just as Gordon Gekko recently did, but no. He attempts to inspire it though.

Saw 3D (or as it’s known in only two dimensions – Saw 2D: The Final Chapter) respects a formula as old as the sitcom. It starts with a teaser – in this case an event that suggests whomever is channeling Jigsaw is injecting himself too closely into people’s private business. Perhaps an easy allegory is to the tea party, but I doubt Saw leans extreme right in its politics.

There are two set-ups, the first dealing with infidelity and the other, racism. Tame as they are, it’s proof it’s getting harder and harder to pull off innovation when we reflect on the series and think “been there, done that”. The moral of this story though is the truth shall set you free with John/Jigsaw showing up once as the elder statesman. He is mostly absent, a conceptual artist with many assistants.

Along the way it does contain a few shocks, no one is innocent and the bodies pile up as you’d expect. What I didn’t expect is that while recycled, it is fun and engaging in an altogether different way then emotionally. We don’t care about the characters. They are archetypes we dislike: lying lawyers, seedy PR reps, and so forth. It is watching the clock tick down, imagining how far the filmmakers will take it, that effective tension is built. Director Kevin Greutert edited the first five Saw films and calls upon this skill, building fleeting tension, even if his films lack the demented traps of Darren Lynn Bousman’s Saw II and III.

The 3D effects and cinematography work and there is certainly a difference between a converted 3D film and film shot and composed for 3D. Saw 3D delivers what it sets out to with a tad more under the hood than the average slasher film might have. Perhaps in the inevitable reboot they may dive into the realm of S & M. Surely they are almost there in how some of the women are sexualized in the moments before the blade. Consider a fantasy sequence in which a women is penetrated in the stomach with a phallic blade. Film scholars researching gender and sexuality in horror – you may cite me.