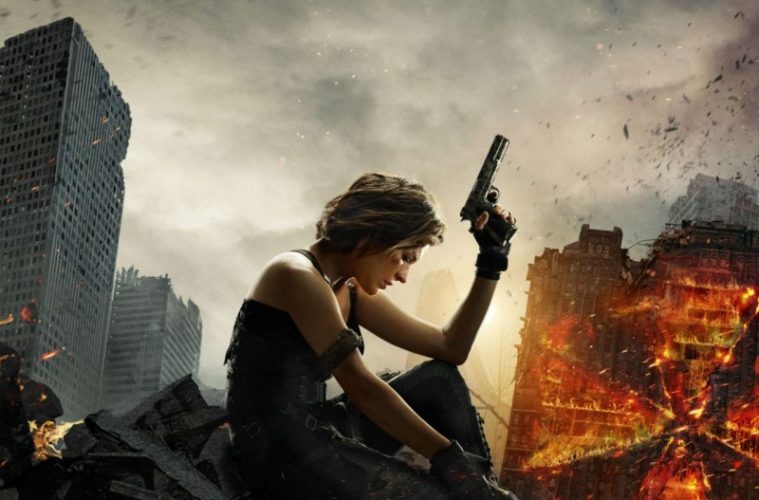 Let’s get this out of the way, vulgarians: Resident Evil: The Final Chapter is a bit different than the past Paul W.S. Anderson-directed entries. As evident from its initial trailer and clips, hand-held camerawork and frenetic cutting have come to replace the balletic action choreography praised as “bodies in motion and / or space” by numerous online film pundits. Which is not to act as if Anderson handed off the reins of his beloved franchise to Olivier Megaton or somebody, but this newest installment can’t necessarily be treated as another victory lap for Anderson’s superior technique. (Don’t worry: there are still plenty of corridors and trap doors to waltz through.) Yet once one is acclimated to this chaos-cinema form, even if it’s a bit more assaultive in post-converted 3D, the writer-director’s simultaneous economic storytelling and boyish imagination come into clear view.

It may have seemed he’d exhausted everything he could possibly do with these last two installments, set-piece-wise, yet Anderson is far from out of ideas. The Final Chapter is nearly as brazen and bizarre as the previous entry, Retribution, if only for beginning with his and star Milla Jovovich’s daughter as the digitized villain The Red Queen — certainly suited to a series built on the idea of video-game-like multiple lives and armies of clones. (This idea becomes even more apparent with a third character, also played by Jovovich and not to be spoiled.) If the “grittier” form does, at times, lend a tinge of self-seriousness to the typically flat non-Jovovich acting and dialogue that comes with this series, there is, at 107 minutes, blissfully little of it. Opening in the ruins of the White House (no further topical comment needed), series heroine Alice wakes up in a full-out apocalyptic wasteland closer to the third installment’s desert setting, not the Toronto Plays Itself aesthetic of the past few. The promise of a cure for the zombie hordes puts her a on a deadly collision course with series villain Dr. Isaacs (Iain Glen), who appears in his first Anderson-directed chapter. The antagonistic Umbrella Corporation is cleverly reduced to the abstraction of a tank plowing in circles through the hellscape towards no further goal but an even deader earth, and Alice is reminded of humanity when encountering a band of survivors taking shelter in what remains of the still-hilariously-titled Raccoon City, which includes series regular Claire (Ali Larter).

It swiftly establishes this makeshift post-apocalyptic society that embraces Alice, and, having seen six movies now, we can just assume the conditions that lead to such quick unity. Our assembled team ventures down into the Umbrella Corporation “Hive,” seen in the first film, to make humanity’s last stand. One cannot stress enough the focus and simplicity of Anderson’s plotting, no matter how strange the proceedings get: the goal of the unit is always clear, be it the chamber they need to go down or object to retrieve — a kind of forward momentum that acts as a middle-finger to the turgid world-building of comic-book franchises. But by film’s end, Anderson has the gall to produce an image somewhat akin to the climactic beauty from the throes-of-death tableaux of his previous film, the Titanic-aping Pompeii. Amidst this, something genuinely moving emerges: the repeated gesture loaded with the weight of six films rather than the thinly sketched investment in two charisma-free young performers. Alice seems doomed to re-spawn entry after entry. Would that kind of doomed life mean something more to an audience if the character was developed in the terms of the “new novel” known as prestige television’s Tradition of Quality? Perhaps, but investing in a character developed purely over the course of a series through movement, attire, and charisma seems, if anything, earned rather than forced upon you.

With Anderson and Jovovich’s creation of Alice, one can’t help but think of the concluding exchange from John Carpenter’s Ghosts of Mars about kicking some ass being a God-given mission in life. And maybe you’re a much better person than this writer if you don’t find that rousing as hell.

Resident Evil: The Final Chapter is now in theaters.