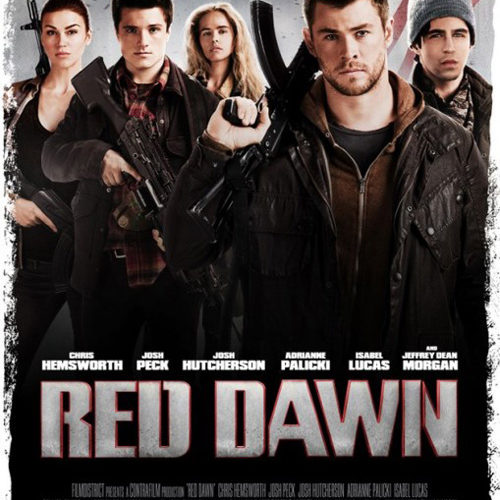 The 1984 Red Dawn is a product of its time — bloated, overly serious, goofy and technically clunky. It is pure 80s cheese. Parts of it can be enjoyed on an ironic level, but it’s easy to say this 2012 remake won’t be treated with that kind of acceptance. This time around, it isn’t the Soviets attacking this small American town (or even the Chinese). Thanks to post-production and plenty of bad dubbing, it’s the North Koreans! But, as the brass behind that decision would say, “What’s the difference?” Chinese or North Korean, every single one of them will still be portrayed as hilariously evil. The plot and stakes remain more or less the same: a bunch of rowdy teenagers revolt against their evil invaders. As their town is under a new order, Jed Eckert (Chris Hemsworth), Matt Eckert (Josh Peck), Robert (Josh Hutcherson), Eric (Isabel Lucas), Toni (Adrianne Palicki) and a few other kids who aren’t of any real narrative importance take a stand. Through the leadership of Jed — who is the young protagonist’s estranged brother who happens to be a super soldier — the teenagers learn to fight back and become an inspiration for the town. They are the “Wolverines,” which Robert shouts in a fan-pleasing — or pandering, depending on how you take it — manner.

They are outnumbered and outgunned, but since they are Americans there is no chance of them losing. The problem is, we never care if they win. If it wasn’t for Peck, perhaps we could. The actor, who gave a memorable performance a few years ago with The Wackness, sinks this movie. He doesn’t have the presence for the hero archetype. Peck as the grunt of the group makes sense, but when it’s time for Matt to give a rousing speech, it rings false. Then again, the failure of Matt as a lead isn’t completely Peck’s fault. Screenwriters Carl Ellsworth and Jeremy Passmore take every chance they get to paint Jed as a whiny, unlikable, and selfish lead. The first hour or so of the movie he makes mistake after mistake. Once the character gets one of his friends killed, any possible investment which could be made for Jed disappears. Before the film goes into its climax the stakes don’t matter anymore.

Not even Dan Bradley‘s set pieces can overcome the lack of suspense and consequence here. The former Bourne series stunt coordinator must have misinterpreted Paul Greengrass‘ POV action style, since all he does is shake the camera at whatever moves in Red Dawn. The camerawork in the Bourne films were character-based, while Bradley uses shaky-cam as if it’s the only trick in the book. Not only does Red Dawn lack the smarts and skill of Greengrass’s Bourne movies in terms of action and plotting, but more importantly, the entertainment value.